The new year is starting off big for bitcoin investors as the price of the cryptocurrency returns to levels not seen for three years. The BTC/USD exchange rate now stands at just over $1000, an impressive benchmark figure that was last achieved at the start of January 2014.

At the same time, the overall market capitalization of the entire bitcoin blockchain is now valued at well over $16 billion thanks to the high price of cryptocurrency. Due to the fact that many new bitcoin blocks were mined since the BTC/USD exchange rate was at its height, this is a new all time high for the valuation of bitcoin. To put things in another perspective, this is still much smaller than PayPal’s market cap at $47 billion and implies that there is plenty of room to grow.

Trading volumes also set a new record for bitcoin in the last twenty-four hours. USD trading alone reached about $163 million, with total activity on Chinese exchanges estimated at ten times this figure. Speaking about the Chinese market, the exchange rate at all the biggest bitcoin trading venues in China now stands at 7270 CNY, almost $1050 already.

As we have said before, the driving forces behind the recent explosive bitcoin rally are geopolitical volatility, the war on cash, and above all, the devaluation of the yuan and the desire of Chinese investors to diversify to a non-government controlled store of wealth. 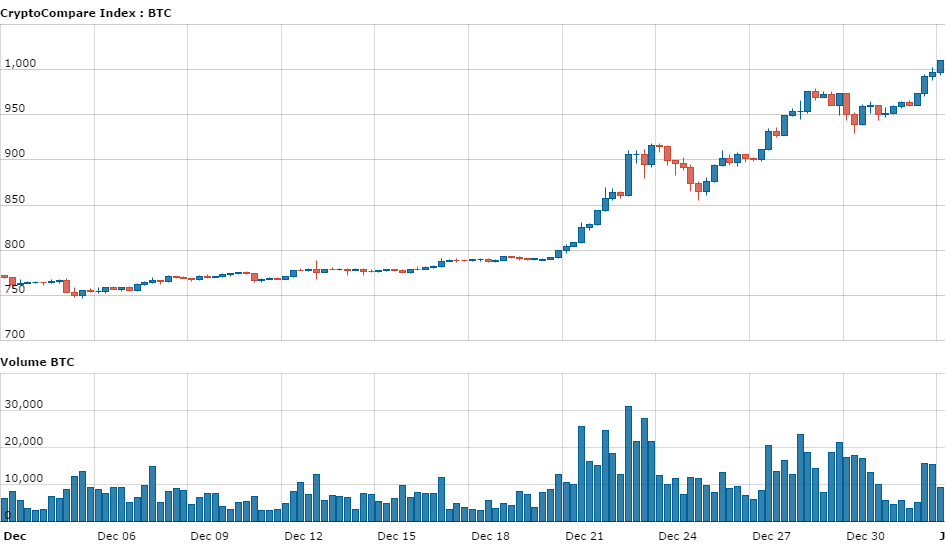 Many articles are focused on the price of one (1) Bitcoin. Rather than focusing on the price per coin, they might be better off focusing on the market cap of bitcoin (number of bitcoins available times the price of one bitcoin). The following website shows the current market cap of all Gold in the world: http://onlygold.com/Info/All-The-Gold-In-The-World.asp . It is nearly $7 trillion USD. Contrast this with the market cap of Bitcoin. Roughly 16.1 million x $995 is $16 billion USD (you can monitor this accurately on http://coinmarketcap.com/. Gold market cap is 431 times larger than the Bitcoin market cap. Or… Read more »