The BTC/USD exchange rate has just marked a major milestone with a two-and-a-half year record of $700. Just last Sunday the rate was around $575, making today’s record an increase of over 21% in just seven days. Furthermore, the recent rally in the price of Bitcoin was already going strong, having jumped about 10% from the previous week.

In terms of value, the total capitalization of all bitcoins in existence is now standing at about $11 billion again, a benchmark not seen since January 2014. For comparison, the market capitalization of online money transfers firm Paypal (NASDAQ:PYPL) is about $44 billion, already just about four times that of the bitcoin network.

The rise in the value of Bitcoin has not come at the expense of competing assets. Ethereum market cap is now at $1.36 billion, having reached its own record of $16.9 and dispelling the belief that the two leading cryptocurrencies are cannibalizing each other’s market share. In addition, the overall market capitalization of all cryptoassets combined is now around $13.5 billion. 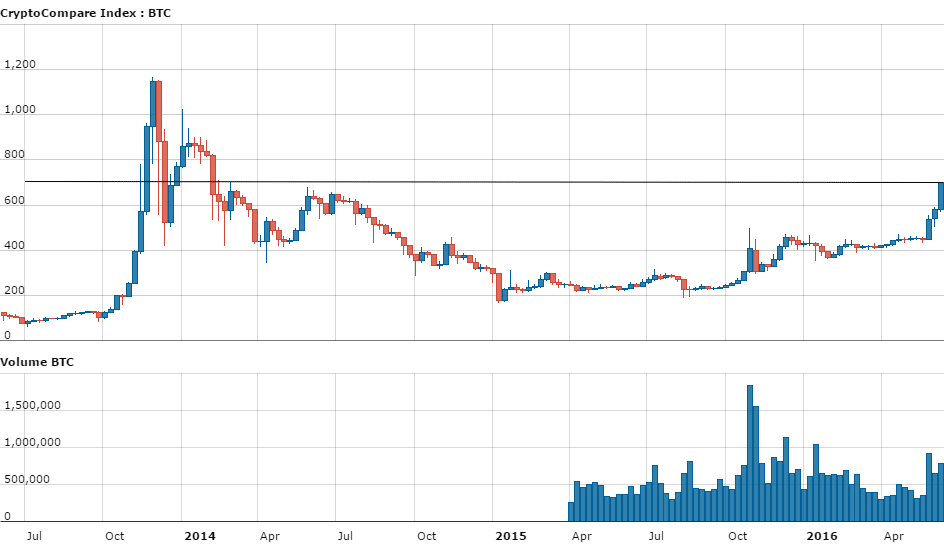 Charles Hayter, the CEO of CryptoCompare.com, commented on the situation and the possible causes: “The IMF warning on Chinese corporate debt levels, have prompted traders with yuan exposure to look for safe harbor. Bitcoin fits the bill as a form of digital gold.

The past month has seen bitcoin climb 50% to $684 on the CryptoCompare Bitcoin USD Index, as global systemic risks, especially from China, weigh on international equity markets. Traders see bitcoin as immune and are using it as a means to park cash – a flight to safety.”