When advocates for newer cryptocurrencies say that they offer superior technology, bitcoin supporters many times answer that its legacy as the first blockchain based asset make it the gold standard – and now this appears to be proved correct. As world opinion, pollsters and the media are all shocked by the surprise win of Donald Trump, investors globally are dumping many assets but a few considered shock-resistant: gold and bitcoin.

The BTC/USD exchange rate now stands close to $739 and generally is moving around but above $375. Only yesterday it was stuck around the $700 level so it can be said that President Trump delivered a 5% increase to bitcoin prices. The trading volumes supporting the move are also impressive at about $120 million in USD pairs alone.

This move helped bitcoin completely erase the drop after rumours came out of China that is looking for ways to stop bitcoin transactions again. The exchange rate has even rose higher when than the release of Segregated Witness, SegWit, marked the possible beginning of the end for the Bitcoin scaling debate. 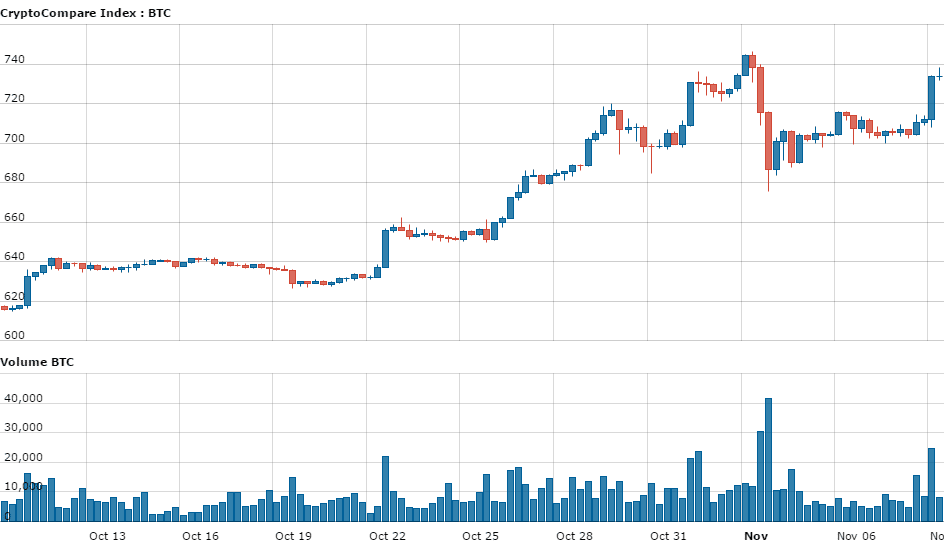 Charles Hayter, the CEO of CryptoCompare.com, comments: “The Trump presidency brings uncertainty to the world stage – along with Gold, Bitcoin is being used as a hedge to global troubles. This is Brexit on steroids in terms of its calamitous macro political shifts to the status quo. The key thing is people do not know what Trump means – its uncertainty and that gives bitcoin momentum.”