The BTC/USD exchange rate is now back again comfortably above the $650 per Bitcoin benchmark level for the first time in three months. The most plausible reason for the move, according to cryptocurrency community forums, is that Chinese speculators and investors are returning to Bitcoin following the recent yuan devaluation.

One event that might have triggered the BTC price jump (of about 4% in one day) is a huge conference of bitcoin miners (considered to be the biggest ever) on Saturday in the capital of China’s Sichuan province – the mega city of Chengdu. This General Assembly of Chinese miners was hosted by Bitmain, the world’s largest bitcoin mining hardware producer.

The excitement around this event apparently helped Bitcoin recover to price levels not seen since July and the Bitfinex Hack crash. When the exchange revealed then that it suffered a major loss due to a “data breach”, the price dropped to as low as $480 overnight before recovering some of the losses. Now it seems that cryptocurrency traders are willing to forget about the $65 million that were stolen from Bitfinex or have otherwise regained trust in their own security arrangements. 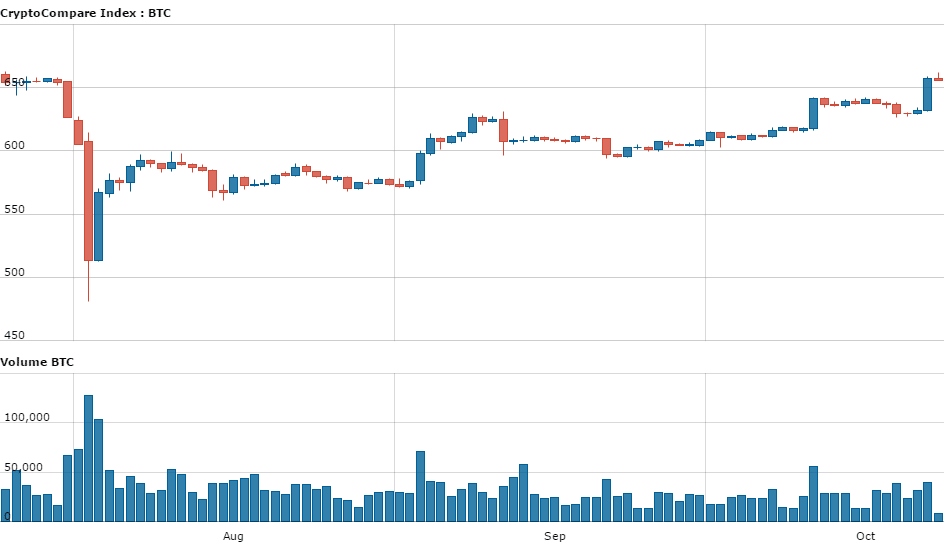 Explaining how he sees the situation, Charles Hayter, the CEO of CryptoCompare.com, says: “The Bitcoin price surge was led by optimistic Chinese traders on the back of support for Bitcoin unlimited and a fix to the Bitcoin scaling debate. Renminbi pairs led, leaving the USD markets lagging at over a $20 discount.”

I’ve read an article in Coindesk written by Akin Fernadez , Why Central Bank Will Fail at Digital Currency (june 13, 2016). Mr Fernandez claims many things that I can’t prove right or wrong. He says blockchain and bitcoin can’t be separated from each other, that bitcoin was created to destroy the Federal Reserve, that banks representants have no understanding of computors and that they’re computor illiterates, just as I am. Are those blockchain developers from all over the world completely out of the track? Help me, OB1, you’re my only hope although I’m no princess.