Sunny Decree became the latest crypto Youtuber to be targeted by Youtube when the platform suddenly cut off access to a live stream he was broadcasting this weekend. At the time, the video was said to be violating Youtube’s ‘harmful and dangerous’ policy.

According to a tweet from Sunny Decree posted on September 5th, the Youtuber was warned that a second infraction will result in a one-week suspension of service. 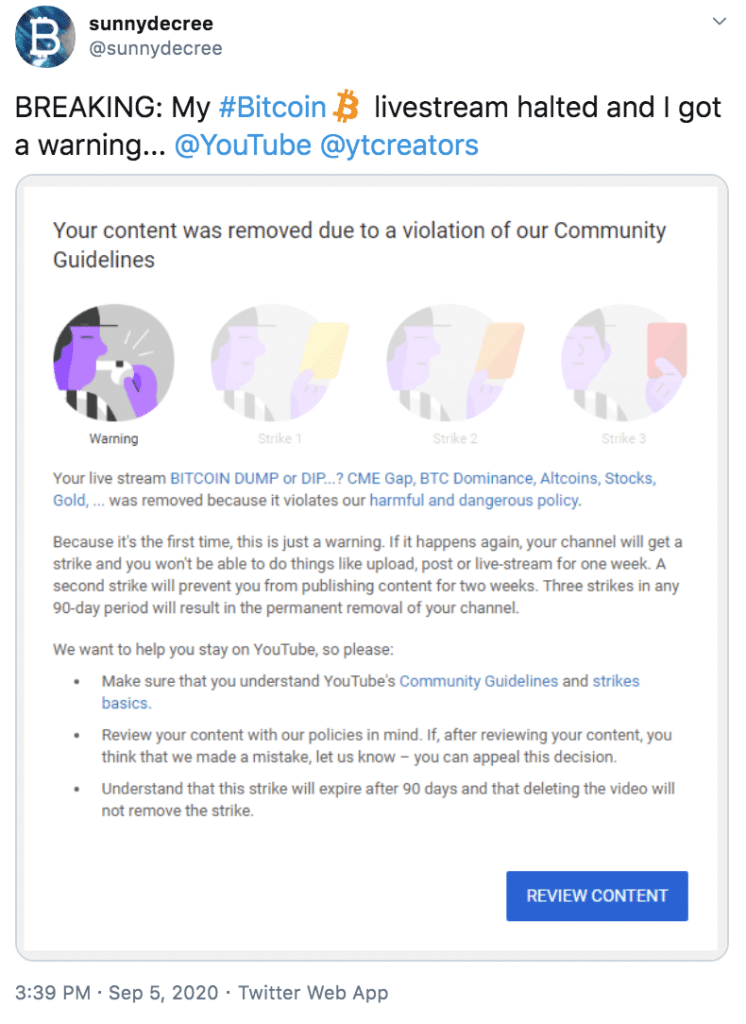 While it was not clear exactly what part of the livestream had violated Youtube’s policies, this is not the first time that the platform has targeted crypto-related content before. In fact, Sunny’s channel was also reportedly affected in December of 2019 when Youtube went on a video-deleting spree, suddenly purging content from accounts associated with a number of crypto Youtubers.

There have also been a number of incidents since then when Youtube has suddenly made the decision to cut access to content made by crypto Youtubers, including in June, when Youtube shut down the account of crypto news site Crypto.com citing “a violation of YouTube’s Terms of Service.” However, the channel was restored two days later.

In March, Finance Magnates reported that Youtube banned another well-known crypto programmer’s channel, Ivan on Tech, and deleted one of his videos as a result of a breach of YouTube Policy regarding censorship. Again, access to the channel was restored relatively quickly.

Crypto Giveaway Scams Are Still a Problem on Youtube’s Platform

Why is Youtube going after all of these channels?

The trouble seems to be that there actually are quite a lot of Youtube channels and videos that are using crypto-related content to maliciously target viewers. For example, cryptocurrency ‘giveaway’ scams have populated the platform with false promises of free coins.

Indeed, viewers of these videos are encouraged to send cryptocurrency to an address with the promise that it will be sent back to them two-fold. However, the attacker simply keeps the coins and never gives them back.

Charles Hoskinson, the creator of Cardano (ADA), condemned one such scam in a tweet in July: “It has come to my attention that a scam has been floating around using my conference keynote to promote a giveaway…this is a scam,” he wrote on Twitter. “Please report it to YouTube. We will take legal action if we can against those responsible.”

Finance Magnates has also previously reported that along with Charles Hoskinson, the identities of Ethereum founder, Vitalik Buterin and Gemini founders, Tyler and Cameron Winklevoss have been used in similar scams.

You are being very generous with youtube. They simply don’t remove the real scammers while they crack down on legit youtubers. The Vitalik giveaway scam has surfaced dozens of times in the last month on my screen alone