Roger Ver, Bitcoin evangelist and angel investor, will help get you there. For the right price. A $400,000 investment, held for a minimum of 5 years, or a $250,000 donation to the island gets you a second passport allowing visa-free travel to 120 countries, near-zero taxes and the opportunity for a leisurely, worry-free lifestyle on the scenic tropical islands. With a population of 51,000, the place is smaller than Isle of Man.

Ver is helping to facilitate those looking for citizenship through his latest venture, Passports for Bitcoin. Bitcoins are being featured as the method of payment. They escape the scrutiny of authorities looking to detect the movement of large amounts of money. The Chinese are also targeted, since with conventional money, they are capped at moving $50,000 annually. 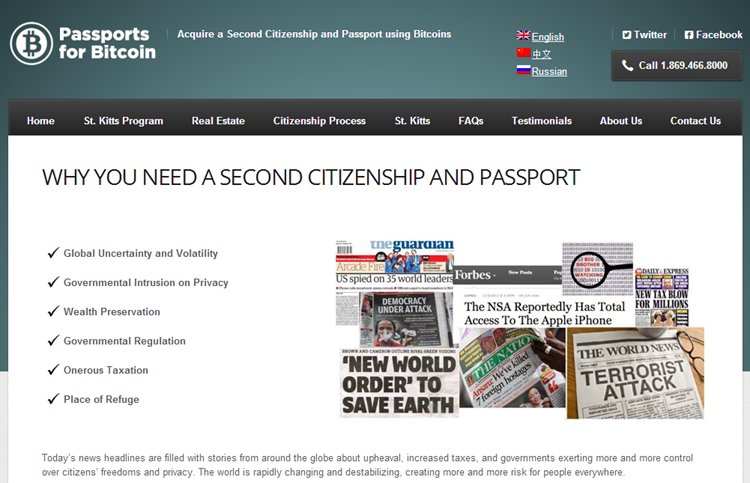 Ver is also known as “Bitcoin Jesus” for his seemingly prophetic view on bitcoins. He invested in tens of thousands of bitcoins in 2011 when they were worth around a dollar. They are now worth $600.

He was already a millionaire by the age of 25 through a computer parts business. He spent 10 months in jail for selling 14 pounds of explosives without a licence on eBay. Ver says his product was basically a firecracker to scare birds away from cornfields. From there, it was all downhill between him and the U.S. government, culminating in his renouncing of U.S. citizenship. A record 2999 Americans did the same in 2013, many of them wealthy seeking to avoid the tax reporting requirements imposed even on those living abroad.

Not everyone feels so rosy about St. Kitts. John Christensen, director of the Tax Justice Network, says that the island’s passports are used to evade taxes:

“To be blunt, we talk about places like St. Kitts as places where you go to escape from responsibilities…St. Kitts sells secrecy on the international market and, unsurprisingly, attracts all types of dirty money.”

At least in the case of Bitcoin, the tax department doesn’t consider it money, even if dirty.