It has been discovered that Google Finance also covers Bitcoin. This follows Tuesday’s revelation of Yahoo’s addition on their Finance portal.

Like Yahoo, the performance has been a bit choppy but appears to have the essentials. Currently, there appears to be a 3-5 minute delay. It is therefore difficult to gauge which exchange they’re tracking. Assuming no averages are being taken, it looks like either Bitstamp or BTC-e. 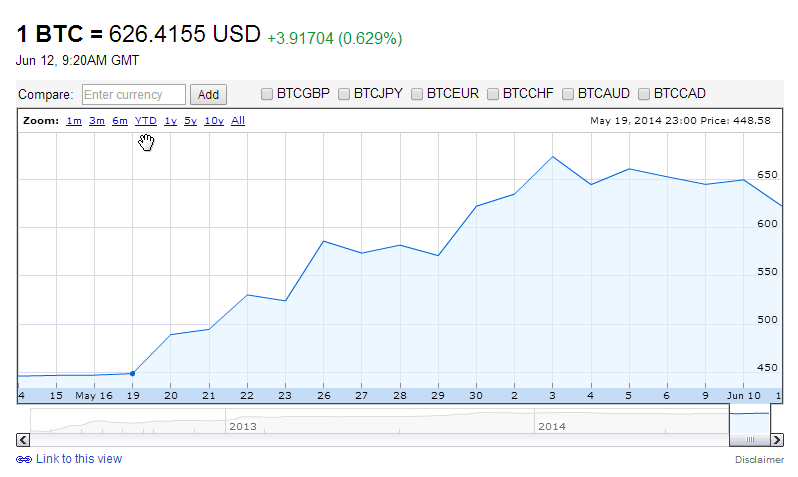 The BTC price is found by typing CURRENCY: BTC. It is indeed tracked like a currency, not an asset (this should be brought to the attention of the IRS). The default pairing is with USD, but GBP, AUD, CAD, EUR, CHF and JPY can also be chosen.

(A search for CURRENCY: LTC returns LTC Properties, traded on the NYSE.)

While many are saying Yahoo beat Google to this one, this is not necessarily the case. Both were discovered by users testing out various entries until they got a hit. Recall that neither Google nor Yahoo made any announcements about the additions, which are probably part of some quasi-pilot testing. Depending on how frequently enthusiasts have been trying to discover them, they could have been around for longer.

Nevertheless, many Bitcoin backers are excited by these moves. For them, not only is Bitcoin becoming more mainstream. It’s likely garnering the interests of Wall Street as well. This hasn’t been reflected in BTC prices though, which fell as much as 5% in a 6 hour stretch and now sit near $625.

Bing started quoting BTC prices in February. They even return the price in a regular search query, something Google isn’t (yet) doing.

For Google, Yahoo, Bing, Bloomberg and any other major financial portals making the dive (Reuters next?), they have can have their cake and eat it too: quoting the Bitcoin price doesn’t have to mean they’re committing to choosing the path of crypto, just like price quotation for any asset doesn’t imply their ideological support.

Yet they can still enjoy the boost in traffic they’ll undoubtedly receive from the large and enthusiastic crypto audience. They have likely noticed a spike in bitcoin-related traffic during the past year and decided that it cannot be ignored. Granted they’re coming very late to the game, but they have the brand. In hindsight, it seems like a no-brainer.

However, eBay, PayPal, Amazon et al are in the business of e-commerce. For them, there’s no middle ground. Accepting bitcoins as payment seems to be, right now, a much bigger deal.

Share this article
Tags: google
Got a news tip? Let Us Know