When it first became clear that the internet will totally change the way the economy works, an amazing amount of hype drove the valuations of companies that offered nothing and had no revenues to incredible highs just because they were linked to the web. This in turn lead to the dotcom bubble crash, which killed off many good ideas along with the bad.

Now, as blockchain technology promises to completely disrupt the business world yet again, we might be seeing the same dynamic developing with ICOs (Initial Coin Offerings) – raising hundreds of millions of dollars with no product at hand. Moreover, people from the cryptocurrency community fear what they see as bringing systematic risk to the Ethereum ecosystem.

Providing a satirical look at how some ICOs are just blatant attempts at crash grabs is the new parody Useless Ethereum Token. The stated goal of this honest crowdfund is to buy a big-screen television for the founder, reminiscent of the infamous potato-salad kickstarter. 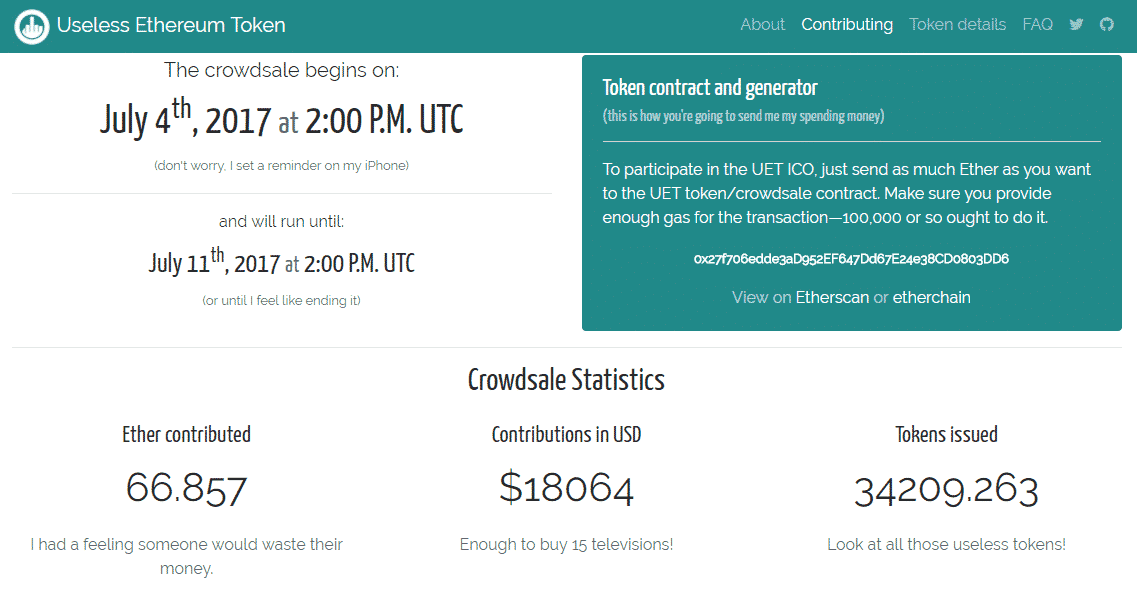 The founder writes:  “Let’s be honest—everyone’s tired of ICOs. They get hyped up for weeks, and then they launch and clog up the Ethereum network for days, Coinbase goes down for a while, and then “investors” see the new tokens lose most of their “value”. This ICO is going to be different.

I learned all about Ethereum smart contracts and Solidity over a weekend so I could launch this ICO. Most of the smart contract contract code is copied from GitHub and Stack Overflow posts, so it should be pretty much right… right?

Also, I definitely didn’t have any smart contract experts look at the contract before I launched it. I mean, why bother? All the other ICOs go through weeks of auditing and they still end up with bugs and vulnerabilities in their contracts.”

If you are looking to invest in ICOs and want to protect your funds, try to do some due diligence and find worthy projects before sending money to people you don’t know. For guidance see our recent interview: How to Keep Safe as ICO-Mania Takes Over Crypto World.

Share this article
Tags: crowdfunding / Ethereum
Got a news tip? Let Us Know