JP Morgan CEO Jamie Dimon’s volatile relationship with Bitcoin has long been a topic of conversation within the cryptosphere.

The “I-hate-you,” “I-hate-you-not” remarks that he has made about BTC and other cryptocurrencies have been part of the narrative that has shaped the public’s perception of crypto: it’s a “fraud,” he said. No, wait, it’s not a fraud–in fact, “the blockchain is real.”

But actually, “I’m not interested that much in the subject at all,” he said. (Sure, okay.) 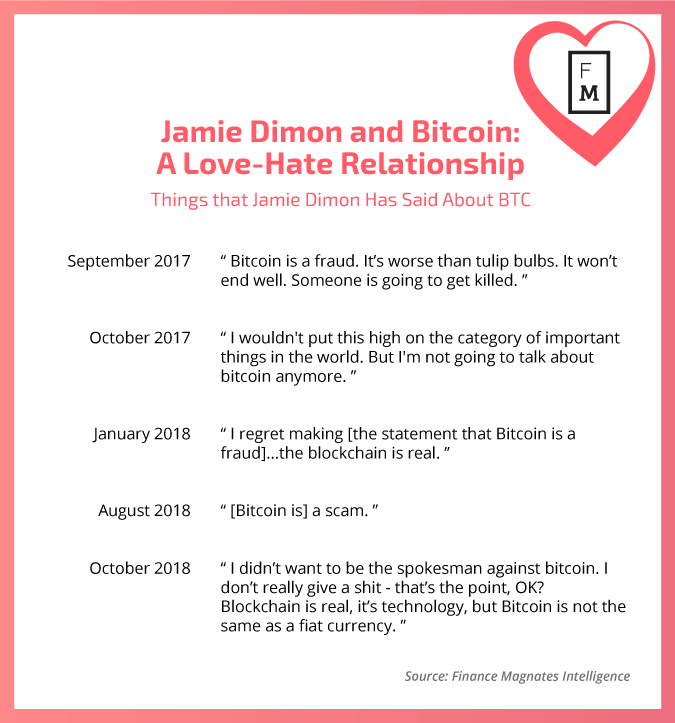 However, Vaibhav Kadikar, CEO and Founder of CloseCross, told Finance Magnates that Dimon’s past criticism “isn’t necessarily at odds with the launch of its own cryptocurrency, the JPM Coin, to settle payments between clients instantly,” although it remains to be seen whether the JPM Coin will suffer as a result” of Dimon’s statements.

But “if stability, predictability and usability are what the user values, while still having the transparency provided by blockchain/DLT, then this is an excellent move,” Kadikar said.

Essentially, even if Jamie Dimon doesn’t have a deep interest in cryptocurrency and blockchain technology after all, what matters is that his company certainly does. JPMorgan Chase became the first major US bank to roll out a cryptocurrency last week with the launch of ‘JPM Coin’ on February 14th, Valentine’s day. The coin will begin testing in several months, according to a CNBC report.

But even though JP Morgan has decided to call its new coin a “cryptocurrency,” the bank doesn’t seem to have warmed up to the idea of cryptocurrencies as most people know and understand them. In fact, JPM Coin has been created to operate very differently than Bitcoin and other volatile public cryptocurrencies. JPM Coin is a pegged stablecoin–in other words, each JPM Coin represents a stable value of USD$1.

The coin will be used to settle payments between the bank’s clients. CNBC reported that the coin would initially be used as a vehicle to carry only a tiny portion of the bank’s transactions, which amount to more than USD$6 trillion on a daily basis. The coin will primarily run on Quorum, the bank’s own private version of Ethereum.

The company apparently sees JPM Coin as a move toward a new standard technology in global financial infrastructure rather than an experimental pet project. “Anything that currently exists in the world, as that moves onto the blockchain, this would be the payment leg for that transaction,” said Umar Farooq, head of J.P. Morgan’s blockchain projects, to CNBC.

“The applications are frankly quite endless; anything where you have a distributed ledger which involves corporations or institutions can use this.”

Implications for the Banking and Cryptocurrency Industries

JP Morgan’s decision to move forward with the project represents one of the first large-scale “real world” blockchain applications in history. Sure, other big players in the financial industry have flirted with blockchain and cryptocurrency–but none has ever taken real concrete steps toward launching a product.

In fact, many have taken active steps away from even allowing their customers to touch crypto. JP Morgan itself, along with two other lenders, blocked their credit card holders from buying cryptocurrency last year; Goldman Sachs briefly explored the idea of launching a Bitcoin exchange, but ultimately decided against it. Not to mention the many failed attempts by various institutions within and without the cryptocurrency space to launch a Bitcoin ETF (exchange traded fund.)

Fabio Canesin, co-founder of decentralized platform Nash, told Finance Magnates that the launch of the JPM Coin represents big things for both the banking and cryptocurrency industries.

“For banking, it means that the biggest player in the U.S. is not only experimenting with blockchain but has recognized its technological superiority in comparison to current settlement solutions,” he explained.

A Heaping Dose of (Unintentional) Validation for Crypto

Canesin also pointed out that JPM Coin is likely just the start of JP Morgan’s blockchain initiatives: “How the product will continue to expand remains to be seen, but the coin that JP Morgan has announced must be far from their final aspirations,” he said. “Blockchain technology isn’t limited to representing currencies such as the US dollar, but could carry every asset recorded in those legacy ledgers today, like stocks and bonds.”

The launch of the JPM Coin has also handed quite a bit of credibility over to the cryptocurrency industry. “For crypto, this is a huge validation of its base technology,” Canesin explained. “Not that the crypto industry needed it, but this is a validation coming from the banking industry – and it’s being proclaimed to the world, where regulators and customers are listening.”

Canesin also pointed out that boosting blockchain’s value as a settlement tool also indirectly bolsters the vision of a decentralized financial system. “We have to remember that the radical proposal of cryptocurrency is decentralization,” he said. “Better settlement is a byproduct.”

“Blockchain technology permits currencies that follow stable rules, without any central bank. JPM Coin is no competition for cryptocurrencies’ fundamental value proposition, as it is pegged to the US dollar, a centralized currency controlled by the Federal Reserve. JP Morgan is one of the biggest shareholders in this institution, and was pivotal in its creation a century ago.”

Is JPM Coin Even a Cryptocurrency? It Depends Who You Ask

Some voices within the cryptocurrency have gone so far as to say that the JPM Coin really doesn’t even deserve to be called a “cryptocurrency” after all.

If JPM Coin is a cryptocurrency, then so is Fortnite V-Bucks.

“If JP Morgan’s new coin operates privately and is only used for money transfers between the lender and its clients,” (which it ostensibly does), “it would not operate on a public network in the same way that cryptocurrencies such as bitcoin or ethereum do,” wrote tech reporter Madhvi Mavadiya in a Forbes report entitled “Stop Calling JPMorgan’s JPM Coin A Cryptocurrency, Because It’s Not.”

Speaking of “everyone calm the F down,” JPM Coin is a stablecoin on top of a permissioned blockchain. Super conservative for crypto.

It’s a newsworthy development but it’s not a “threat” to btc nor is it some sort of capitulation.

So cool it with the shrill takes. pic.twitter.com/ynXVNrv6T0

How Important Are Semantics Here, Anyway?

Grant Blaisdell, co-founder of Coinfirm,  said that the debate over whether JPM Coin deserves to be called a cryptocurrency.

“That debate sits on many things, some of them subjective. For example some say it’s not a cryptocurrency because it’s not a public blockchain, while there are other ‘major’ cryptocurrencies that follow a similar model,” he said in an email to Finance Magnates.

And indeed, what is a true cryptocurrency? The term has been so widely used, misused, misapplied, and misunderstood that many definitions of the word have flourished in different parts of the internet and the media.

What Are the Differences Between JPM Coin and Major Cryptocurrencies?

“The word ‘cryptocurrency’ can be misleading as it is a very general term comprised of two parts,” said Mark Moss, founder of Signal Profits, to Finance Magnates. “‘Crypto’ for being cryptographically secured, and ‘Currency’ for being something that could be used for payments like a currency.”

“So, technically speaking, JPM coin is a cryptocurrency as it fits the definition,” he said. “However, this brings us to a better conversation as to what are the differences of major cryptocurrencies and JPM coin.”

“The big difference is that Bitcoin and Ethereum are ‘open and trustless’ networks meaning everyone can see the code and the transactions so there is no need to ‘Trust’ the network as its visible and open for everyone to see that there is no manipulation going on. They are also ‘permission-less’ meaning anyone can join the network and participate.”

“JPM Coin is neither,” he said. “It is closed off, private, and permissioned, the entire purpose and use of JPM Coin is the exact opposite of what Bitcoin and Ethereum provide to the market.”

Additionally, “Bitcoin was created to ‘bank the unbanked’ and provide financial services to all without the need for the bank. And there are many benefits to end users for this. JPM coin benefits the ‘Bank’ only, as if they are installing a new computer system internally, and at the end of the day, I do not see this being a benefit for anyone else outside the bank.”

Still, the cryptocurrency industry could benefit from the association with JP Morgan Chase, even if the JPM Coin isn’t really a tool of decentralization. Bloomberg reported on February 19th that a boost in the price of Bitcoin was likely due in large part to JP Morgan’s public “embrace of cryptocurrencies.”

Bitcoin is getting a delayed boost from the announcement that JPMorgan has developed a digital coin to speed up payments between corporate customers ? https://t.co/L9eQ5YBxZ2 pic.twitter.com/mAvqXj8ZQe

Mati Greenspan, senior market analyst at eToro in Tel Aviv, told Bloomberg that “what some people have pointed to is that because they’re using distributed ledger technology and they’re calling it a cryptocurrency, that could have a positive effect on the industry.” Greenspan also credited a jump in the price of Ethereum to the announcement.

Indeed, the cryptocurrency markets could continue to benefit if other banks and financial institutions follow JP Morgan’s lead–and many experts believe that they will. “Certainly, while it may be the first major US bank to create its own cryptocurrency, JP Morgan won’t be the last,” CloseCross’ Kadikar said.

“Central banks across the world could be moving to make their own crypto dollars and francs. The introduction, by a mainstream institution, of a stablecoin that is 100% collateralised is a welcome move.”

However, others see the potential of the JPM Coin differently. “The most likely impact of JPM coin is that the US government, or a consortium of global central banks or private banks will eventually form a unified blockchain based payment solution using digital fiat (USD or other currencies) that can be used to supplant the current SWIFT system,” said Dr. Edgar Radjabli, managing partner at Apis Capital Management.

“However, SWIFT has also realized the dangers its business model is facing, and might be considering opening up its system to smaller players such as fin-tech companies, small banks, et cetera.”

Regardless of what the impact will be, it’s clear that there is no going back now. JP Morgan has opened the pandora’s box of potential consequences that an institutional cryptocurrency may have on the world–now, we can only wait and see.