When the first “real” possibility of a Bitcoin ETF (exchange traded fund) first appeared on the scene, investors within and without the cryptosphere were abuzz with excitement.

It came in late July of 2018–Cameron and Tyler Winklevoss, twin-brother Bitcoin billionaires and founders of the Gemini exchange, had submitted an application for a Bitcoin ETF. While theirs wasn’t the first application, many analysts believed that it might be the first application to stand a fighting chance at getting approved.

For many of the same analysts, approval of a Bitcoin ETF also meant a major recovery in the price of Bitcoin. After all, institutional investors would leap at the opportunity to finally invest in cryptocurrency in a slightly more secure and regulated manner–right?

Denials, Delays, and Dilemmas: A Brief History of the SEC’s Bitcoin ETF Saga

The world never got a chance to find out. After a bull-run leading up to the SEC’s decision to deny the Winklevoss’ application, the price of BTC came crashing down. 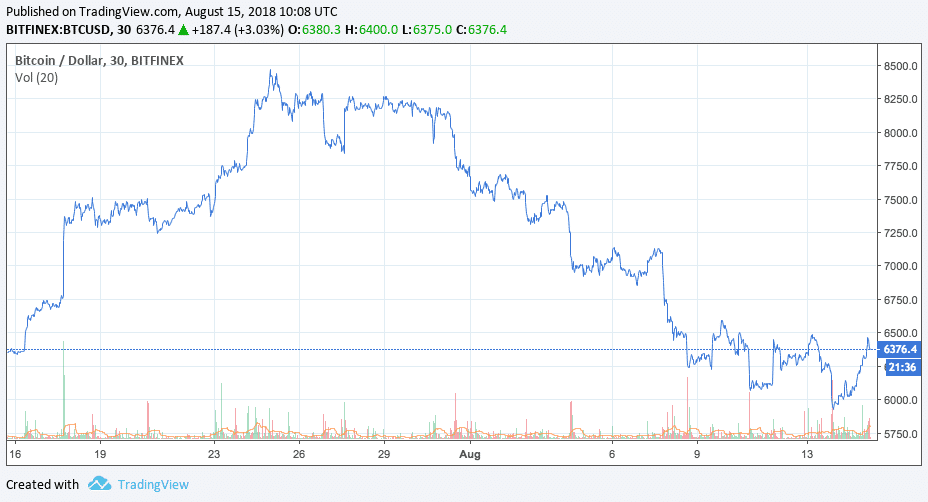 A number of firms have submitted applications for Bitcoin ETFs, but none has come any closer to success.

However, there is some evidence that the SEC’s attitude toward the possibility of a Bitcoin ETF. This is rooted in the fact that rather than deny many of these applications outright, the SEC has delayed its decision-making.

Investors’ interest seems to have waned as the SEC’s delays have continued to extend. After the SEC rejected the Winklevoss ETF, it was set to make a decision on a Bitcoin ETF application submitted by New York-based firms VanEck and SolidX in August.

However, the bull run that preceded the Winklevoss ETF decision was absent from the days and weeks leading to the VanEck/SolidX decision. Then, the SEC announced that it would be delaying the decision to September; when the delay was announced, it was barely felt in the markets.

The SEC continued to postpone its decision on a Bitcoin ETF further and further until finally a due date was set on the decision for several weeks from now–February 27th.

The US Government Shutdown Caused the Withdrawal of Cboe’s Application

However, the plot thickened on January 22ndwhen the Cboe BZX Exchange withdrew the application that would have allowed it to list shares of the VanEck and SolidX ETF.

No reason was given for the withdrawal at the time it was made. However, the next day, VanEck CEO Jan van Eck told CNBC that the shutdown of the US federal government was to blame. The shutdown caused a breakdown in communication between SEC staffers and the firms working to gain the Commission’s approval.

“So, you know the SEC is affected by the shutdown,” van Eck said to CNBC’s Bob Pisani. “We were engaged in discussions with the SEC about the bitcoin-related issues, custody, market manipulation, prices, and that had to stop.”

In the same conversation, van Eck explained that Cboe would be resubmitting the application when the government resumed its operations. “Instead of trying to slip through or something, we just had the application pulled and we will re-file and re-engage in the discussions when the SEC gets going again,” he said, simply.

And so it was. On January 30, a new filing was submitted to the SEC, announced by VanEck digital asset strategy lead Gabor Gurbacs. If this filing is approved, Cboe will be allowed to list shares of a Bitcoin ETF.

Jake Chervinsky, a lawyer with Kobre & Kim, told CoinDesk that “the ETF sponsors made the right decision to withdraw their proposal.”

“Withdrawing the proposal stops the SEC from issuing another order saying the bitcoin markets aren’t ready for an ETF,” he explained. “The decision to withdraw is a decision to ‘live to fight another day’ – Jan Van Eck has said he will re-file the proposal after the shutdown, so he probably wanted to avoid setting a new precedent that would make it harder to succeed in the future.”

Indeed, attorney Ethan Silver told CoinDesk that the withdrawal likely saved the possibility of Cboe’s application ever being approved. “If [the SEC] were forced to deal with [the proposal], they would sooner deny it than be put in a position [where it is approved on a technicality],” he explained.

However, the re-filing may mean many more months of delays on the decision to approve or deny the ETF. The new filing has not yet been published in the Federal Register, which means that an official timeline has not been set to receive a decision on the timeline. Once the filing is added to the Register, however, the SEC will have no more than 240 days in total to make a decision on the proposal; if it is added soon, a decision should be made around October of this year.

“We are actively working with regulators and major market participants to build appropriate market structure frameworks for a Bitcoin ETF and digital assets in general,” Gurbacs told Bitcoin Magazine in a February 1st report. “I am grateful for the overwhelming support around the world.”

How Would the Creation of a Bitcoin ETF Affect Cryptocurrency Markets?

Indeed, the global financial scene has shown quite a bit of support for a Bitcoin ETF. All the way back in September, the SEC said that it had already received 1400 letters of comment on the Cboe’s proposal, and was seeking more. 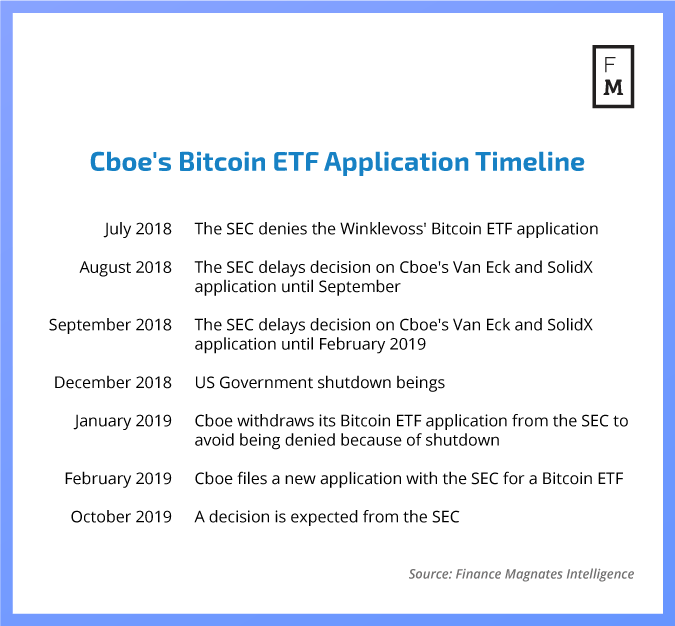 At the time, Gurbacs tweeted that the letters had shown overwhelming positivity: “I am humbled and impressed by the public support of the VanEck-SolidX initiative to bring to market a well-constructed, liquid, physical, insured Bitcoin ETF. 1400+ comments, 99%+ in favor. The public has spoken! Bitcoin is compatible with the U.S. and global capital markets,” although it’s unlikely that he knew exactly how many of the letters were favorable.

Even if support for a Bitcoin ETF is absolutely overwhelming, how will the creation of one affect the cryptocurrency markets?

“An SEC approved Bitcoin ETF would be a notable landmark for crypto, but the effects and monetary inflow likely will not be as profound as some would expect,” said Neutral co-founder and CEO Gordon Chen in an email to Finance Magnates. Neutral describes itself as a “blockchain-native financial instrument.”

Chen believes that changes in the Bitcoin ecosystem have made the need for an ETF less pressing. “Bitcoin itself is permissionless and recently has been becoming more easy to acquire. In addition, institutions can already get exposure to Bitcoin via CME/CBOE futures,” he said.

Therefore, it’s likely that the influx of institutional cash that BTC hodlers have been waiting for won’t happen if an ETF hits the markets: “the margin requirement for these futures instruments is upwards to 40%, reflecting the volatile sentiment of Bitcoin from the traditional financial industry. Thus it’s likely that institutional money isn’t going to be rushing into the ETF once gets approved, but just act would serve as another method for one to gain exposure to Bitcoin.”

“The hesitation doesn’t stop there since the actual backing or pricing of the ETF also lends itself to more questions and concerns, and likely there is no gold standard. What matters more for acceptance and adoption is to be aware of progress within the crypto industry along with contributing to where one sees most fruitful.”

Bohdan Kit, CEO & Co-founder of Kattana Crypto-Trading Terminal, believes that a Bitcoin ETF would not only fail to give the price and usage of Bitcoin a boost but that a Bitcoin ETF will “negatively affect the price of bitcoin and eventually the value of the whole cryptocurrency market in the long-term.”

Kit explained that “this has mainly to do with the increased regulation that would undermine the main purpose of Bitcoin as means of censorship-free value transfer.” In other words, the creation of a Bitcoin ETF would undermine Bitcoin’s unregulated nature, which Kit argues is the main factor driving its value forward.

Think about the financial incentives you would create with a #Bitcoin #ETF : short the ETF to your wealthy customers while you build a 51% attack against #BTC

“Fundamentally, in order for one Bitcoin to cost at least something, it must have an intrinsic value apart from a pure speculative interest,” Kit explained. “For now, this value comes from censorship-free transactions. Today, Bitcoin solves the drastic problem of private value transfers for those who could not perform them before due to government restrictions, political regimes etc.”

“Therefore, if Bitcoin gets regulated through the creation of an ETF – what eventually comes down to crypto-exchanges control, complete KYC procedures for traders and investors and much more – it will seize to serve its main purpose of censorship-free transfers of value. If this happens, Bitcoin will be just a form of electronic money based on the outdated technology which would make it lose its users and intrinsic value.”

What Will It Take for a Bitcoin ETF to Pass?

Indeed, the SEC has said time and time again that the unregulated nature of Bitcoin is the very reason that it cannot approve a Bitcoin ETF application. In an article for Finance Magnates last year, CEO of Solidus Labs Asaf Meir wrote that SEC Chair Jay Clayton explained that “for him and his agency to approve Bitcoin ETFs, they’d need to see key safeguards, the foremost of which are effective market surveillance to monitor and address manipulation and custody solutions.”

“Throughout the year, various firms applied for a Bitcoin ETF approval, and throughout the year, they’ve been rejected with surveillance and manipulation repeatedly cited as a major concern,” he wrote. “In the SEC’s rejection of Gemini’s application to sell investors a Bitcoin ETF product, a 90-page document, the word surveillance appears 135 times (often in the context of shared surveillance) and the word manipulation appears 132 times.”

Coinbase shitcoins OK for millions of retail investors. Bitcoin ETF for institutional investors too crazy. What f*ing parallel universe is this? ?‍♂️?

Therefore, Cboe understands that in order for an ETF to get approved, it must play the SEC’s game–or at least make it seem as if it is. The language in the filing reflects this: “as of now, no CCPs support the clearing of bitcoin Investors are left facing absolute counterparty risk. Such risks are often unacceptable to many investors.”

Will New Surveillance Tools Need to Be Developed and Implemented Before an Approval is Likely?

“An ETF provides a straightforward solution for investors seeking price exposure without facing counterparty risk, as the ETF would be cleared through DTCC. Furthermore, in creations and redemptions, the Trust always requires APs and trading counterparties to settle their leg of the trade before the Trust will do so.”

But is this enough? Meir doesn’t seem to think so. He believes that a new class of AI-based surveillance tools is necessary before the SEC will seriously consider approving an ETF. “Blockchain and its smart contracts, oracles, and distributed consensus mechanisms offer enormous value, but also add numerous new layers of complexity,” he wrote, “and more complexity means more opportunities for manipulation.”

Indeed, traditional KYC and AML surveillance methods just won’t cut it in the cryptosphere. “Rule-based surveillance systems are [only] good at responding to known threats,” he explained.

“In traditional markets that existed for over a century, this makes sense, as most threats are known. In the constantly evolving blockchain-based trading realm, however, there are plenty of unknown unknowns – what manipulation will look like in two, five, and ten years can be completely different from what we know in traditional trading and even from today’s digital asset trading.”

If this is indeed the case, a Bitcoin ETF probably isn’t in the cards for this year. But then again, it could be.

The new filing for the VanEck/SolidX Bitcoin ETF can be viewed below, courtesy of CoinDesk.