At the beginning of this year, things weren’t looking too good for the ICO sector.

Crashing Bitcoin prices and death-drops in the market caps of other cryptocurrencies had caused chaos across the industry. Companies were laying off employees en masse; miners were selling their equipment, and some crypto businesses were closing up shop entirely.

It almost goes without saying that the ICO industry was hit hard. The massive hype around ICO sales when crypto markets were worth over half a trillion turned into a deep depression. Token sales that drew crowds of eager investors in the past were suddenly struggling to reach their goals.

Earlier this month, a report by the research arm of cryptocurrency exchange BitMEX revealed that the ICO market was down 97 percent year-over-year. So far this year, a total of just $40 million been raised by ICOs; last May, that figure was over $4.3 billion.

But change may be in the air.

Although a massive amount of funding had been raised through ICOs at this time last year, the prices of Bitcoin and other cryptocurrencies were still in the beginning stages of the long decline that would continue throughout the year.

Now, Bitcoin and other cryptocurrencies are on their way back up. At press time, BTC had just crossed the $8500 mark; analysts were predicting further gains. The total cryptocurrency market cap had increased from $130.5 billion three months ago to $266.8 billion on May 29th.

Success Rates Are Higher–But There Is Less Competition Than Before

By some accounts, the answer is “yes.”

Data collected and published by token rating platform ICObench showed that although the total amount of funds raised through ICOs has decreased (and the average amount that each ICO raises has also decreased), the success rate of the average ICO has begun to increase.

This increase in success seems to be coupled with other changes in the market–for one thing, the average number of new ICOs on the market has decreased significantly since the beginning of the year.

“The ICO market lessens and the number of [uncompleted] projects tends to decrease,” the report reads, the decrease in the number of ongoing projects suggesting that fewer new projects are entering into the market.

“#ICOs are making a comeback! The past year of R&D is really making a difference in the #crypto space. We’re seeing smart solutions and innovative platforms conquer blockchain’s biggest challenges. This is the beginning of a new era!”- ICOBox Head of International PR Dima Zaits… pic.twitter.com/RfC2LR8S1E

For another, the average quality (according to ICObench’s metrics) has gone up–85 percent of total funds raised throughout May went to projects rated 3.0 or higher out of 5.0, compared with just 68 percent in April; April’s average ratings were also higher than March’s, in this regard.

A Trend to Zero is “Healthy,” Says Fundstrat

From this data, one could gather that the general decrease in activity in the ICO market has, in a way, been good for the space.

The ICO sphere still has something of a reputation for being rife with fraud and insubstantial projects that don’t deserve investors money in the first place–swathes of ICOs have been conducted with the goal of raising tons of money to fund non-existent platforms, or to fund token projects that have hastily been grafted onto existing business models in lame attempts to stay edgy and innovative.

Indeed, last July, a report from Boston College revealed that while (at the time) more than 4000 ICO projects had raised a combined total of $12 billion to date, the majority of them failed within just four months of their sales’ closing dates. Only 44.2 percent of token-funded projects were active beyond the fifth month of their life cycles.

It is perhaps for these reasons that Fundstrat researcher Tom Lee, the trend toward zero that plagued the ICO space throughout 2018 and into 2019 was a “healthy” sign, and that the downward trend would pave the way for a “new beginning” of sorts.

“We believe 2019 is a year of repair, setting up for a strong recovery in crypto prices broadly in 2020,” Lee told CNBC in March. “Any improvements in supply/demand dynamics is positive for prices and hence, the slowdown in ICO funding is a net positive. Sentiment is also quite muted, which is positive.”

And if 2019 is indeed the year of repair, there is still quite a ways to go–just this month, sister blockchain startups JoyToken and RepuX seems to have pulled an exit scam worth a total of $8 million after completing two token sales worth $4.7 million and $3.3 million.

Indeed, there are problems with the ICO sphere that remain unsolved–even though most of the hype around ICOs has passed, a lack of regulation and a reliable source of information surrounding token sales allows bad actors to slip through the cracks.

For as many legal jurisdictions that have made efforts toward clamping down on fraudulent projects, there will always be another jurisdiction that allows malicious actors to set up shop and do their dirty work without any real consequences.

And while governments may attempt to block their residents from accessing ICO websites, there are always individuals who are willing to take the steps necessary to evade the sanctions. This can also cause problems for ICOs who are attempting to stay compliant with national and international laws.

As these problems in the ICO sphere remain unresolved, legitimate projects who need capital have increasingly begun seeking alternative methods of fundraising.

Indeed, an increasing number of projects who may have held ICOs in the past are now partaking in “Initial Exchange Offerings”–token sales that are hosted by exchanges.

As IEOs become more attractive to buyers and sellers alike, a growing number of exchanges are quickly building their own token launch platforms. Huobi launched and then re-launched FastTrack, its own token sale platform, all within the last three weeks.

Crypto companies have also increasingly turned to VC funds for cash since the ICO market has dwindled so severely. This has presented another, perhaps unexpected, set of benefits for companies: “for one thing, dealing with a dozen investors is far easier than a Telegram group that numbers tens of thousands,” wrote crypto analyst Jon Russell in an article for TechCrunch.

“Professional investors are more accustomed to giving a company money and letting it use it independently, but retail investors in the crypto space tend to be more demanding and unrealistic as they seek a quick return on their money.”

VCs may also be a more reliable source of capital because of their long-term approach–retail investors have a tendency to jump ship and seek greener pastures when token prices start to fall.

While it’s possible that the world’s regulators will not be able to move fast enough to create the systems necessary for quelling bad behavior in the ICO sphere before the ICO market goes completely kaput–and alternatives to ICOs are getting increasingly sexier–there are some members of the cryptosphere who argue that we shouldn’t throw the ICO market in the grave just yet. 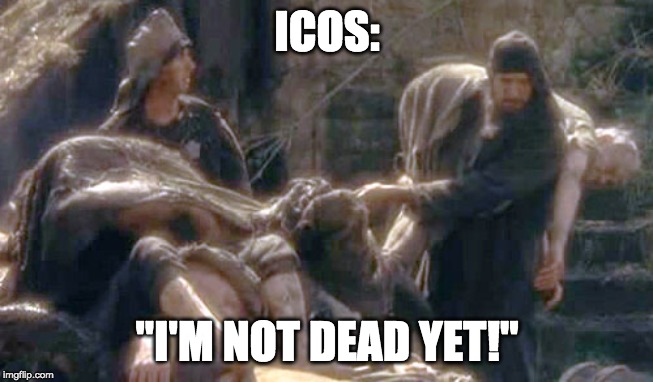 Indeed, crypto analyst FlatOutCrypto argued that the many problems with the ICO sphere have “obscured that the ICO is actually an amazing thing.”

“It took crowdfunding to a new level, smashing the records of platforms in existence for far longer and which lacked many of the barriers to entry that ICOs did,” the argument reads. After all, ICOs did bring in over $13.7 billion in funding during the first half of 2018 alone–“this is worth noting because it highlights the extent to which ICOs unlocked a latent desire for capital deployment.”

Still, the ICO sphere needs some work. “It’s in the interests of everyone if we can improve how ICOs are conducted,” the piece continued. “The globally distributed desire for investing they unlocked isn’t going to disappear. Instead, it will be redirected into other opportunities”–and there’s no guarantee that those “other opportunities” won’t also be prone to fraud.