The ICO market has changed significantly throughout the year 2018. While some of that ‘wild-west’ spirit certainly remains within the ICO space, the landscape looks quite different. On the surface, it seems that the ICO market has grown larger than ever According to data collected by CoinDesk, the average ICO size has nearly doubled from $15.98 million in 2017 to $31.08 million this year. 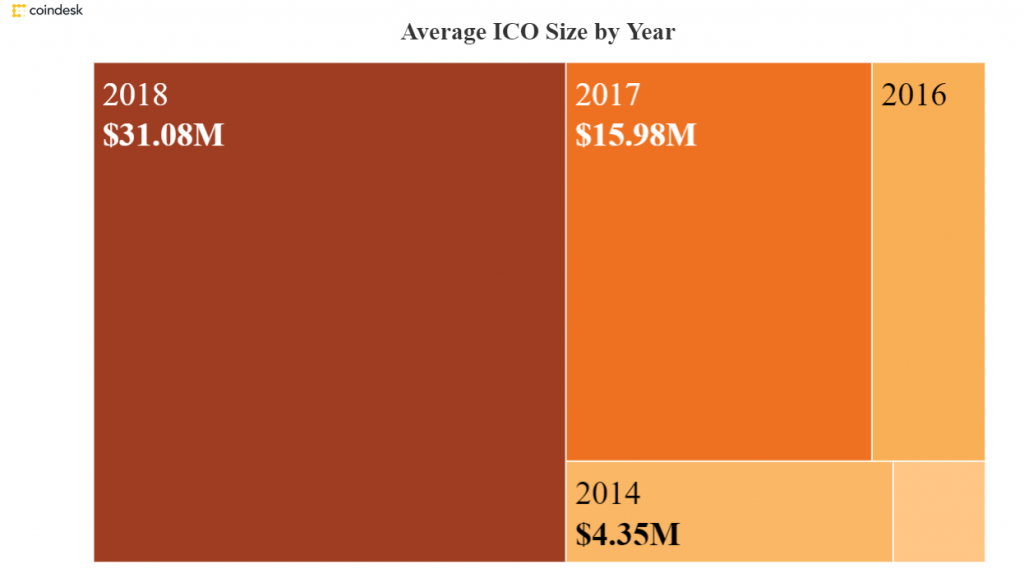 The most significant change in the ICO market is who is participating. In 2017, the ICO market was dominated by independent, mom-and-pop investors; the conversation centered around financially empowering individuals who would not have had the necessary capital to participate in IPOs or other kinds of investing.

Nowadays, however, “ICOs have become vehicles for accredited investors to make bets in the market for blockchain and cryptocurrency startups,” Investopedia reported. (In this context, ‘accredited’ should be read as ‘wealthy.’)

Indeed, a separate report from Bloomberg entitled “ICOs Are Turning Exclusive as Wealthy Investors Snatch Up Deals” revealed that a significant number of this year’s largest ICOs were only open to private investors. Telegram’s ICO raised $1.7 billion during its private round presale, an amount that ultimately prompted it to cancel the ICO’s public round.

Why are ICOs bending increasingly toward institutional investors? Bloomberg seems to think that the evidence points toward increased legal pressure. “As regulatory scrutiny intensifies, many startups are finding it simply easier to raise money from private investors, whose interest in digital assets has also grown,” the report read.

Regulatory and Law-Enforcement Actions Against ICOs Have Increased in Number

Regulatory scrutiny has indeed intensified. The number of cases in which the SEC and other government bodies have taken action against an ICO has certainly increased throughout this year and appears to be picking up speed.

Indeed, the North American Securities Administrators Association (NASAA) revealed in a report at the end of August that ‘Operation Cryptosweep,’ (a massive, coordinated effort to crack down on fraudulent and illicit practices within the cryptocurrency industry) has prompted the active investigation of more than 200 ICOs and crypto-related investment products.

The report said that since the operation’s launch in May of this year, at least 46 “enforcement actions” involving ICOs and crypto-related investment products had taken place.

There are even a few examples of ‘crypto crackdowns’ that may not be directly related to Operation Cryptosweep. One case took place in late August in Colorado, where securities commissioner Gerald Rome ordered three cryptocurrency companies (Bionic Coin, Global Pay Net, and CryptoARB) to show cause for promoting the sale of unregistered securities during their ICOs. The effort is part of the Colorado commissioner’s ICO task force, which was formed to quell the “trend of allegedly fraudulent companies looking to make quick money.”’

The US SEC also came down on a self-described ‘ICO Superstore‘ earlier this month, charging TokenLot LLC and its owners with acting as unregistered broker-dealers. The Michigan-based company “received orders from more than 6,100 retail investors and handled more than 200 different digital tokens, which the SEC found included securities,” according to an official statement from the Commission. The company’s owners were forced to pay roughly half of a million dollars in fines.

The Commission also went after a cryptocurrency hedge fund for the first time ever this month. Crypto Asset Management and its founder, Timothy Enneking, were fined $200,000.

Where Do We Stand Now?

If all of these crackdowns are taking place, surely the regulatory clarity that so many members of the industry have been calling for has been granted–right?

“The major takeaway is the regulatory treatment is (still) unclear for cryptocurrency,” wrote Virtual Currency Attorney Braden Perry in an email to Finance Magnates. “It seems as if every federal regulatory agency has chimed in on cryptocurrency, but none have taken the lead. The CFPB, SEC, and CFTC have all taken some action, but the legal space is still very confusing.”

A Growing Number of Government Officials Are Bending Towards Crypto

Some members of the US government understand this and are making an effort to include industry insiders in their work toward creating regulations–or at least preventing a regulatory crackdown so severe that it could cause permanent damage to the industry.

This week, representative Warren Davidson (R-Ohio) announced that he would be holding a roundtable on Tuesday, September 25th, to discuss cryptocurrency legislation. Attendees of the roundtable included representatives from VC firms, Wall Street, crypto industry insiders, and government regulators.

The discussion, entitled “Legislating Certainty for Cryptocurrencies,” is a precursor to a bill that Davidson is currently drafting regarding the formation of virtual currency laws. “Your input is critical to helping us preempt a heavy-handed regulatory approach that could stall innovation and kill the U.S. ICO market,” he wrote in a letter to attendees.

Initial Coin Offerings have the potential to make capital accessible to more people and companies: lowering barriers to entry, eliminating intermediaries, improving security, protecting privacy, and actually increasing transparency. The potential is for everyone, not just tech… https://t.co/Btr1ibWSaf

If Davidson’s efforts to lead the creation of cryptocurrency laws in the US are successful, the country could see a healthy set of regulations within the relatively near future. ConsenSys lawyer Pat Berarducci told NewsBTC that Davidson is one of many regulators who “[want] the U.S. to develop ‘do no harm’ policies to allow innovation [in the blockchain industry] to grow, just like they did in the internet era.”

Indeed, there are a growing number of government officials who have been increasingly vocal about the need and desire to form cryptocurrency regulations that are supportive of industry growth. SEC Commissioner Hester M. Peirce recently gave a speech at the Cato Institute’s FinTech Unbound Conference, during which she spoke of the importance of allowing cryptocurrencies to thrive without heavy interference from the SEC.

“What authority do we have to require that assets underlying securities be regulated as if they were securities?”, she asked. “Even if we had this authority, private markets can and do regulate themselves. The crypto community includes lots of people who are very willing to speak up, criticize one another, and bring to light technological, corporate governance, and other perceived weaknesses in cryptocurrencies.”’

SEC’s Division of Investment Management has a lot of questions related to crypto funds. I’m happy that there’s finally an online forum for people to respond: https://t.co/A78o4y1ulS

Earlier this week, Representative Tom Emmer (R-MN) introduced three crypto-friendly bills of his own, saying that “The United States should prioritize accelerating the development of blockchain technology, and create an environment that enables the American private sector to lead on innovation and further growth.”

Of course, there are voices in the government that speak out against cryptocurrency and aim for stricter regulations. In some states, these voices are the loudest. However, the trend seems to indicate that officials who are properly educated about blockchain technology and the cryptocurrency industry agree that it shouldn’t be regulated too harshly.

Indeed, when crypto regulations finally do appear on the scene, we can only hope that they are guided by knowledge and rationality.