Well, folks, it’s almost that time of year again. Q4 is drawing to a close, chestnuts are roasting on an open fire, and Bitcoin investors closely watching to see if Rudolph’s nose will flash red or green in the days leading up to the end of the year; after all, it could be time for a good ol’ Bitcoin Santa Rally.

A “Santa Rally” or “Santa Claus Rally”–which actually is not, in fact, unique to Bitcoin or even cryptocurrency–is when there is a sustained increase during the price of an asset throughout the last week of December and into the first two trading days in January.

What causes “Santa Rallies” to happen?

Investopedia explains that there are several possible explanations for this phenomenon. One theory points to sentimental causes–that holiday cheer and holiday bonuses result in an injection of new capital into the market.

A more practical theory explains that the cause is likely the fact that institutional investors–who tend to be pessimistic–go on vacation around this time of year, leaving the markets to retail investors (while the cat’s away, the mice will play.)

This phenomenon is well-documented outside of the crypto world. Over 65% of Decembers since the 1960s have resulted in positive gains for shareholders. However, within the cryptosphere, which is just over ten years old, the phenomenon has also been observed.

What’s in store for this year?

Last Monday, Bloomberg predicted that Bitcoin was approaching an “inflection point” as the price was continuing to fall toward the lower limit its Trading Envelope Indicator.

“The gauge smooths moving averages to map out higher and lower limits, with a break below the lower band potentially preceding a retreat similar to the one seen on Sept. 24, when the coin fell 12% in one day,” the article said. “A bounce off the lower limit, on the other hand, could signal support at that level and, possibly, a rally similar to the one seen on Oct. 25, when Bitcoin posted a 15% gain.” 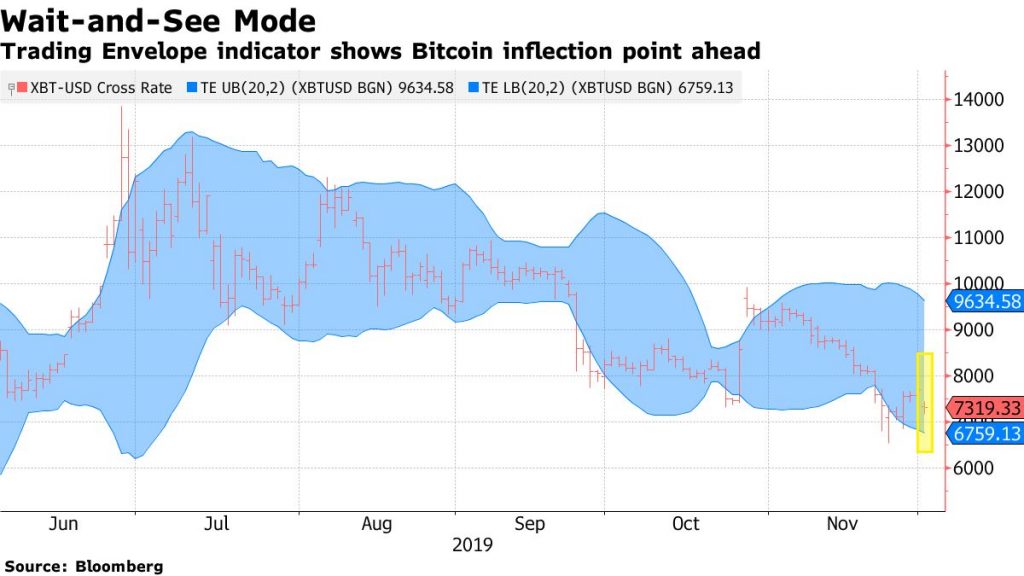 Since that piece was posted, the price of Bitcoin has risen from roughly $7,280 to approximately $7,500 at press time. But where could it go from here? 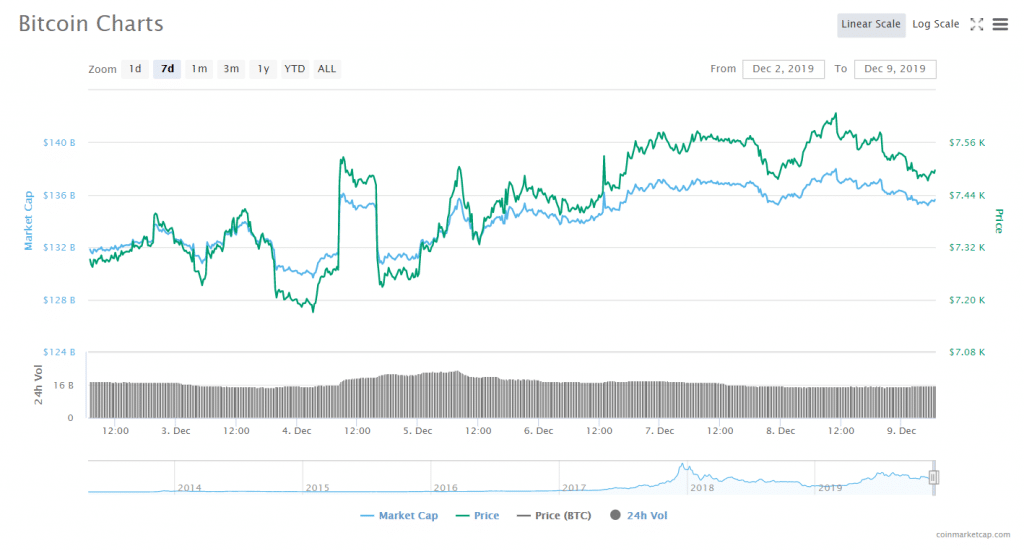 Cryptocurrency analyst Willy Woo Tweeted on Saturday, December 7, that he has observed a trend reversal toward a more bullish sentiment in the price of BTC. Specifically, Woo wrote that “on-chain momentum is crossing into bullish,” and pointed toward the upcoming “halvening.”

On-chain momentum is crossing into bullish. Prep for halvening front running here on in. Can’t say what this indicator is, as it’s proprietary to @AdaptiveFund, but it tracks investor momentum. The bottom is mostly likely in, anything lower will be just a wick in the macro view. pic.twitter.com/WqiPRpweUv

“Halvening,” or “halving,” is a term that refers to the instances when BTC mining rewards are cut in half. On the Bitcoin network, halving happens regularly at preset intervals of every 210,000 blocks. This is built into the Bitcoin protocol; the next halvening is scheduled for May 14.

I only tweet when I’m at high confidence, else it erodes my rep.

While there’s not a direct correlation between halvenings and the price of BTC, increases in BTC’s valuation have often followed.

The most popular theory behind these price increases seem to be that fewer mining rewards result in less cryptocurrency is being mined. The increased scarcity that results from the decrease in mining drives the price of that cryptocurrency up. Therefore, if miners have less incentive to keep doing their work, less coins will be mined, and the coins that are mined will be more valuable.

“The 1000 whales that control 50% of all bitcoin don’t care about on-chain [transactions].”

However, entrepreneur Charles Fuchs tweeted in response to Woo that on-chain transactions only tell a part of the story: “the 1000 whales that control 50% of all bitcoin don’t care about on-chain [transactions],” he wrote.

In other words, the massive amounts of cryptocurrency that are traded off of the Bitcoin blockchain often aren’t immediately reflected in the markets. Therefore, making observations and predictions of on-chain volume can only be effective to a certain extent.

However, according to cryptocurrency analyst Eric Thies, things aren’t looking up for Bitcoin. “$BTC is done for a while…short the corn,” he wrote on Twitter.

Yikes. I’m taking the hint this time guys.. $BTC is done for a while. This squashes some bullish sentiment i was feeling yesterday ….the purpose and reason I built this tool was to eliminate my emotion in analysis and it’s pretty clear I need to listen to it.

However, in response to a Tweet by @CredibleCrypto, Thies acknowledged that it’s possible that the sell signal will have disappeared by the end of the month.

Mitoshi Kaku, technical Analyst and Creator of The “Waves & Particles Trading System” at Ikagi, responded critically to this:

So you told everyone to short on a 1M candle signal, at the opening of the candle, even knowing that signal won’t be certain until the end of the month? Come on dude, you have a big following don’t mess with them like that! 🙄

But while a Santa Rally could yield some positive short-term results, what are experts saying about the long term?

Charles Hoskinson, co-founder of Ethereum and the creator of Cardano, seems unabashedly bullish about what’s in store for cryptocurrency. “ We will see 10k btc again and welcome 100k,” he wrote last week. “Crypto is unstoppable. Crypto is the future.”

Bitcoin’s price is going down? Remember everyone, after the FUD, news trading and manipulation clears out, we still have a global movement that’s going to change the world. We will see 10k btc again and welcome 100k. Crypto is unstoppable. Crypto is the future pic.twitter.com/9vlgH4S7u2

However, Tom Lee, Managing Partner and the Head of Research at Fundstrat Global Advisors, also seems to be fairly confident about the future.

“I think bitcoin’s weakness since July is understandable,” he said recently to CNBC. “I don’t think adoption has really grown since July and if you can’t grow adoption, network effects don’t take place and so bitcoin drifts lower. But does this change the 10-year, five-year, or even two-year outlook for bitcoin? I don’t think so.”

Lee noted that the increasing availability of institutional-grade investment products and services in crypto could bring new money into the space, and that China’s increased interest in blockchain technology could be good for the cryptocurrency ecosystem.

What are your thoughts about the year ahead for Bitcoin? Share them in the comments below.