The USA division of Greenpeace will be accepting Bitcoin for donations, thanks to its new partnership with BitPay.

The organization is the world’s largest environmental protection activist group, with 15,000 volunteers and employing 2400. Its 2011 annual budget was €236.9 million.

Greenpeace USA’s choice to go with BitPay, despite the equal availability of Coinbase’s services in the US, is notable. Said Ben Kroetz, Greenpeace USA Director of Online Strategy:

“As a completely independent organization, we do not take money from corporations or governments and rely primarily on individual donations. BitPay’s reputation as a trusted and secure third party bitcoin payment processor made it easy for us to begin accepting bitcoin thus opening us up to new markets and donors.”

Though the Bitcoin community comprises a diverse crowd from across the political spectrum, there exists a vocal contingent passionately opposed to corporations, US policy, war and other related issues. Their perspectives, to an extent, overlap with those of Greenpeace, whose Wikipedia page shows an image of a protest against Esso/ExxonMobil with an image of sign that reads: “Oil fuels war…Stop E$$O”. 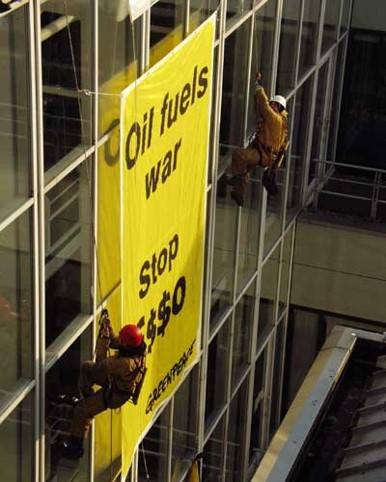 Bitcoin and the environment

Much has been written on the environmental impacts of Bitcoin mining, a highly energy intensive exercise necessary to support transactions on the network. There is also the issue of environmental waste and hazardous materials arising from the increasing obsolescence of mining equipment. The question is if Greenpeace’s support undermine’s its own principals.

Supporters may argue that the environmental footprint of the traditional financial system, in aggregate, is in fact larger. Or, the energy spent on donations will pay off in the form of environmental achievements elsewhere.