GAW Miners’ CEO Josh Garza cancelled his scheduled Q&A session at the North American Bitcoin Conference in Miami yesterday. The talk had been highly anticipated by skeptics, who accuse Garza of running a fabricated operation, and had hoped the session would clarify matters.

Shortly before the conference was set to begin, attendees received an emailed update from organizer Moe Levin saying that “Josh Garza will be attending, but not speaking.” This, despite an earlier tweet confirming that the session will move forward:

We are looking forward to Josh Garza’s Paybase Q&A session tomorrow. Details to follow. Download the TNABC app to stay up to date

Garza too tweeted that the session will take place, though the matter was no longer so simple:

Conference hall could not accommodate the open forum style Q&A we wanted. They are working on locating us a new venue. Still speaking

The exact reason for the cancellation is unknown. Garza, however, did attend, and was part of an 11:00 panel discussion on mining.

Meanwhile, he unveiled the latest addition to the GAW/Paycoin/Paybase family: PayFlash, which “allows for instant conversion of Paycoins to usable funds at the largest merchants in the world!” According to an information page, PayFlash lets you buy gift cards of leading retailers with paycoins. Retailers listed include: Amazon, Target, GAP, Best Buy and Home Depot. 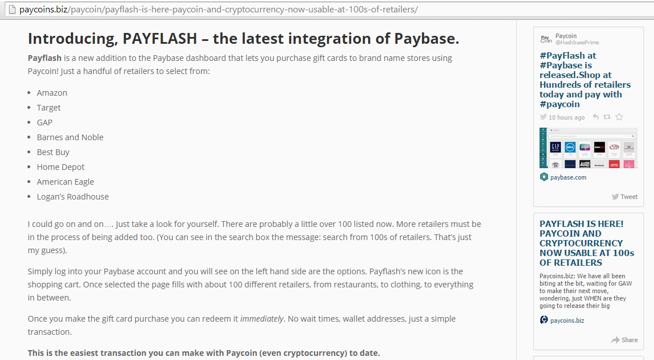 Recall that several of these were mentioned in earlier announcements of Paycoin’s acceptance among retailers. The latest move was likely designed to make good on these commitments, until now unfulfilled, in a similar manner to how bitcoin can be used to purchase gift cards from Amazon and elsewhere.