Photo: "What categories of investment do celebrities participate in?" (Source: Tide)
Share this article

Celebrity investors have, for a long time, played a rather interesting role in the cryptocurrency industry–and, more recently, in fintech.

This week, two important pieces of news related to celebrity investors hit the headlines: on the one hand, there was action movie star Steven Seagal, who was fined $314,000 by the United States Securities and Exchange Commission (SEC) for acting as a brand ambassador for a controversial coin offering held by a company known as “Bitcoiin2Gen”, or B2G. Seagal was also ordered not to promote any securities for three years.

On the other hand, Dreamers VC, a fund that was started by Hollywood actor Will Smith, along with soccer star Keisuke Honda, and NFL player J.J. Watt (among others), participated in a $15 million Series B funding round for Public, a commission-free investment app based in the US.

Both of these instances represent the latest points in the continuum that exists in relation to celebrities and investing: on one end of the spectrum, there are cases like Seagal’ s–celebrities who, knowingly or unknowingly, are paid to promote illegal securities offerings and end up running afoul of the law.

Though these celebrities may initially believe in the products they are promoting in these scenarios, in the end, nobody wins: the companies are disgraced, and the associated celebs have to pay fines and face possible public embarrassment.

How have these two trends developed? And how are they helping (or hurting) the industries that they support?

Unfortunately, cases like Steven Seagal’s are far from unique, particularly within the crypto space, and particularly in 2017.

Indeed, 2017 saw celebrity backings of cryptocurrency projects left and right: American boxing star Floyd Mayweather made his way into the crypto scene in July of 2017 with an endorsement of the Stox ICO: “I’m gonna make a $hit t$n of money on August 2nd on the Stox.com ICO,” he wrote on Instagram, alongside a photo of himself sitting with piles of cash. Mayweather also backed several other projects, including an ICO held by Centra Tech. 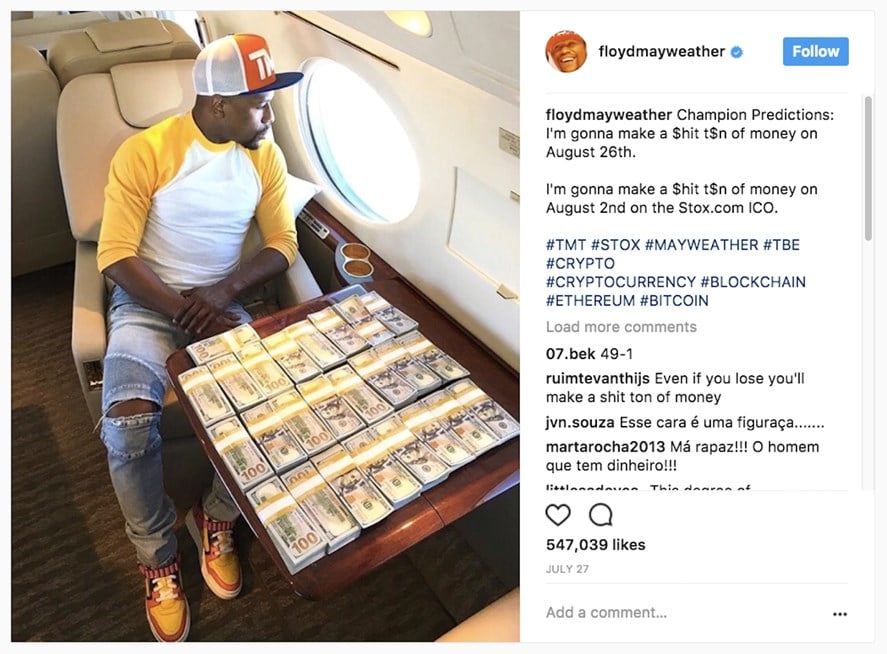 The list goes on–Miss America contestant Jessica VerSteeg, who founded Paragon, a blockchain-based supply chain company that was built to operate in the cannabis industry, enlisted American rapper ‘The Game’ to participate in the campaign’s promotion.

Argentinian football (or “soccer” if you’re American dear reader) star Lionel Messi was recruited as a brand ambassador for Sirin Labs, developer of the SOLARIN ultra-secure mobile phone, in December of 2017.

Even Paris Hilton, Hollywood socialite and co-star of The Simple Life—managed to find her way into the crypto space. In September 2017, Hilton began posting on social media to promote Lydian, a project that touted itself as the “first marketing cloud for blockchain.” 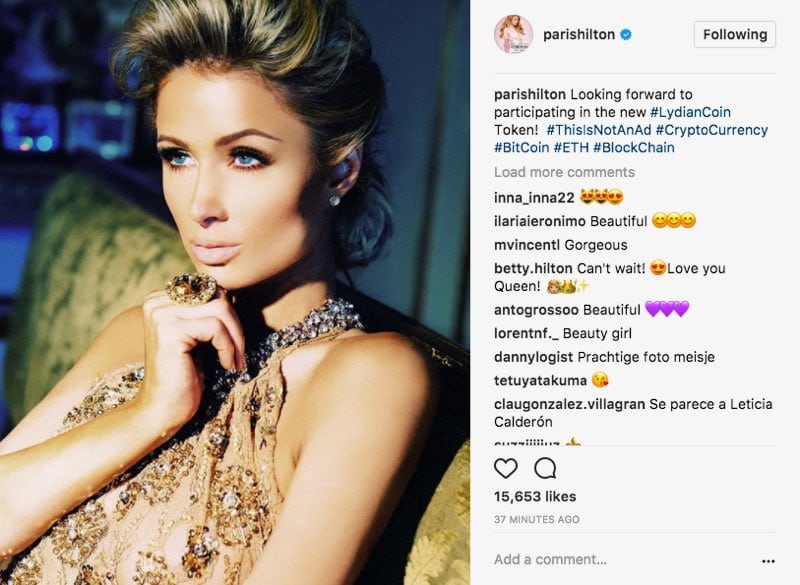 However, like the unfortunate conclusion to Steven Seagall’s crypto misadventure, none of these stories have happy endings.

Both Floyd Mayweather and DJ Khaled were fined by the United States SEC for their apparent failure to disclose that they were paid ambassadors of the Centra Tech ICO.

What’s more, CNBC reported in 2018 that the two founders of Centra Tech were charged with carrying out a fraudulent initial coin offering (ICO) by the US Securities and Exchange Commission (SEC).

Jessica VerSteeg’s company, Paragon, settled with the SEC, agreeing “to return funds to harmed investors, register the tokens as securities, file periodic reports with the Commission, and pay penalties.” There were also announcements regarding the class-action multi-million dollar lawsuit against The Game for helping market the ParagonCoins.

According to The Blast, The Game also found himself mired in legal trouble regarding his involvement in ParagonCoin: “[The Game was] roped into a multi-million dollar lawsuit over a cryptocurrency company that promised to revolutionize the cannabis industry, only to find out the company was allegedly blowing smoke about their intentions with marijuana,” the publication said.

And again, the list goes on: while Lionel Messi didn’t face any fines or legal troubles personally as a result of his involvement with Sirin Labs, he may have considered taking distance from the company after a series of unfortunate events.

Indeed, the company was forced to lay off 25 percent of its workforce in April 2019 when sales of its $999 blockchain smartphone didn’t meet the company’s expectations; at the time, the company’s blockchain-based tokens were reportedly trading at 99% below their peak value. The company’s founder, Moshe Hogeg, has also reportedly been the target of at least five lawsuits.

Paris Hilton also managed to extricate herself from the ICO she endorsed without finding herself in any legal trouble, but the endorsement of Lydian may have made a dent in her reputation. Hilton’s social media following quickly pointed out that Lydian’s founder, Gurbaksh Chahal, pleaded guilty to assault several years ago after police say he punched and kicked his girlfriend 117 times. Hilton deleted her social media posts related to Lydian shortly after the revelation.

“The credibility of public people inspires confidence in the consumer.”

As a result of this series of unfortunate events, it seems that the popularity of celebrity endorsements has slowly deteriorated in the cryptocurrency space, although there is some evidence to suggest that YouTubers and Instagram influencers–individuals who don’t have celebrity status, but may have close connections with large groups of followers–were the new weapons of choice for crypto companies looking to advertise their products (at least, for a time.)

However, J.R. Forsyth, founder of blockchain project Onfo, said that while celebrity endorsements may have a bad smell in the crypto industry in the short term, they haven’t necessarily lost their power in the longer-term sense.

“The credibility of public people inspires confidence in the consumer and their fame alone can be the reason for the success of the whole project,” Forsyth told Finance Magnates. “The only important thing is whether the project itself deserves such approval or it is solely due to financial incentives.”

But of course, there is an important difference between the cases listed above and cases like Will Smith’s VC choosing to invest in an app: “The Securities Commission (SEC) carefully examines cases when public figures encourage other people to invest or advertise crowdfunding campaigns,” Forsyth said.

Therefore, the SEC is unlikely to take an interest in Dreamer VC’s decision to support Public (which falls firmly under the “fintech” umbrella but doesn’t involve crypto at this time), even though, yes, he is a celebrity, and yes, his named was plastered all over financial sphere headlines this week in relation to the investment.

In fact, Will Smith hasn’t even publicly commented on Dreamer VC’s decision to invest in Public. However, hypothetically speaking, “if Will Smith says that Public is a good service and he invested in it but does not encourage other people to invest too and only offers them to try a new application, then the commission is unlikely to be interested in this,” Forsyth explained.

The “celebrity investment bug” is spreading

Still, celebrity investors can–perhaps unintentionally–bring the spotlight onto the companies they choose to put their money into.

“Today, the promotion of goods and services through influencers is a common practice, and investment rounds are no exception,” Forsyth told Finance Magnates. “Hollywood stars and world-class athletes have great financial opportunities and are an object to follow. If they trust their money to a particular company, then I can trust it too – this is how an average person thinks.”

And indeed, the film business seems to be so profitable these days that the bridge between Hollywood and Silicon Valley seems to be shorter than ever: Will Smith’s Dreamers VC is just one example of a growing number of Hollywood celebrities who have made the crossover into venture capitalist-land.

Indeed, Forbes reported that although Ashton Kutcher was “patient zero” of the “celebrity investing bug”, the trend had actually developed much sooner.

“Celebrities have acted as minority partners in brands, businesses, and startups for decades prior,” the article said.

But that doesn’t mean the trend hasn’t picked up speed: in addition to Kutcher, who took a risk on Uber and turned a $30 million fund into $250 million, Investopedia has also named Justin Timberlake, Kim Kardashian, and Lady Gaga as some of the world’s “top celebrity investors.”

Additionally, according to a study published by UK-based fintech firm “Tide”, celebrity investors have “participated in” $12 billion in startup investments since 2010, though, as the Wall Street Journal pointed out, “Tide’s head-spinning numbers conflate the value of funding rounds with the dollar value of celebrities’ own contributions.”

Interestingly, however, Tide’s findings did seem to suggest that software did seem to be the most popular investment category for celebrity investors: “the celebrities on our list have participated in over £4bn-worth of investments into software companies,” the firm reports, compared to £2.42 billion in e-commerce, £1.58 billion in retail, and so on (though Tide mentions that “the same investment may appear in more than one category.”)

But, if software is, indeed, the most popular category for this particular brand of celebrity investor, it’s likely that these investors are following the trends of the rest of the investment world, which has been heavily tech-focused for the last several years–and, more recently, on fintech.

Although it may initially appear as though there was a significant decrease in fintech funding from the prior year (which saw a sum of $40.8 billion in funding) when Ant Financial’s massive $14 billion round is excluded from 2018’s sum, there is actually a significant increase between the two years: without Ant Financial, funding rose from $26.8 billion to $34.5 billion year-over-year, an increase of nearly 30 percent.

This suggests that fintech is growing rapidly–and will likely continue to grow. Therefore, if celebrity investors haven’t already caught on, it’s possible that they will sometime soon; it’s also possible that some of these fintech investments could be directed toward crypto and blockchain companies.

As such, we may see the world of “celebrity investors” come full circle–though the ties between celebs and crypto haven’t been great in the past, a bright future could be blossoming ahead.