Photo: Boston skyline - the Federal Reserve building is on the left
Share this article

In an emergency announcement made on Sunday afternoon, the United States Federal Reserve has declared that it will be cutting interest rates to zero for the first time since the 2008 financial crisis. The move effectively cuts interest rates by 100 basis points following the Fed’s sudden decision to cut rates by 50 basis points less than two weeks ago. However, the Fed is not considering negative interest rates.

The central bank will also begin quantitative easing by buying at least $700 billion in assets, with plans to make $500 billion in Treasury purchases and at least $200 billion in agency mortgage-backed securities purchases “over [the] coming months.” The purchases have no weekly or monthly cap.

“The desk is going to go out and buy at a strong rate that we think will restore market function, liquidity, as quickly as it can be restored. That language is open-ended,” said Federal Reserve Chairman Jerome Powell.

The move appears to have had little effect on the economic cliff dive that markets have been making over the past several weeks. Following the announcement on Sunday afternoon, CNN reported that US stock futures fell another 5%, eventually hitting the “limit down,” meaning that they cannot fall any further.

At the same time, both the Dow (INDU) and Nasdaq (COMP) futures plunged 1,041 points (roughly 4.5%), while the S&P500 futures fell (4.8%). All three indexes fell into a bear market last week after shedding more than 20% from their recent peaks.

The price of Bitcoin briefly spiked roughly 10% following the announcement before continuing to trade sideways around $5,200. 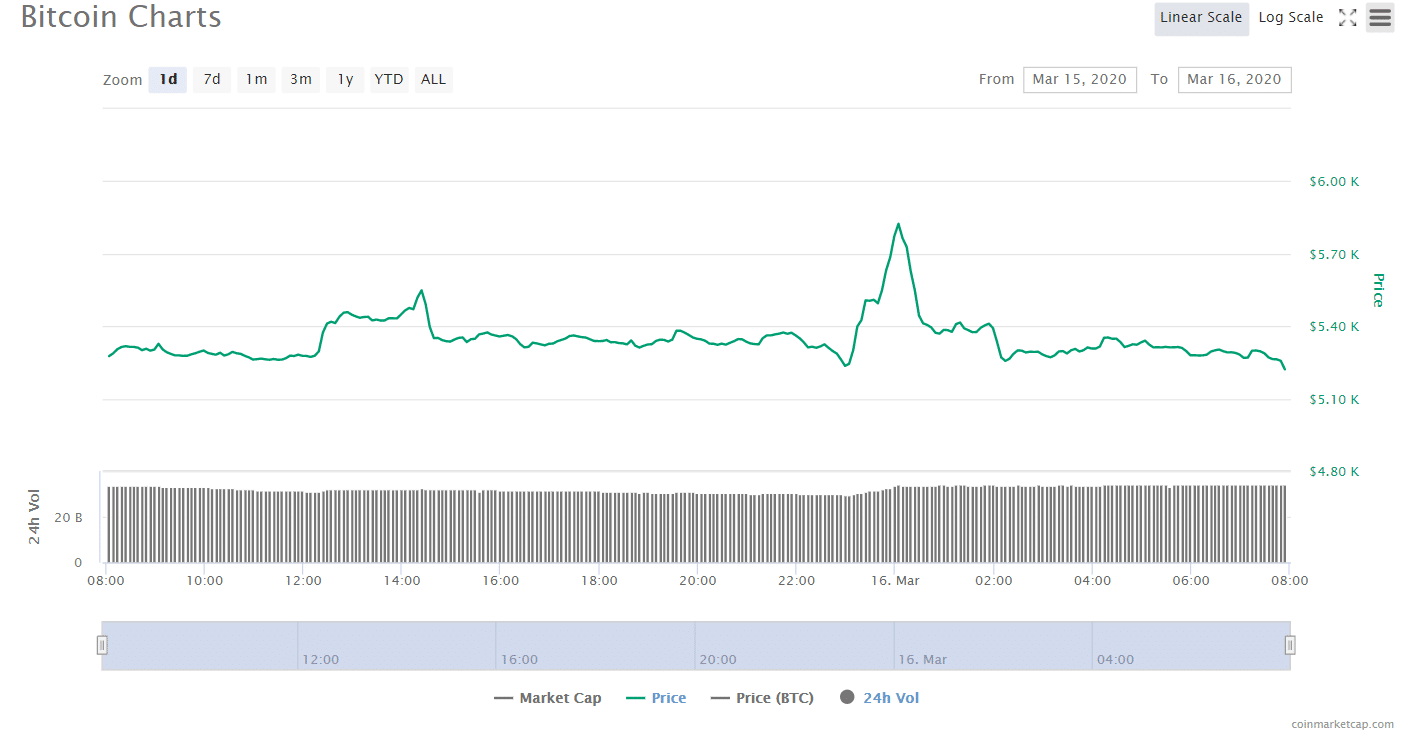 The cuts will “matter a lot more when the economy begins to recover.”

According to Chairman Powell, the Fed will keep rates at the new level “until it is confident that the economy has weathered recent events and is on track” to achieving strong employment and stable prices.

The Fed’s decisions are part of an effort to use its “full range of tools” to combat the impact of the coronavirus on the economy.

Chairman Powell stated several times during a press conference on Sunday night that the Fed’s actions are intended to encourage banks to support businesses as quarantines around the country continue to fuel concerns that layoffs and temporary shutdowns may be imminent.

“[Lowering rats to zero] will matter to borrowers who will get some relief from our cuts, but they’ll matter a lot more when the economy begins to recover,” Chairman Powell said.

“The actions we have announced today will help American families and businesses, and indeed, our entire economy weather this difficult period and will foster a more vigorous return to normal once the disruptions from the coronavirus abate.”

Chairman Powell also said that although the United States’ economy appeared to be on “strong footing” before the outbreak of the coronavirus, the impact on travel, leisure, and hospitality sectors are likely an indication that economic growth in “the second quarter is probably going to be weak.”

Powell also said that while he expected a “significant economic effect” from the virus in the short-term, the virus’s long term effects on the economy are “unknowable.”

However, some analysts are concerned that the timing of the decision was off. Anthony Pompliano, a partner at Morgan Creek, wrote on Twitter that “Fed Chairman Jerome Powell was just asked if he would consider negative interest rates. He said they do not see negative interest rates as appropriate policy here in the United States. Either they won’t cut again or he will have to change his mind.”

He said they do not see negative interest rates as appropriate policy here in the United States.

Either they won't cut again or he will have to change his mind.

United States President Donald Trump has intensely criticized Chairman Powell in relation to the time he took to make the decision to cut rates, which Trump thinks was far too long. On Saturday, Trump alleged that he had the power to remove Powell from his position among a number of other threats against the Fed’s leader.

Trump just said he was "not happy with the Fed" and threatened to remove Fed Chair Jerome Powell.

Ethan Leib and I explained in @nytimes why the Constitution bars bad-faith removals, and why Congress has the power to protect key offices from bad-faith presidents: https://t.co/4pvzWb9UwA