The cryptocurrency landscape is filled with threats. Despite efforts from governments and do-gooders within the industry, the space is still filled with people that seek to take your money at every turn. One of the most common kinds of traps that populate the cryptosphere are so-called ‘pump and dump’ schemes.

Sound familiar? Perhaps it should–pump and dump schemes have been around since long before cryptocurrencies even existed. The difference is this: at the moment, cryptocurrencies are particularly vulnerable to this kind of fraudulent activity.

Pump and Dumps Are Older than Crypto

“Pump and dump schemes have been around for 100s of years,” said L. Burke Files, President of Financial Examinations and Evaluations, Inc., in an exclusive email to Finance Magnates. “They were a driving force behind the inflated stock market of the late 1920 and continue to this day in every corner of the world in almost anything that is tradable.”

The largest pump and dump in recent memory happened in 2001 when employees of Enron were found to have artificially inflated the company’s stock price. Company executives earned over a billion dollars before Enron declared bankruptcy. While Kenneth Lay (the company’s founder) died before he could be sentenced, his colleagues faced millions of dollars in fines and jail time.

There have even been some accusations that major players within the cryptosphere have participated in pump-and-dump schemes. Members of the crypto community began pointing their fingers at Roger Ver and other Bitcoin Cash promoters in mid-November of 2017 when BCH shot from around $600 to nearly $2500, and then crashed to nearly $1000 over the course of a single week. 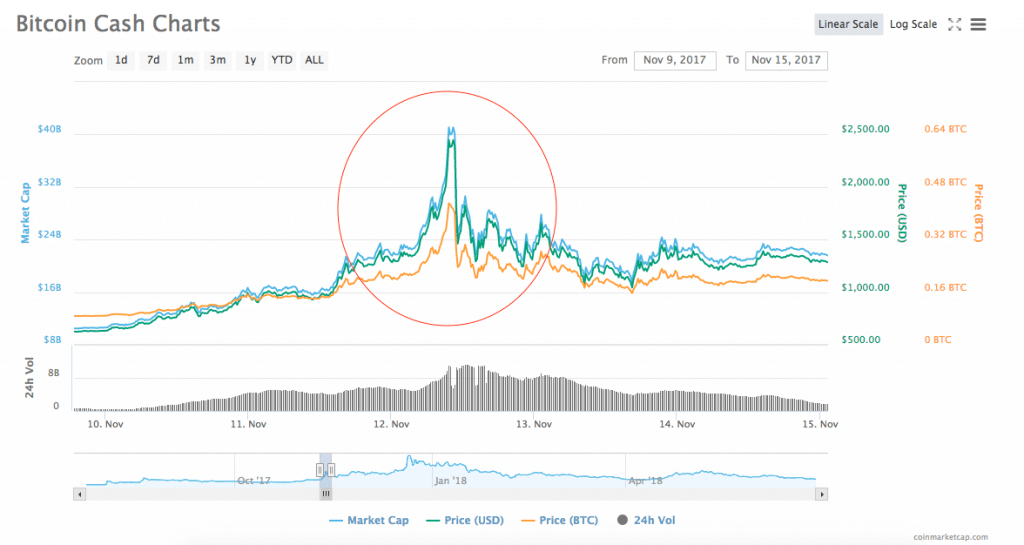 How Does a Pump-and-Dump Scheme Work?

A pump-and-dump scheme happens when a group of investors coordinate a massive buy and sell off a particularly cryptocurrency on a particular exchange. The main organizers will use encrypted messaging apps like Telegram or Whatsapp to announce a cryptocurrency, an exchange, and a time, and everyone swarms to buy at once. It seems that most of the participants in these schemes are small-scale hodlers, but Blockconomi reported that so-called ‘whales’ may aid some of the groups to really drive prices sky-high.

For ideal results, the coin should have a low trading volume, and the exchange should be small. This allows participants in the scheme to lock up the coin’s liquidity–and thus, dictate its price–more easily.

At the same time, participants are asked to ‘shill’ the chosen cryptocurrency on social media networks. This means that they promote the coin on platforms like Reddit, Facebook, BitCoinTalk, Twitter–you get the picture. They post messages saying that their coin of choice is “going to the moon” (et cetera) to catch the attention of unsuspecting investors.

These unsuspecting investors may then check out the cryptocurrency’s valuation charts and see that indeed, the coin is “going to the moon.” This triggers FOMO, or ‘fear of missing out’–Those without experience may not be able to see the scam for what it is and decide to buy into the cryptocurrency, hoping to ride the rise for a profit. The coin’s valuation goes up even further.

Once a target price has been reached, or a scheme’s organizers decide that they’ve had enough, they tell their so-called “players” to pull everything. All at once, the coin’s valuation dives into oblivion, and the unsuspecting investors who bought into the coin in the midst of the pump are left with nothing.

This practice isn’t just a bad thing for these investors–coins and exchanges whose networks have been targeted as grounds for pumps can have their reputations damaged as a result. For this reason, regulated exchanges have taken great pains to end the practice on their platforms.

In the world of stocks and other traditional assets, pump and dump schemes are highly illegal. Stock exchanges which are not taking adequate measures to prevent such schemes from happening can face legal penalties.

However, in most countries around the world, cryptocurrency exchanges don’t face the same kinds of regulations that exchanges for traditional assets do. The United States SEC issued a warning against crypto exchanges in March of this year: “many platforms refer to themselves as ‘exchanges,’ which can give the misimpression to investors that they are regulated or meet the regulatory standards of a national securities exchange,” the warning stated.

Inside a Pump and Dump

The thing about pump and dump schemes is that unlike other kinds of crypto scams, they require very little effort to be a part of. Holding fake ICO at least requires that a website be built; crypto malware doesn’t necessarily require technical skills, but chances are that you know how to access the deep web to get your hands on malware that will earn you some dirty money.

All that anyone needs to participate in a pump and dump scheme is a bit of Bitcoin and the ability to use it to buy other cryptocurrencies quickly.

The groups that organized these schemes are not hard to find. In fact, pump and dump schemes tend to be more successful as more people take part in them–therefore, anyone is welcome, and a simple google search will lead to dozens of options. As a legitimate trader, keeping an eye on the behavior of these groups and the coins they target can help prevent you from falling victim to one of their schemes.

According to a brief guide published by user ‘CryptoMandella’ on BitcoinTalk, the first step for wannabe participants to “make sure you register on the exchange and have BTC ready in your wallet. Keep in mind, it can take a while to transfer BTC.”

Once that’s done, participants wait for instructions from their pump group of choice. Then, “place your buy orders much higher (5x-10x) than the current price,” writes CryptoMandella. “This will ensure that your order is filled and you get it at the best price. If you set lower buy orders, someone else may clear sell walls before you and your order won’t go through.”

Finally, they sell–and profit… or, maybe not.

No Good Comes from No Good

It’s important to note that none of the groups organizing schemes give their participants the chance to speak publicly; threads are controlled entirely by group operators.

This prevents participants who may have experienced huge losses from coming forward. Indeed, it’s pretty easy to get burned as a participant in a pump and dump. If your timing is off by just a minute or two–or even just a few seconds–you could end up with a stack of worthless coins.

Indeed, CryptoBillionaire reported that the margin of profit for most pumpers who don’t get burned is rather low–somewhere between 5 and 20 percent (although a small number do make more.) However, most of the participants in a pump and dump end up selling their coins at a loss.

Unfortunately, pump and dump schemes are likely to continue as an unpleasantly regular part of the crypto landscape until governments can get their regulatory acts together. In a Business Insider report, fintech lawyer Ben Yates said that “the reality is that unless and until effective regulation is brought to bear, pump and dump cryptocurrency scammers will continue to get away with it.”