It was a record year for venture investment in the cryptocurrency industry, but 2015 might have been its peak for the foreseeable future.

According to Finance Magnates data, roughly $497 million was invested in cryptocurrency-related ventures in 2015. This is roughly $122 million more than 2014’s total, and half the approximately $1 billion invested in the industry to date. The figure beat our prediction calling for a drop in total dollars invested.

However, 2015’s total came on fewer deals than the year prior, including those of the 8-figure variety. The top two deals (Coinbase’s $75 million and 21 Inc’s $116 million), the likes of which we may not see again in the near future, comprise a whopping 38% of the 2015 total.

Indeed, investment seems to have peaked during the first quarter. It declined during each of the next three. August’s $10.4 million was the lowest monthly total in 16 months. We got a nice boost in September, but the next three months amounted to the lowest quarterly total ($30.5 million) in over two years. This was punctuated by a December of only three deals totaling $4.45 million. 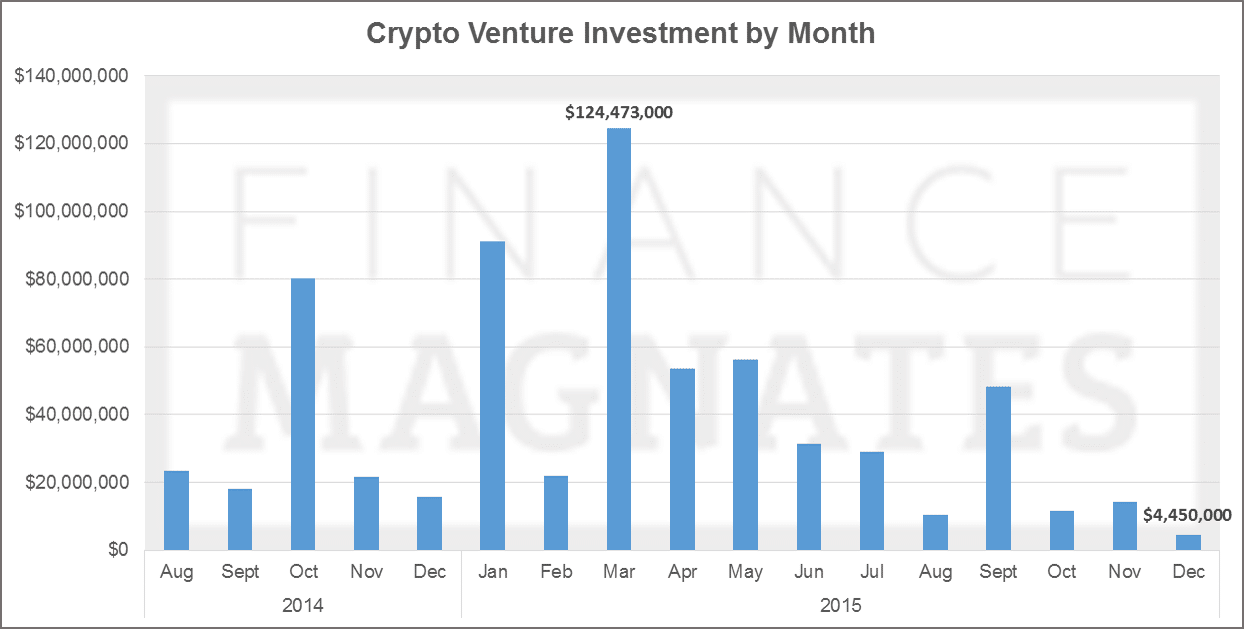 The coming year may be one of reckoning for technology startups in general. Many are believed to have been overvalued. Pundits have predicted an uptick in staff reductions and business failures for the coming year.

The downturn, if it happens, may be acutely felt by crypto startups whose investors were banking on bitcoin to proliferate with the masses. This doesn’t seem to be happening in the foreseeable future. Revenues for many bitcoin wallet providers are practically non-existent. Prudent investors considering additional investment are likely waiting first for that much needed breakthrough.

The silver lining is blockchain technology, which has taken over an increasing proportion of investment from startups engaged in bitcoin as a currency/asset. In the second half of 2015, investment in blockchain technology overtook that of bitcoin currency for the first time, winning 63% of the total, according to Finance Magnates data. Indeed, FinTech startups- including those engaged in the blockchain- are expected to escape the aforementioned startup downturn.

The next question becomes how many of the blockchain dollars will actually go into startups. Many of the financial institutions developing blockchain technology are doing so internally or as part of consortiums with other banks.