This year’s August once again exhibited the bitcoin price’s late summer fear of heights, which like in 2014, proved to be one of the harsher periods for traders. Unlike last year, however, the amount of investment into startups in the space has dropped to but a trickle, according to Finance Magnates’ data.

The month saw only 3 deals, bringing a total of $10.4 million- the lowest figures since April last year. It was the third straight month of declines. By comparison, last year’s August saw 8 deals totaling over $23 million (the figure excludes reported deals by now-defunct GAW Miners, which were either confirmed as fake or unverified). Thereafter, the money continued to pour in, with 13 deals totaling over $80 million in a record-breaking October. Earlier this year, Coinbase and 21 Inc set records for venture investment in the space, raising $75 million and $116 million respectively. 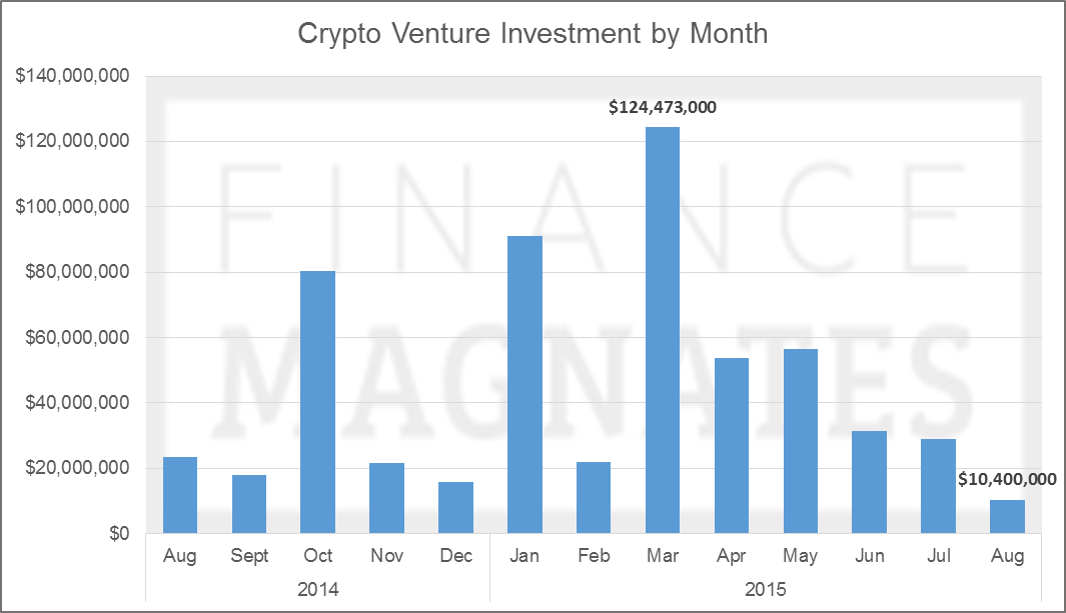 September thus far doesn’t look to be faring much better. Perhaps last month was more a matter of a summer slowdown, as any player integral to a deal- the startup, investor or venture capital firm- will keep it pending if away on vacation.

A single 8-figure deal will reverse the trend. But like with bitcoin prices, and all other traded assets, the establishment of a new low is both technically and fundamentally significant.

What remains to be seen is if investors are, frankly, beginning to give up on the sector- at least on bitcoin-as-a-currency, as opposed to blockchain technology. Or is the drop merely a pause, an integral part of a cycle whereby investors are looking to first see fruits of their capital?

Was peer pressure a factor in a good part of the funding? In a land freely flowing with innovation and money, were investors over-enamored by comparisons between Bitcoin and the early days of the internet, rushing their capital so as not to miss out on the opportunity of the century?

Hundreds of millions were invested into wallet services alone. Notable names include Xapo, Circle, BitPay, Blockchain and Coinbase. It is hard to fathom if and how these startups will generate a meaningful ROI when looking at their business models (although Coinbase Exchange, now one of the largest for USD trading, is likely generating a somewhat healthy stream from trading fees).

It should be pointed out that the apparent slowdown has been most pronounced when it comes to bitcoin as a currency. Investment in firms with significant engagement in blockchain technology has been steadily on the rise, now accounting for 42% of the total dollars invested in the space in 2015, according to Finance Magnates’ data.

William Mougayar, Toronto-based investor and startup mentor, agrees that there has been a marked shift toward blockchain technology, but “we aren’t done yet with the Bitcoin as a currency.” He has invested in crypto startups and founded Startup Management, which advises startups on strategy and marketing.

He told Finance Magnates that areas like Bitcoin for the transfer of money are still emerging and carry much potential. He believes that investment in the space has not necessarily peaked, and that several deals may be in the making but have yet to be announced due to seasonal factors.

He added that new investors are entering the scene. Significantly, private equity is starting to take notice. Larger deals, particularly in the blockchain-enabled financial services sector, are beginning to turn heads and catch the attention of large players not previously cognizant of the blockchain’s potential.

The coming months will likely be a good indicator of the level of investor interest and the areas where it is trending. Either way, investor attention will be caught at least one more time as the industry closes in on $1 billion in total investment to date.