As Canada moves to place regulations on virtual currency, California is trying to make it easier.

A California law, viewed by many as outdated, had prohibited commerce with anything other than U.S. currency. Reuters reports that Democratic Assemblyman Roger Dickinson authored a bill to repeal this law, which was approved by lawmakers yesterday. It now goes to Governor Jerry Brown for final approval.

Dickinson commented in a press release:

“This bill is intended to fine-tune current law to address Californians’ payment habits in the mobile and digital fields….In an era of evolving payment methods, from Amazon coins to Starbucks Stars, it is impractical to ignore the growing use of cash alternatives”

He also cited the popularity of Bitcoin as an alternative form of payment.

If the original law did indeed intend to prohibit all forms of alternative currency, it appears that it hasn’t been enforced- at least in regards to Bitcoin. According to bitcoincoop.org, nearly 300 merchants accept Bitcoin for payment in California.

The original law, Section 107 of the Corporations Code, states:

Dickinson’s measure, Bill AB-129, appears to have originally called for only an amendment to Section 107. It would specify that the original provision “does not prohibit a person from issuing or using an alternative currency that is redeemable for lawful money of the United States or that has value based on the value of lawful money of the United States.”

Technically, something would have still been prohibited, although it’s unclear what. It may have to do with treating such currencies as official legal tender, perhaps through restricting acceptance to such currencies only- a provision also mentioned in the original amendment: “This bill would also prohibit a person from being required to accept alternative currency.”

In the most recent version, the entire Section 107 was simply repealed. 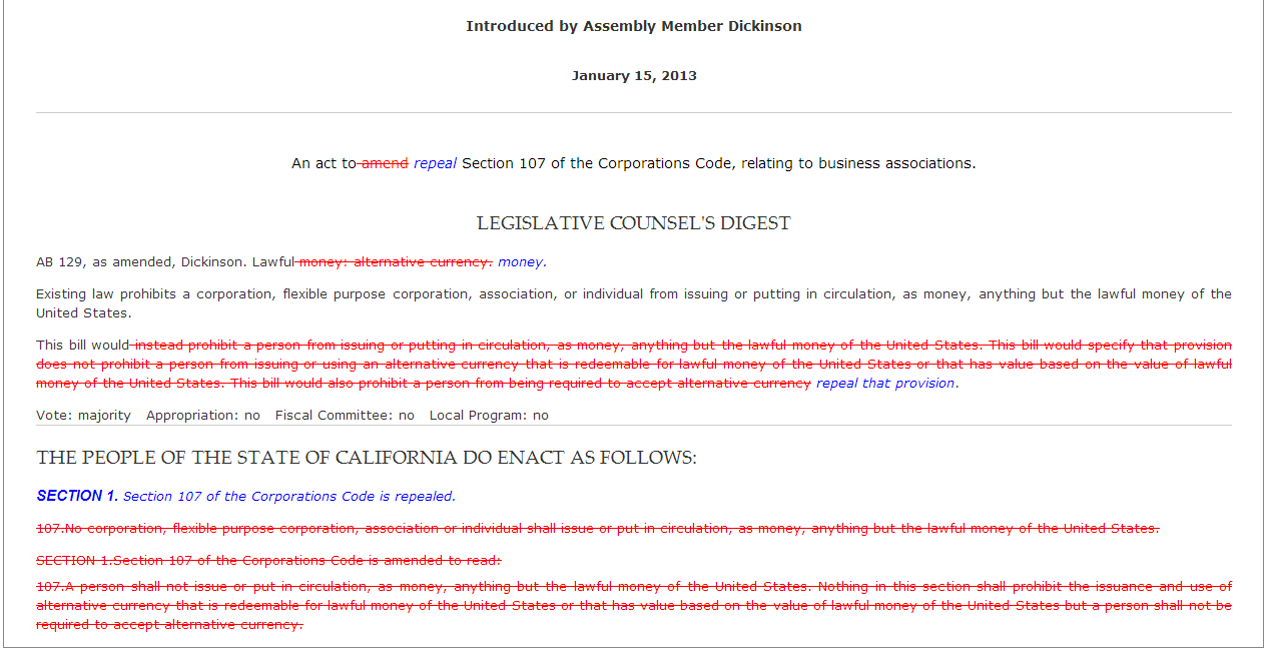 Share this article
Tags: california
Got a news tip? Let Us Know