An e-mail from someone you don’t know, followed by some events you didn’t expect to happen. It sounds like a classic hacking you hear about during one of those bitcoin thefts, like the one experienced by Bitcoins Reserve. Only this time it wasn’t bitcoins.

The founder of buttcoin.org, a satirical site that mocks Bitcoin, says that he was tricked by Butterfly Labs (BFL) into selling them his site. BFL then allegedly proceeded to flip some of the highly damaging negative commentary into praise.

BFL has come under heavy fire for its alleged failure to fulfill orders and process refunds. They are one of several mining equipment manufacturers to have faced legal action. When it comes to their shared disdain for Butterfly Labs, Bitcoiners and Buttcoin set aside their differences, with the latter providing a highly effective forum for complaints of BFL wrongdoing against the former.

Buttcoin.org’s founder, which goes by “borderpatrol” on reddit, says that he received an e-mail from a “Jeff” offering to buy the site for “$xx,xxx”. He considered this a good deal considering that the site earned practically no revenue and that he was looking invest less time on it. He did his checks to gauge the buyer’s sincerity, signed the contract and completed the sale. 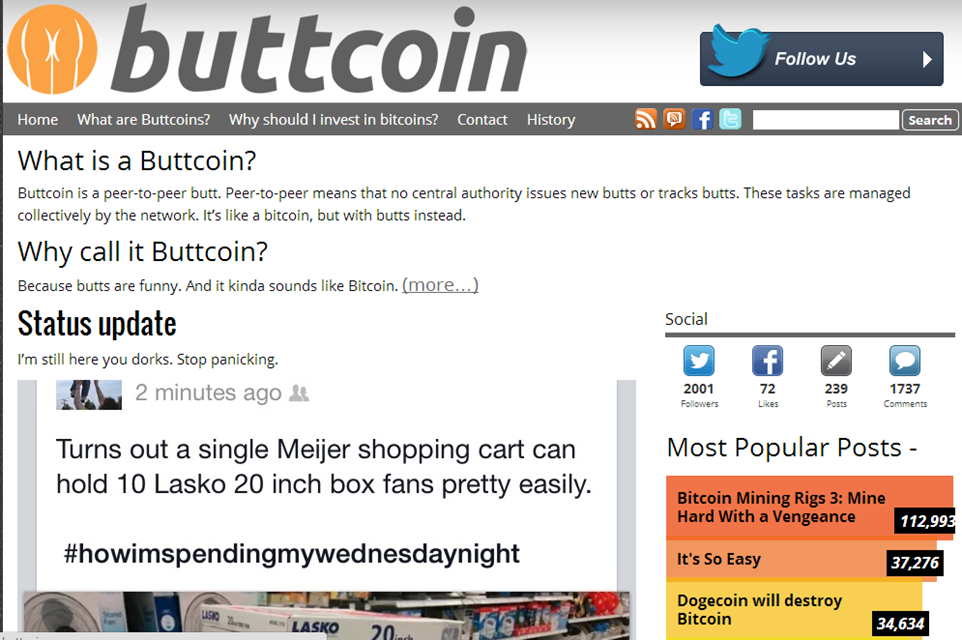 The buyer agreed to allow “borderpatrol” to stay on and continue to write for 6 months. However, on the day after the sale, he found his admin access to be locked out. Initially, he received no response from “Jeff” to his inquiries.

Jeff later replied that there was “going to be some changes to attract new advertisers.”

Borderpatrol did some investigation and provides a thorough summary of evidence claiming to link “Jeff” to Jeff  Ownby, BFL’s VP of Marketing.

The actual sale of the site took place 7 months ago, with the suspicious transformations of content observed more recently.

If true, the story reveals much about the amount BFL stands to lose with the continued bad publicity, considering that they were willing to shell out 5 figures up front.