The US Securities and Exchange Commission (SEC) has formally charged Josh Garza (Homero Joshua Garza) with fraud stemming from his operation of GAW Miners.

Garza allegedly perpetrated the fraud by falsely claiming to produce bitcoin hashing power that GAW did not own, “so most investors paid for a share of computing power that never existed,” according to the SEC.

“Garza and his companies cloaked their scheme in technological sophistication and jargon, but the fraud was simple at its core: they sold what they did not own, misrepresented what they were selling, and robbed one investor to pay another,” said Paul G. Levenson, Director of the SEC’s Boston Regional Office.

The SEC is seeking “permanent injunctive relief as well as the disgorgement of ill-gotten gains plus prejudgment interest and penalties,” without specifying amounts.

Previously unheard of in the crypto industry, GAW (“Geniuses at Work”) burst on to the crypto scene in the summer of 2014 by unveiling its low-priced “hashlet” miners. The offerings generated some complaints of scam-like behavior at the time, but not audibly more than other mining offerings.

Months later, GAW suddenly phased out its Hashlet program and instead introduced a new payments solution, PayBase, and cryptocurrency, PayCoin. The currency was guaranteed a $20 floor, but never held onto this value. In occasionally conflicting statements, Garza reiterated the guaranteed floor and launched the “Paycoin Honor Program”. Currently, each coin is worth $0.025.

In March, the supposed head of an operation called ZenMiner claimed that the reported $8 million merger with GAW “was a total lie.”

The whereabouts of Garza have been unknown since shortly before the entire scheme ceased in April.

Practically all of Garza’s (abundant) tweets (@gawceo) have been deleted. Anticipating this, Finance Magnates saved a few in January: 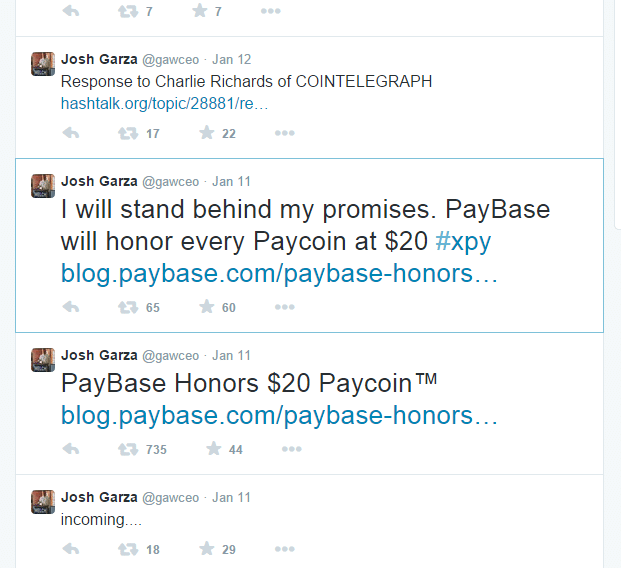 https://t.co/tw1X2jct6G. This article is FUD, don’t let the detrators stop you from buying XPY. Remember, Innovative makes a coining.

I plan to fork Paycoin back into my possession. Back to POW…I am the HashKing, this is my house!

(images have been saved just in case)

According a civil lawsuit filed in Hartford Superior Court in July, two U.S. residents claimed that GAW failed to deliver mining hardware they purchased and stole PayCoins from them. They also claimed damages for PayCoin’s reduced market value. GAW did not show up in court, and the pair were awarded a $205,000 pre-judgment remedy.

The SEC began investigating GAW in August and sued Josh Garza’s brother, Carlos Garza, who was reportedly not cooperating with the investigation. Around the same time, a court awarded default judgement against GAW over unpaid electricity bills for a Mississippi warehouse, used to house GAW’s supposedly massive mining operation.

Garza, who was around 30 when running the schemes, managed to pull off one of the craftiest series of frauds in cryptocurrency history.

Initially, the noise surrounding GAW’s operations would have classified them as “controversial”, which wouldn’t have been too bad for the mining industry at the time. Garza and team made appearances at Bitcoin conferences and openly addressed the media, giving some impression of running a legitimate operation, albeit a controversial one.

Lavish praise of GAW and PayCoin was prevalent on the GAW-run forum, HashTalk. The commentary even made its way over into other media channels as well. But as pointed out by vigilant Bitcoiners at the time, the commentary, whose authors cannot be verified, was produced by paid shills- or often Garza himself.

As of this time last year, GAW was still humming along and most commentators were uneasy calling out the operation as an outright scam.

Wall Street Journal even ran an upbeat story on the pending launch of PayBase and PayCoin, highlighting the virtues of the programs without even questioning them. Indeed, WSJ ran a follow-up piece a few days later that highlighted the controversy, motivated partly by a slew of angry comments posted in response to the initial article.

During GAW’s operation, Garza made claims that really stretched one’s imagination. But Garza invested heavily in painting a picture of legitimacy, so the net image that resulted was one of controversy. Overall, the saga was a painful one for the crypto industry, which will now hopefully emerge stronger.