The idea that Bitcoin may be “headed to zero” is one that flares up occasionally in the media. At this point, the crypto community sees this kind of doomsday speak as par for the course–it usually appears after being uttered by Wall Street analysts, Bitcoin skeptics, or industry insiders who have lost hope (or have their sights set on other coins.)

Once the words have been spoken, they appear in headlines across various financial and cryptocurrency-oriented news sources; they are echoed by other analysts and reporters alike.

Unfortunately, the idea that Bitcoin is going to crash into the ground then spreads into the minds of Bitcoin holders, some of whom may panic and sell their BTC before they see have the chance to see the value of their assets vanish into thin air. And if Bitcoin has been in the midst of a bear market (like it is right now), the message is particularly potent.

But could Bitcoin ever actually reach zero? And what might be the motivations for saying that it could?

”But BTC Has Lost Almost All of its Value! Right?”

The most common argument for Bitcoin headed to zero comes from individuals who claim to see “the writing on the wall.” And indeed, Bitcoin has been nose-diving for months–BTC has lost over 70 percent of its value since its all-time high of roughly $20,000 in late 2017.

Tales From Crypt-Apocalypse: Bitcoin has lost 70% from the peak; Ethereum 85%; other Top 10 crypto-currencies about 90%; the remaining crypto-zombie-currencies between 95% & 99% of their value. It is a bloody massacre that will continue as almost all of them are worth ZERO!

He’s definitely not wrong about the blood bath–in addition to Bitcoin, most altcoins have lost shocking amounts of value.

However, BTC has recovered from similar circumstances in the past–more than once. “In 2013, for example, Bitcoin experienced an 83 percent correction from its all-time high achieved in 2012,” wrote Hong-Kong based finance journalist Joseph Young for CryptoSlate.

Yet, Roubini is only one of many who continue to claim that BTC is headed into oblivion.

One of the other most recent rounds of “Bitcoin to zero” happened this December, when former Bitcoin Cash evangelist and CoinGeek founder Calvin Ayre said that Bitcoin would plunge into nothingness.

Ayre belongs to a school of Bitcoin skeptics that have chosen to jump the Bitcoin ship in favor of one of two Bitcoin-borne altcoins: Bitcoin Cash and Bitcoin SV (“Satoshi’s Vision”),. Members of the communities around both of these currencies see valid problems with the Bitcoin network–namely, poor scaling capabilities and a lack of utility.

Ayre claimed that BTC was headed to zero because people would “see the light” and switch en masse to Bitcoin SV, which was formed in late November 2018 as the result of an ideological split in the Bitcoin Cash community.

“I am predicting it to go to zero value [in 2019], as it has no utility,” Ayre told Express UK. “It does not do anything, and [Bitcoin developers] intentionally are anti-scaling.” Meanwhile, though, “Bitcoin SV [is] going to have an amazing year,” he promised.

Its clear that using real #Bitcoin #BSV has so many advantages why submit to jurisdiction by using the wrong token. Must read for gaming site teams:https://t.co/ZqIqmkFZIM

People like Ayre believe that the solution to Bitcoin’s problems is to scrap the coin entirely. They want to see Bitcoin burn, but not because of some kind of inherent dislike or skepticism around cryptocurrency as a whole. Rather, they want Bitcoin to be replaced by their altcoin of choice.

The ideological battles that have been waged by Bitcoin Cash and Bitcoin SV advocates have caused some rather iconic moments (and subsequent price dives) in crypto history. In mid-November of 2017, the price of Bitcoin Cash suddenly spiked as its advocates–Bitcoin Jesus-turned-Judas Roger Ver and Gavin Andresen among them–claimed that it was the “real” Bitcoin. However, a price rebound just hours later left new BCH investors with empty wallets.

The weekend has come to an end. Many Koreans that have bought BCH at $2400-$2500 have gone to beds with 40% – 50% of their investment value wiped out in less than 48 hours.. They will remember this weekend for a long long time …

Another of these iconic moments took place just over a year later when a highly publicized battle of egos and hash power was waged between advocates of Bitcoin Cash and Bitcoin SV, leading to devastating price crashes.

The point is that in the months following the creation of both of these cryptocurrencies, much of the crypto community has begun to view both Bitcoin SV and Bitcoin Cash as centralized grabs for money and attention.

In other words, many people believe that the advocates of these altcoins have a vested interest in Bitcoin going to zero because damage to the Bitcoin network could quite possibly result in increased usage (and higher valuations) for either Bitcoin Cash or Bitcoin SV. (Keep in mind that many of the high-powered advocates of these tokens may also hold large amounts of them.) 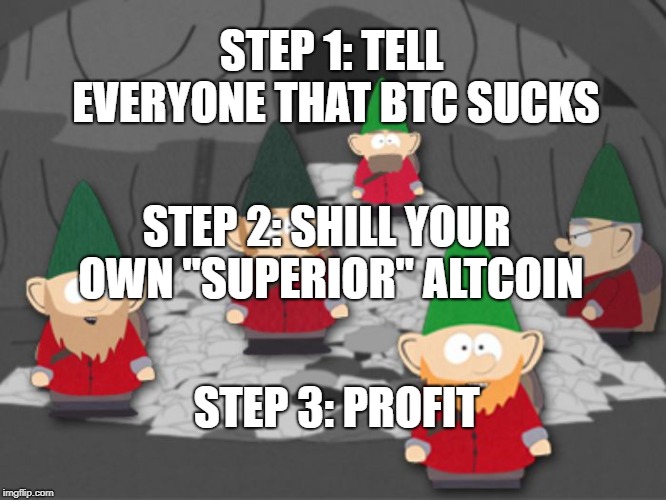 So, naturally, it makes sense for hardcore Bitcoin Cash and Bitcoin SV advocates to spread “FUD” (fear, uncertainty, and doubt) about Bitcoin–and each other, for that matter.

But these altcoin advocates aren’t the only ones who have grim predictions for the price of Bitcoin.

Bitcoin Isn’t “Based on Nothing”

“Bitcoin to zero” popped up again in January when Jeff Schumacher, founder of BCG Digital Ventures, spoke on a panel hosted by CNBC in Davos, Switzerland. “I do believe [Bitcoin] will go to zero. I think it’s a great technology but I don’t believe it’s a currency. It’s not based on anything,” he remarked.

However, “based on nothing” is a bit of a tough card to play when all currencies–fiat and crypto alike–are essentially based on nothing more than belief. Societies–local and global–believe that their currencies are valuable.

Of course, there are “proofs” for these beliefs–goods and services that people provide to one another on a local level, and the assets that national economies contribute to the global economy. Countries with greater influence over the global economy have currencies that are relatively more valuable.

Bitcoin Is Valuable Because People Choose to Use It

And there’s no shortage of countries whose currencies have completely lost their value. In fact, for some countries that have been stricken by serious hyperinflation, Bitcoin has proved to be a “safe-haven” of sorts for savings. For example, a number of families in Venezuela and Zimbabwe have turned to BTC and other cryptocurrencies to survive in the midst of financial crises.

The difference between Bitcoin and nationally-issued currencies is that Bitcoin gains its value because people choose to use it, not because of the value of the goods and services its creators can offer to the world. Every time someone buys into the Bitcoin network, the value of all Bitcoins increases–and the value fluctuations are based on a mathematical algorithm, not on the demand and supply of something like oil or weapons, for example.

“Bitcoin has the characteristics of money (durability, portability, fungibility, scarcity, divisibility, and recognizability) based on the properties of mathematics rather than relying on physical properties (like gold and silver) or trust in central authorities (like fiat currencies),” reads an explanation on Bitcoin gains its value from Bitcoin.org.

“In short, Bitcoin is backed by mathematics. With these attributes, all that is required for a form of money to hold value is trust and adoption. In the case of Bitcoin, this can be measured by its growing base of users, merchants, and startups.”

Of course, because Bitcoins are (at the moment) primarily acquired by being purchased with fiat money, a serious fiat collapse could have unknown implications for the ways that Bitcoin is valued. Additionally, concerns of centralization of the BTC mining industry could have an entirely different set of implications for the way that BTC is valued and used in the event of a global financial crisis. But that’s another story for another time.

So, really, the only way that Bitcoin could ever actually reach zero–absolute zero–is if absolutely everybody stopped using it, and everyone who ever owned Bitcoin sold their coins.

However, given the fact that blockchain analytics firm Chainalysis has found that between 2.78 and 3.79 BTC are permanently lost or otherwise inaccessible, Bitcoin can’t ever actually really reach zero again.

The Bitcoin algorithm was designed in such a way that a total of only 21 million BTC will ever exist; the lost coins represent up to 18 percent of the network that is permanently locked in. This number will only increase over time as more Bitcoins are lost due to faulty technology, death, or other unknown factors–that is unless someone figures out a way to retrieve them. 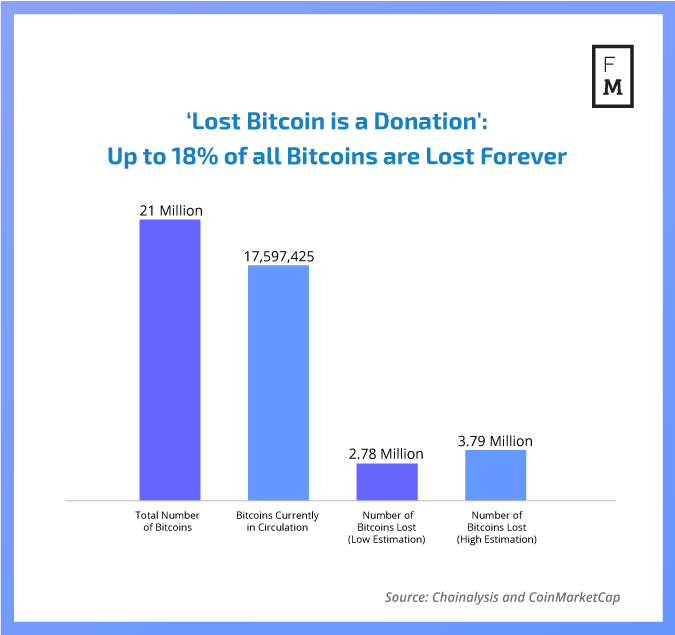 Even Bitcoin creator Satoshi Nakamoto acknowledged the fact that lost coins are a sort of blessing-in-disguise for the BTC network, though the tales of lost hard drives and deceased keepers-of-the-keys can be harrowing and heartbreaking. Before Nakamoto quietly disappeared from the internet forever, he or she wrote that “lost coins only make everyone else’s coins worth slightly more. Think of it as a donation to everyone.”

This isn’t to say that Bitcoin could one day be rendered totally obsolete–it can, and it most likely will, just as fiat currency is a technology that will also likely face obsolescence one day in the future.

But to claim that Bitcoin is headed to zero in the near future is to undermine the hedge funds, retail investors, families, companies, startups, deep-web entrepreneurs, and others that rely on BTC. Bitcoin has been declared “dead” more than 350 times. If those declarations are to be believed as true, BTC could be the single most resilient force on the planet.

Bitcoin is going to take off more than anyone can imagine. Emerging markets are going to be the reason it does. The overuse of sanctions and a large part of the world is sick and tired of the US and Europe dictating the world economy. People want total control over their economies. Bitcoin represents real freedom and democracy.