A new report published by Binance Research, the market analysis branch of the world’s largest cryptocurrency exchange by volume, alleges that less than seven percent of all cryptocurrencies are in possession of institutional investors.

How do you know when a market has bottomed out?@BinanceResearch shares its in-depth observations from investigating cryptoasset cycles.https://t.co/8lL9QlJhON

Retail Investors May Be Behind Correlations Between Bitcoin & Altcoin Prices

Once it was established that institutional capital represented such a small chunk of the cryptocurrency markets, Binance examined trends that are likely caused by the dominance of retail investors within the space.

According to the report, the “crypto market’s frequent periods of extreme correlation are inseparable from the market’s highly retail-driven participation.” 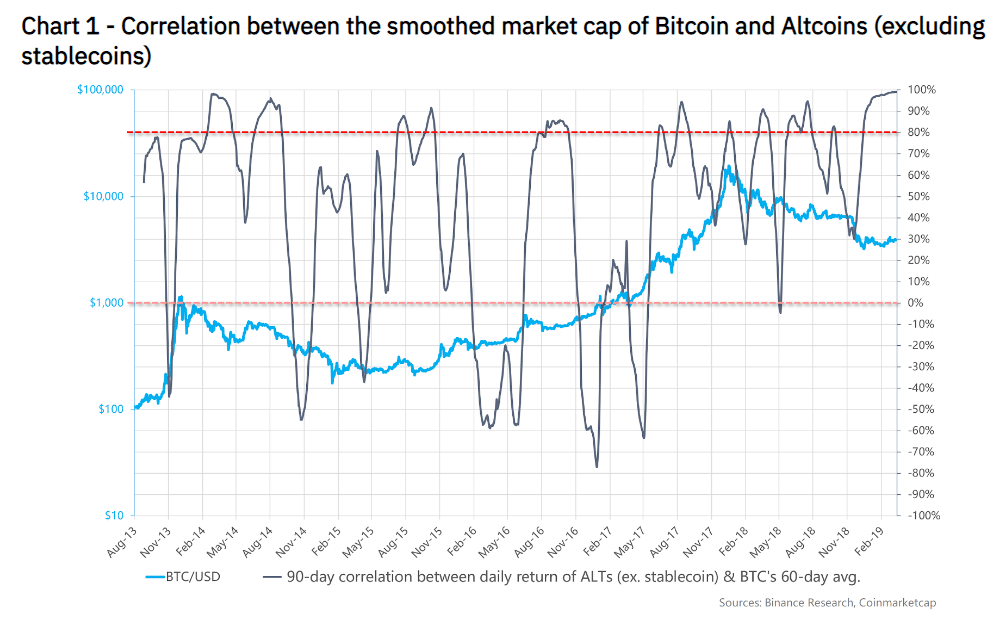 What does this mean? Binance found a correlation between growth in the price of Bitcoin and corrections in altcoin prices (and vice versa.) “Data shows that whenever correlations between [Bitcoin and altcoins] reach a specific positive upper bound of [0.8 to 1.0], the trend of Bitcoin against USD tends to reverse, or at least halts the previous price action.”

However, the report acknowledged that this correlative pattern shouldn’t be trusted as a foolproof strategy for price prediction. “Given the short history of the crypto market, it may be premature to say that there is a causal relationship between peaks in correlation and market reversals, or if it’s actually a herding effect during the market reversals themselves,” the report explained.

Time For a Change?

The longest period of “peak correlation” between Bitcoin and the altcoin markets ended recently, on March 14th of this year. The report explained that the end of this long period could indicate that a longer-term trend reversal may be on its way. In other words, Binance Research says that the crypto markets may have already found their bottom.

“Within this period, the composite altcoin correlation with Bitcoin also hit an all-time high (13 Mar 2018),” the report said. “That coincided with Bitcoin’s fall from the $6,000 range to the $3,000 range. This high correlation suggests that market sentiment has already found a local maximum during that period, and a trend reversal may possibly ensue.”