Following last month’s announcement of Synereo’s decentralized social media platform moving into alpha, the Israeli startup now discloses its underlying Technology Stack, enabling its social network to function without centralized servers – which are normally required for the processing of network activity and the storage of user information.

Starting from 2017, it will be possible to deploy fully operational applications on the system, without them having to be stored in a centralized location, effectively revolutionizing the way the internet works according to the developers. Until then, Synereo’s social network alpha will be deployed on the company’s decentralized test-network.

Synereo has also recently announced a grant project, inviting developers and entrepreneurs to develop decentralized applications for its platform, to foster the development of a decentralized ecosystem, competing with the current centralized paradigm.

Synereo’s Tech Stack is composed of 4 layers, built on top of each other. The first layer, called RChain, referred to as ‘Blockchain 2.0’, which the developers say constitutes a significant improvement on standard Blockchain technology, underlying cryptocurrencies like Bitcoin and Ethereum.

In contrast to these, Synereo’s RChain is a concurrent and sharded blockchain. ‘Sharded’ refers to the subdivision of the Blockchain into composable parts, which interlock to make a unified whole, but do not need to be computed all at once (as is the case with the Bitcoin Blockchain). Concurrent means that this subdivision enables different processes to run in parallel without interfering with each other.

Synereo boasts that as a result of this architecture, RChain solves a well known problem of classical Blockchains, troubling the entire industry for years, while enabling Blockchain based systems to be much faster, infinitely scalable and cheaper to maintain. 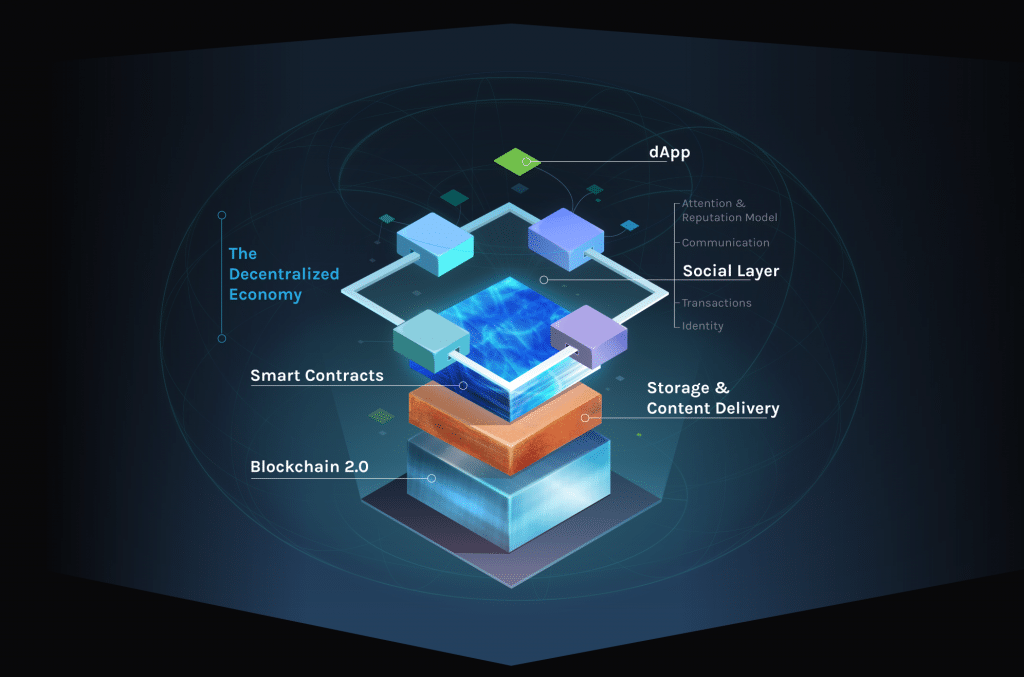 Synereo says that blockchain is not suited for the storage of heavy media data such as images, videos and text. For this purpose, Synereo’s CTO, Lucius Greg Meredith, developed a unique protocol to distribute this kind of information among Synereo nodes and then retrieve it on demand.

This protocol, SpecialK, has been under active development for over four years, representing an evolution of DHT-like distributed key-value databases. The company explains that SpecialK also provides a monadic domain-specific language, providing programmers with a familiar, unified API where they can access data distributed across the network. Data is distributed with both redundancy and sensitivity in mind, making sure it’s available where it’s needed, when it’s needed, and concealed when it’s not.

Rholang (Reflective, Higher-Order process Language) is RChain’s native smart-contract programming language, comparable to Ethereum’s Solidity. In contrast to Solidity, however, Rholang is a reflective programming language, based on process calculus, allowing for the parallel execution of processes and the composition of higher-ordered smart contracts on the basis of lower ones, in an efficient and secure way.

The developers say that this grants Rholang an advantage over traditional smart contract languages and blockchain scripts, and puts it in the same category with established programming languages. Java, C#, and Scala have all eventually adopted reflection as a core feature. This is what allows programmers to use programs to write other programs, on which more complex applications can be deployed, and so on. Without this feature, industrial scale development would likely be impossible due to complexity.

The architecture also allows for better safety tests and simulations, a property of utmost importance when it comes to publicly used decentralized applications. Synereo says that the infamous DAO hack, for example, could probably have been avoided if the DAO’s code had been based on Rholang.