It’s been a dour couple of months for the cryptocurrency industry. Since the market crashed midway through last November, the number of crypto enthusiasts shrieking about bitcoin reaching $50,000 by the end of the year has, thankfully in this author’s view, taken a precipitous decline.

Even those who had always taken a more measured approach to things seemed less certain. Attending several blockchain and cryptocurrency events in December of 2018, it was difficult to tell if the people saying “this was meant to happen” were reassuring themselves or talking to the audience.

Still, it’s not all doom and gloom in the magical, much-hyped world of blockchain. One man that’s still hopeful for the future is Edward Woodford. The CEO of institutional cryptocurrency exchange Seed CX, Woodford co-founded the firm, along with fellow MIT graduate Brian Liston, back in 2015.

From derivatives to digital assets

Initially focused on developing derivatives products, the company has since shifted its focus to building a digital asset exchange that will meet the high standards set by financial institutions’ trading rooms.

In the process, it has managed to obtain a plethora of different regulatory licenses. Alongside a pending broker-dealer license and New York BitLicense, the company has regulatory approval to operate a swap execution facility, act as an introducing broker, a money services business and, in more than twenty-eight US states, a money transmitter.

The Seed CX team is excited to announce its successful launch of spot trading for digital assets – we are the first US digital asset exchange built exclusively for the needs of institutions https://t.co/jM8NRRK3LU

Woodford’s firm had done two quickfire launches, a new cryptocurrency wallet and spot trading in a number of different digital assets, in the run-up to our discussion. But with the market tanking so dramatically at the end of 2018, are financial institutions even interested in these products?

“Institutional interest is still there but it’s changing,” said Woodford. “When prices were astronomically high, and returns easy to come by, people were willing to take on more operational risk because those returns were so abnormal. Now returns have normalised, taking on those operational risks doesn’t make sense. So we’ve seen a flight to quality amongst institutions and, for Seed CX, it’s been positive because we can provide the technology and services those institutions require.”

‘Institution’ is a word bandied about a lot in the retail trading world, but it’s often difficult to determine what a firm really means when they use the phrase. Many brokers, for example, will refer to professional investors as institutional investors when they are very clearly not the same thing. Taking that into account, I asked Woodford what mix of firms we can expect to see using Seed CX’s platform to trade digital assets.

“It’s all encompassing,” said Woodford. “We’re seeing asset managers and hedge funds entering into the space – and not just those that are focused solely on digital assets. We’re also speaking to major banks and interdealer brokers. There are a lot of companies expressing interest in trading digital assets but who want to operate under the radar. These are people that, a year ago, were very hesitant about getting involved.”

Those companies, who were fearful of getting involved, had every right to be worried. Massive hacks, a total lack of transparency on the part of exchanges and minimal regulatory support meant that, for most financial institutions, digital assets were not worth the hassle.

No proprietary trading at Seed CX

Twelve months later, Seed CX could ease many of those concerns and enable previously anxious companies to start trading. The exchange operator’s recently launched wallet, for example, makes it easy to track ownership of assets and should prevent any large-scale hacks. Spot trading is being offered in several different major currency pairs, something that any institutional firm will require. Finally, Seed CX is, according to Woodford, also being open about what it allows its workers to do.

“We are completely transparent about what our employees can do,” the Seed CX CEO said. “That may not sound like a big deal but other companies are just not doing that. If you look at a lot of [digital asset] exchanges, they are trading against their own customers. That’s not necessarily wrong, it’s just different, but we believe that institutions don’t want an exchange with a proprietary trading room.” 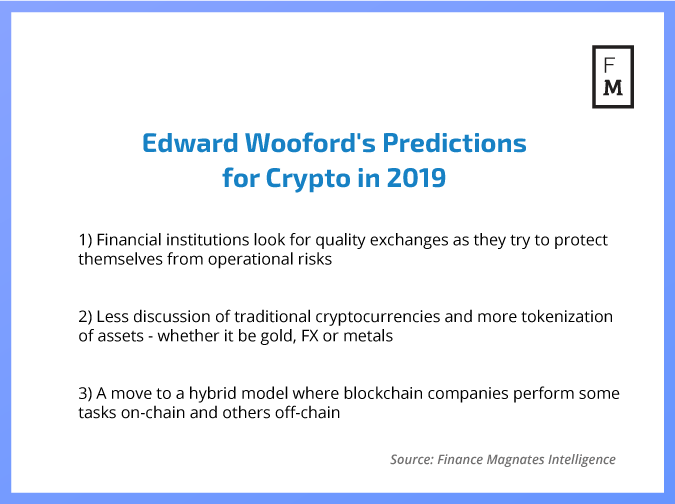 Other steps that the company has taken may not seem significant but, for financial institutions that want only the best of the best, they can make a major difference. For instance, the company will have dedicated phone support for each client. That’s something that, Woodford claims, no other exchange operator is providing to firms.

“What we’re trying to do, is to make the operational side of cryptocurrency trading boring,” said Woodford. “We don’t want people talking about hack risk, technological risk or the risk of the exchange trading against you. We want to create an environment where you can focus on trading digital assets because, ultimately, that’s what institutions come to us to do.”

But what assets will those be? Well, according to Woodford, bitcoin and similar cryptocurrencies are just the beginning. With a number of companies beginning to trade different assets over the blockchain, it may not just be the regular Litecoins and Ethereums that we see being traded on Seed CX’s platform in the future.

“People think that, if you aren’t bullish on one asset, you aren’t hopeful about the digital asset industry – that’s wrong,” said Woodford. “Even if you were to tokenise 1 percent of global assets, that would be a huge, huge market. So yes, Companies are definitely interested in trading bitcoin, litecoin, ethereum and so on. But those are just the tip of the iceberg. For instance, there’s been a lot of progress in the tokenisation of precious metals, FX and oil. That just goes to show that we’re at a nascent stage in this industry.”

A nascent industry and one that, if Woodford and co play their cards right, Seed CX could be at the helm of. He’ll just have to hope that all of those people saying that the recent crash was supposed to happen were right.