The New York Stock Exchange (NYSE) has announced the launch of its NYSE Bitcoin Index (NYXBT), which will debut today.

“Bitcoin values are quickly becoming a data point that our customers want to follow as they consider transacting, trading or investing with this emerging asset class. As a global index leader and administrator of ICE LIBOR, ICE Futures U.S. Dollar Index and many other notable benchmarks, we are pleased to bring transparency to this market. By combining our technology infrastructure with our expertise in index calculation and data management, we will continue to launch complimentary products based on our rigorous standards and proprietary index methodology.”

A press release described how NYXBT will use “unique methodology that relies on rules-based logic” to analyze transactions in order to verify the integrity of data. It will produce “an objective and fair daily value” of one bitcoin as of 16:00 London time, the same time the WM/Reuters benchmark rates for foreign exchange are fixed. Shortly thereafter, it will be published by the NYSE Global Index Feed (GIF) and made publicly available for an initial period on the NYSE index page.

The index is already being tracked on sites such as Google Finance, which currently indicates its value at $237.03, reflecting the value of bitcoin on Coinbase’s exchange as of 4 PM GMT yesterday. 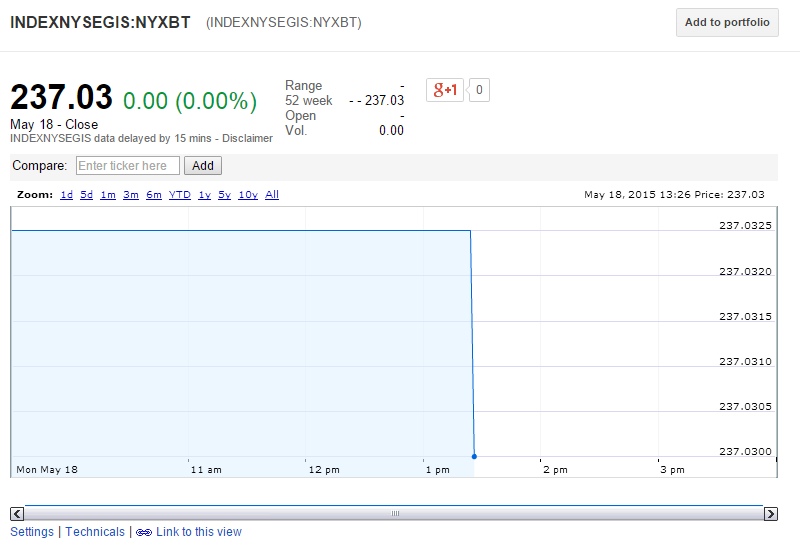 Initially, trading data will only come from Coinbase exchange. NYSE invested in the Bitcoin startup earlier this year as part of a record $75 million funding round. At least part of the strategy behind the investment now becomes clear, though it remains to be determined if the initiative is to serve as a springboard for future projects.

The index is the highest profile version of several that have thus far been adopted by companies and media in the industry. One of the better-known examples is that of bitcoin derivatives platform Tera Exchange, which produced an index that also tracks and carefully filters bitcoin trading data from select exchanges.

so this would make BTC-based CFDs and futures contracts easier?

If CME or EUREX were to create an ‘e-mini’ or ‘e-nano’ BTC derivatives contract, that would go a long way to solidify btc’s legitimacy.

You raise an interesting point. It can definitely help for CFDs and derivatives, in more ways than one. Time will tell if it solidifies BTC’s legitimacy, but for now, the quick win is the reliability of trading data.