We are surrounded by centralised ledgers

For the uninitiated, a ledger is simply a record of something — whether it be trades executed by traders, or financial transactions to buy goods and services – and as the amount of ‘data’ the world now produces continues to grow at parabolic rates, people’s ability to use and understand that data is lagging behind.

Storing financial records is done for a variety of reasons, including for audit and oversight purposes as espoused by financial regulators such as the FCA, NFA, SEC, CFTC and others.

Judging by what regulators have done in recent years, it is only when trouble arrives that regulators take action. If looking at the FX market specifically, the world of FX trading is a global network of centralised record-keepers that abide by ever-changing regulations, human emotions and technological systems.

Up until now, there has been no other option but to trust the various reams of ‘centralised authorities’, whether it be the central bank, a trading exchange or even a telecoms provider. With information having to flow through one single source, there are often tangible and intangible external variables, and to make matters worse, human error/malfeasance is practically impossible to mitigate.

If all transactions (financial or otherwise) are at the mercy of linear centralised systems, it means we are all exposed to a variety of risks – so could there be a better way?

Could the introduction of ‘blockchain’ purify existing systems of exchange and ledgers?

It is most definitely a feasible possibility, but by the same token, it will mean a whole heap of change.

Here is how a blockchain works in practise.

The speed with which ‘data’ is being created unfortunately means it can be easily damaged, lost, hacked or corrupted. Data security could possibly be the greatest challenge of the 21st Century.

Looking at data breach cases in recent times, ranging from Ashley Madison to Citigroup, reveals that not only financial data is considered sensitive. Personal details such as contact details and medical histories are all just as important. In cases where data breaches have led to persistent material damage, the consequences are often transitory.

Corruption at any level of a centralised organisation can cause distortion across the business and consequentially, can cause distortion for all its connected nodes (clients, employees, vendors etc). In the world of FX trading, manipulated transactions are difficult to detect due to the industry’s Over the Counter (OTC) nature and vast depth.

With over 10,000 FX brokers out there, each offering slightly deviated prices and with varying levels of access, FX and CFD trading has been made a fertile ground for manipulation.

The exclusion on the ledgers generates imbalance in the competition, like monopolies (SEPA, SWIFT) or sanctions between countries, and increased transaction fees.  The fundamental policies of financial laws are referring to transparency, honesty and protecting the interests of consumers. This is not the case in the current financial system, where risks seem to be increasing at a speed which financial institutions cannot control, nor predict.

A foreign exchange transaction is when one currency is exchanged for another.

Due to the FX market’s size, the FX global distribution network is considered to be decentralized. But is it?

A simple illustration shows that although the FX market is considered to be ‘de-centralised’, in actual fact, it is centralised with the master keys (total sum ledgers) held by the central bank(s). 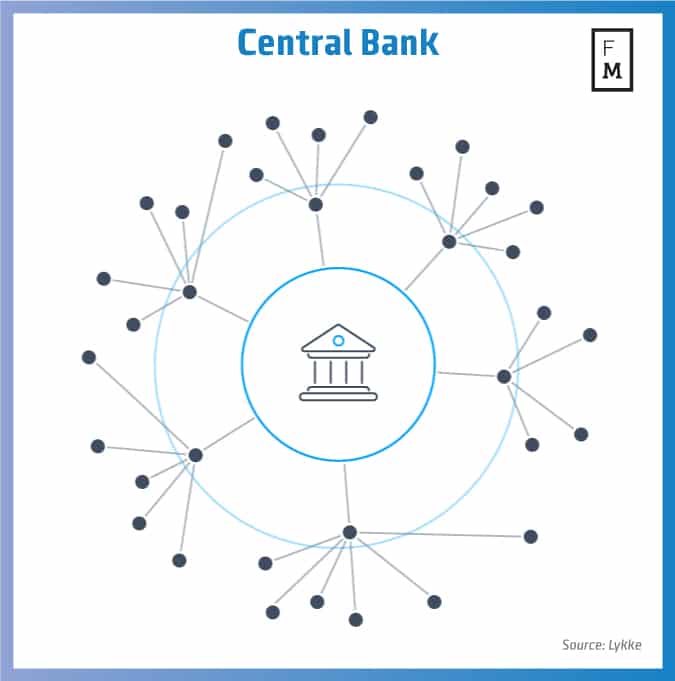 A currency is issued in the form of money, and distributed within an economy by the central bank (privately-held entities masquerading as government affiliates).

Currencies can be exchanged physically or electronically, from any place in the world, and through multiple hubs — banks, investment firms, agents, brokers etc. Despite the millions of FX market participants that take part in FX trading, currencies remain under the tight control of centralised authorities and are subject to multiple centralised reporting ledgers otherwise known as ‘repositories’.

Moreover, all information such as global supply and demand is only accessible by the governing bodies. The same bodies control the supply directly and the demand indirectly. The same bodies which can intervene in the FX market at any time.

Some would compare it to giving a fox the keys to the hen house – and expecting no ruffled feathers.

The FX reporting mechanisms are human and computer intensive, as well as cost heavy. The process begins from complicated FX trading software and ends up to global network protocols for financial transactions. The type, size and complexity of the transactions directly decide the type of systems required to manage them, and the type of security required. One huge point of difference is the fact that reporting protocols vary across various regions globally, which again makes risk mitigation and security more difficult to manage.

Far from being an efficient mechanism for currency exchange, the current system is complicated and opaque – a worldwide chain of traders, commissions and fees. A chain with the end-user (trader) at one end, and the provider (central bank) at the other.

The solution comes from decentralisation of record-keeping and greater availability of the information being stored. Lykke has created a multi-layered FX trading environment where all the trade information can be factored into one distributed ledger — the blockchain.

Here is how Lykke works in practise:

The FX industry is facing too many other drawbacks as well. Due to the recent financial crisis, an increased number of legal requirements is stalling companies’ earnings. A number of pre- and post- trade mechanisms which are set to be in place in order to act as safety nets are simply cutting profits. Auditors, accountants, repositories, clearing houses, software solutions, and compliance mechanisms are all links in a chain — an endless fee chain for the sake of a simple buy/sell trade.

Political and economic inefficiencies of the FX market can be resolved with the blockchain, or generally with Distributed Ledger Technology (DLT). Consider that the parameters called auditors, repositories, clearing houses etc. can be factored into one block of information.

The FX settlement date of ‘T+2’ or the daily rollover can be diminished to ‘T+0’, and that’s only the beginning.

Blockchain thinking can be applied to any type of product, not only for currency transactions. Direct settlement as well as direct ownership are the results of decentralising ledgers and encouraging greater access.

Next, immediate exchange of funds in an extremely secure and efficient environment. All of those transactions’ information, like volume and price, can be passed onto blocks of single or multiple trades. A sequence of such blocks can then be published on the global and open distributed ledger in the form of a blockchain.

All available block information is also encrypted. Market transparency doesn’t supersede personal privacy. Brokers can still have access to their clients’ information in such as for imposing necessary KYC/AML rules as an example.

The regulators can easily have access to the layer of all available transactions’ and market participants’ information. Money laundering, market manipulation and mispricing are made largely redundant through the concept of blockchain-powered decentralisation.

Issuance and distribution can be in a fully automated mode and the user can carry out digital issuance as individuals. With blockchain it is theoretically possible for an individual to issue a personal bond with the same structure as today’s government bonds; thereby raising capital to start a business or buy a home. This bond would be incorruptible because the underlying money supply (or the supply of bonds) cannot be increased or decreased without the entire blockchain knowing about it, and pricing in the changes.

Processes like crowdfunding, music rights, emissions or any alternative you can think of, can be tokenized and offered to the public in exchange for a currency (capital). Although intermediary steps could be removed — due to the complexity of some financial products — the professional investment institutions and their glitterati of licensed advisors, are still necessary pieces of the puzzle. Digitization in a smart and elegant way to link the FX industry with a variety of other markets – and keep the entire thing accountable to itself.

Blockchain has the potential to not only transform markets, but to terraform them from the ground up. Portfolios can be diversified with clients able to leverage their positions by gaining exposure to new markets by leveraging the markets themselves, not the capital invested.

At the same time, risk is significantly reduced and daily life becomes cheaper. Volatility is likely to fall with insurance premiums against market volatility (and default) falling substantially alongside.

The number of transactions facilitated by a current DLT can be considered as scarcity. An example of it is the execution speed (milliseconds in real markets), which it is still limited. Technological developments and global acceptance of these innovative methodologies will help towards achieving efficiency must sooner.

Several blockchains have been developed globally: public, private or consortium blockchains. The need for a universal public blockchain for FX transactions is there, and Lykke is providing the solution.

Such a blockchain could become a true global FX network, with the capability of integrating hybrid solutions, like multi-layer or multi-ledger add-ons used by FX brokers. Lykke’s vision is to develop a hybrid model where its decentralised P2P nature will not be affected by any market changes but will still be able to facilitate a better wat of exchange.

It’s not just about disruption and innovation. It’s about solving current problems by developing a fairer way of exchanging goods and services. The good news is that a solution is there and it works, the bad news is that as with most revolutionary innovation, it may involve seeing change occur one block at a time.

The world is still waiting for its Uber or Google moment when it comes Blockchain adoption. Right now it does not have that mass appeal to replace the traditional payment systems like credit cards and wire transfers.