The latest official data on the Japanese binary options market published today by the Financial Futures Association of Japan (FFAJ) shows a return to growth in trading volumes and number of accounts. The data reveals a respectable improvement in December 2015 over the previous month.

December trading volumes reached over ¥48 billion ($392 million) in total for the eight companies currently operating on the Japanese binary options market. The figure is 25.9% higher when compared to the month of November 2015, and back to the level last seen in August. The number of existing accounts grew to 336,010 in December, a minor increase of 2539 compared to the previous month. That also contributed to a higher number of active accounts, which reached 13,293 in total, 494 more accounts than in November.

In contrast to the monthly advance, a yearly comparison of the figures shows clearly that the Japanese industry still has plenty of room for growth. The December 2015’s ¥48 billion figure is down 32.7% compared with December 2014’s figure of ¥71 billion. The number of existing accounts is much higher when compared to December 2014’s 300,572 record which means that the average trading volume per existing client has crashed compared to the high monthly figure from the previous year. 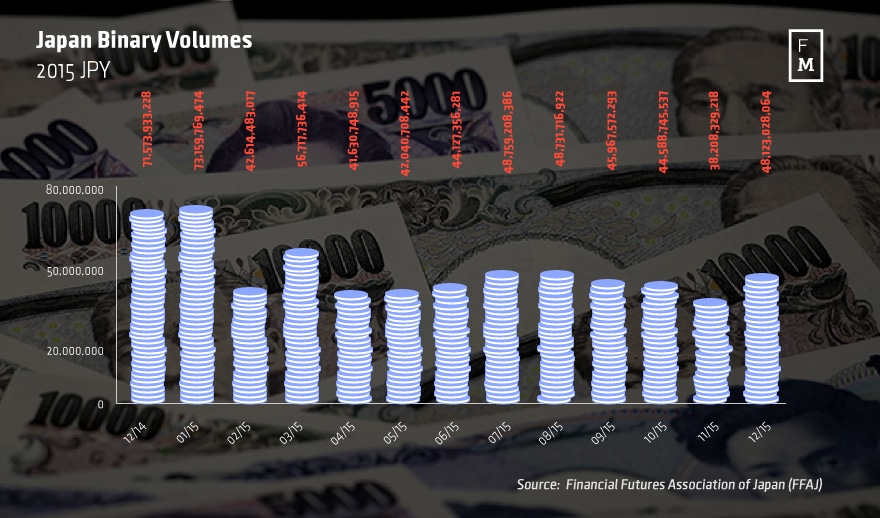 The FFAJ has also reported today that the trading of exchange forex products rebounded sharply in December 2015 as Japanese brokers have seen a rise of about 49.7 per cent to ¥3.88 trillion ($33.2 billion). Looking at the over-the-counter market, the figures rebounded by about 18 per cent in the final month of 2015 to ¥354.9 trillion ($3.02 trillion).