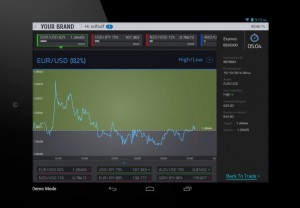 TechFinancials has announced the releasing of its trading platform’s mobile version, allowing brokers to tap into the continuously growing market of trading via smart devices. The app development was preceded by the company’s own research, in tune with the surge in multi-screen trading in the binary options space.

The main feature of the interface is its graphs display, which cover 80% of the screen. Traders are also able to see all their positions, open trades, read the news feed, perform simple chart drawings and check out their account status. Putting all the information available in one screen enhances the trader’s decision-making process, which is performed within a limited space compared to the standard PC monitor.

Eyal Rosenblum, Co-founder and Co-CEO of the company, commented on the mobile version by saying: “Maintaining the company’s approach of a simplified UI, we are very proud to pioneer another trading application which meets today’s users’ behavior and preferences. Our brokers yet again keep a strong competitive advantage for winning mass markets”. 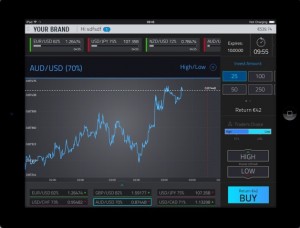 TechFinancials have been the only provider to focus both on the more established forex and CFD’s, as well as the increasingly popular binary options. With its latest development the company aims at expanding the cross-selling opportunities of their clients, covering the two staple mobile operating systems (iOS and Android).

Traders using the app are now able to have a detailed picture of the markets directly on their smartphones and tablets, allowing them to take quick and informed decisions on what they’d like to buy or sell.