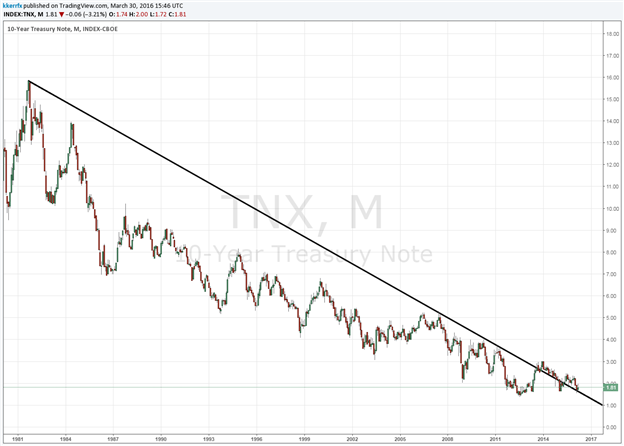 Back in September I wrote that I was looking for a potential low in yields around the middle of 1Q16 (Read HERE). The instrument I have been following is the TNX, which is the CBOE 10-year T-Note index based on the yield to maturity of the most recently auctioned 10-year note. It isn’t a perfect measure by any means, but is close enough for an FX guy like myself. With the index turning around on February 11 and putting in what looks like a decent secondary low against the bottom in 2012 I have been asking myself if the “widow maker” trade of the past three decades is finally coming to an end? Now I know my positive attitude towards yields will sound a bit crazy after Yellen’s dovish speech yesterday, but the cyclical relationships at the low last month are fairly compelling if you believe in these sort of things.

I use a variety of different cyclical techniques in my analysis, but the Pi cycle of 3,141 days (8.6 years) discovered by Martin Armstrong is certainly one of the more useful ones in longer timeframes. 4 cycles of 8.6 years (34.4 years) is often an important turning point especially when the trend persists for the duration of the period which brings me back to treasury yields. The TNX peaked on September 30, 1981 just shy of 16%. The amount of time between the September 1981 high and the February 2016 low was 12,552 calendar days. That is just 12 days shy of a perfect 34.4 year cycle of 12,564 (3,141 x 4). In a multi-decade cycle relationship that is pretty much a direct hit.

From there yields traded pretty sharply higher until March 16, which coincidentally was day 34 off the low (fractal 8.6 x 4). Now conventional wisdom (and logic for that matter) would suggest after yesterday that yields are going to do what they always do and head lower (crushing the hopes of yield bulls yet again). I am not going to say it isn’t going to happen. It is called the “widow maker” trade for a reason, but if there was ever a time where we could see a surprise and change in behavior then this seems like it could be it. A hold of the February 1.56 low (and ideally retracements much higher up) followed by a move through 2.00 would be very bullish in my view and set into motion a period of intense volatility in the markets. I still believe what I wrote in September that the “real move” higher in rates will come when the market takes back the pricing mechanism of the cost of money, but that type of loss of confidence doesn’t happen overnight. It is likely a ways off. If I were to venture a guess on what could spur an initial shift higher in rates I would say it is probably what nobody is expecting – an inflation scare.