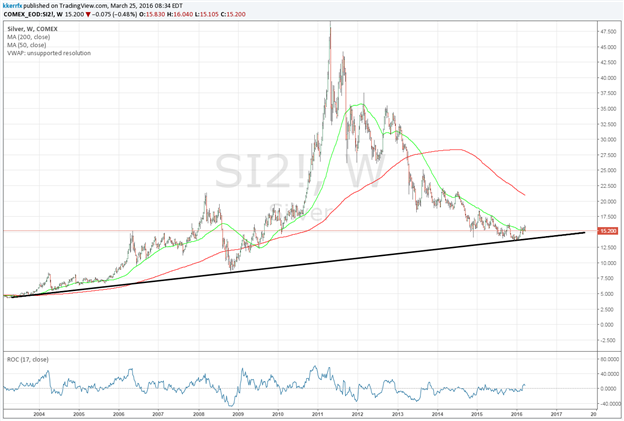 I have written recently about the long-term timing symmetry in silver at the lows in November of 2014 and January of this year. The low in January marked the 50% retracement of the time elapsed between the low in November of 2001 and the high in April of 2011. The secondary low in November of 2014 occurred at the 38% retracement in time of that same ten-year advance. As I wrote a couple of weeks ago, these double lows from important long-term timing symmetry point to a more important bottom in being potentially in place. I do not spend too much time looking at futures charts because of the discrepancy that you can get on the continuous charts. That said, the long-term Comex chart shows a pretty clear trendline touch and hold in December & January from a line connecting the 2003 & 2008 lows which seem to further confirm my long-term positive thinking. I am watching the potential inverse head & shoulders pattern closely on the daily chart.

Spot has struggled with the neckline of this potential pattern over the past few weeks as breaks above have yielded no real positive momentum. A close over the October highs around 16.35 would be strong technical evidence that the long-term trend has indeed changed for the metal. In the near-term, my concern lies with the potential cyclical influences from Gold going into the end of the quarter, but only aggressive weakness under 14.60 would start to signal the broader basing view was premature.