Dr. Copper in the House? 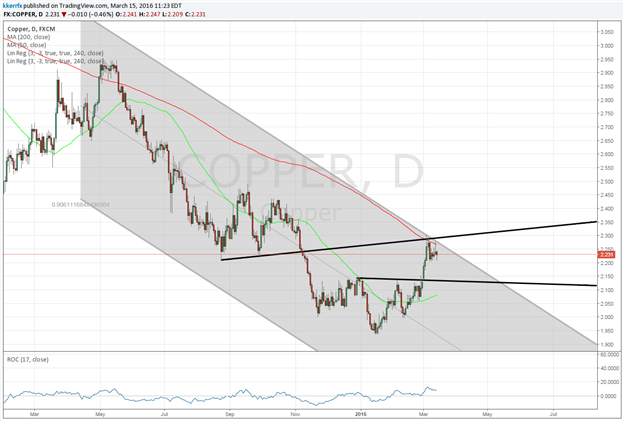 One of the most overused sayings in financial research is that “Copper has a PHD in economics”. In other words, the metal is a good bellwether for the true state of the global economy because of its widespread use. I think the advent of things like PVC has probably cut a little bit into the metal’s predictive value, but it is still a very useful market to keep tabs on (especially with central banks at war with deflation).

The 18%+ rally in the metal since January has been accompanied by a more than 50% rise in the price of Brent Crude and an 11% rally in “society’s mood barometer” the S&P 500. The SPX actually managed to finish last week above its 200-day moving average so the obvious question on most technicians’ minds is whether “pro-risk” markets are starting back up for real this time or not. As positive as some of these other markets look, Copper still suggests at least some caution is required as the commodity failed earlier in the month at a confluence of the 200-day moving average, an internal trendline of the August/September lows and the top of the 1-year standard deviation channel. On the positive side, I like where the commodity found support back in January as the 1.94/1.97 area marked a nice convergence of the 78.6% retracement of the 2001 – 2011 advance and a trendline connecting the early 2000’s lows with the 2008 low on the continuous futures chart. If the market is going to mount a more serious recovery then that is probably the spot you want to see it commence from. A confirmed inverse head & shoulders on the daily and weekly charts doesn’t hurt things either, but the market has reached the point “where the rubber meets the road” in a sense as the zone between 2.26 and 2.29 is precisely where one would expect the broader downtrend to try and reassert itself. The next few days/weeks look critical in this regard, as traction over 2.29 opens the door to another important leg higher in the metal and probably in risk. A continued inability to get through there and the odds are we head back down – possibly hard. Stay tuned.