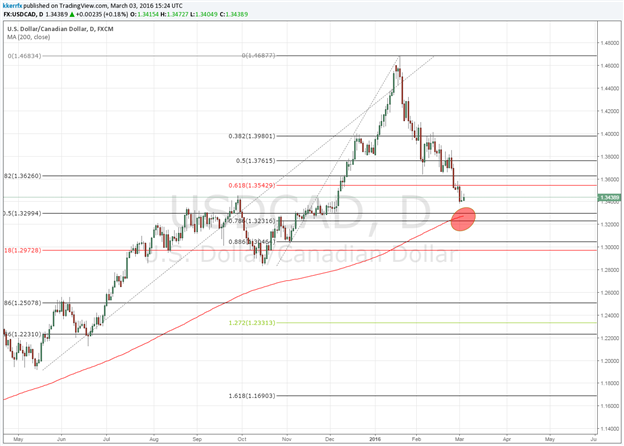 I turned negative on USD/CAD last month when it failed to recover from the cyclical turn window around February 12. I have found that when timing relationships fail to elicit a response from an instrument it is usually a pretty strong sign that the prevailing trend is still very strong and probably has more room to run. That certainly seems to have been the case with USD/CAD as the pair has fallen some four big figures since mid-February. We have another timing test coming up in a few days as several key cyclical relationships are aligning later next week. If the broader uptrend is going to reassert itself then that is probably the time when it should do it. A failure to turn back up by the end of next week would have some pretty negative implications for the exchange rate in the medium-term and open the door to another important bout of USD liquidation.

My price focus heading into the second half of next week is on the 1.3300 – 1.3240 zone as it marks a nice confluence of the 50% retracement of the May – January advance, the 200-day moving average and the 61.8% retracement of the October – January move higher. If USD is going to muster a turnaround of any significance then I would like to see it happen from somewhere around there. I think time is still the more important variable here, so an undercut of this zone over the next few days does not necessarily invalidate the timing (but it would raise some serious doubts). However, new trend lows after next week would indeed invalidate, while a move back through 1.3640 would help confirm that a low of some importance is in place.