The integrity of voting information and polling data surrounding elections is constantly being thrown into doubt in the modern era. The 2016 election in the US is the latest testament to this phenomenon, facing fresh allegations of hacking or manipulation. However, the solution to these woes may come from an unlikely source – blockchain technology.

The current design of the voting system puts the control in a centralized node, which can usually be hacked or manipulated in some way. This can be extremely debilitating towards the public psyche as well as outwardly crippling to a nation if such actions by foreign powers were successful. Today, whether Russians hacked their way into rigging the 2016 Presidential election in the US continues to be a mystery.

Often voters lose their faith in democracy when they hear about elections being rigged or voting machines being compromised. In 2005, it was shown that it was possible to hack into a Diebold voting machine to change tallies in the time it takes to cast a vote, while DefCon hackers broke into U.S. voting machines this year.

Such situations are not unique to US, as variations of these problems exist across all democracies of the world. In India, there were huge parliamentary debates recently about voting machines rigged and physical security of a poll booth is often jeopardized in poll booth hijacking, where people physically and forcefully take control of a poll both to manipulate voting. 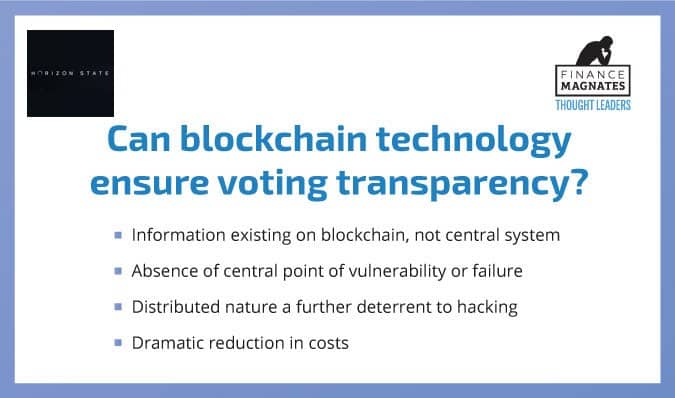 Is Blockchain the solution?

By providing both security and transparency – reducing the risk of foul play and enabling everyone to audit the results, blockchain solutions could reshape the future of elections.

In blockchain the records are not stored on a central system but exists simultaneously on a blockchain, which is supported by millions of nodes, thus eliminating the possibility of single point of failure and making the data incorruptible.

Horizon State is one such startup utilizing blockchain technology to build a ballot box, which can’t be hacked or tampered. The distributed nature of the blockchain also makes it trustless and secure. One of the interesting features it offers is option to have non-binary votes.

Our current system allows us to vote for just one candidate – Horizon State can support weighted votes amongst different candidates. This can prevent non-favorable candidates from having a chance to win elections, as voters would have a chance to distribute their vote amongst the good candidates.

“Blockchain is already driving a tremendous amount of investment and innovation across a wide range of industries, starting with financial services. The government could be next”, noted RJ Krawiec on TechCrunch, who correctly predicted blockchain startups serving governments would soon pop up.

The Horizon State #ICO is now LIVE! Early bird token bonus at https://t.co/a0sFlE9C4J for the next 24hrs only #ethereum #blockchain #auspol pic.twitter.com/ORP4nFGDzJ

A Blockchain democracy can deal can easily make decisions like whether a new bullet train should be imported in city or a new dam should be built with the help of constituency voting for it. This would also lead to inclusive governance where the citizens would regularly feel that their opinion matters and is actually being used by the government.

Unfortunately, modern voting systems aren’t very modern at all. People still need to leave their homes, go to a designated place to cast their vote. Alternatively, blockchain democracy would make the process much simpler where people can vote from anywhere.

Another use case could be of polling about budget allocation in a government, the poll allows members to assign their preferences for percentages of the budget to coarse-grained causes. Once the poll is completed, the allocation of funds to the various causes is done, based on the desire of the membership.

Horizon State co-Founder, Jamie Skella commented: “Democracy is the opportunity to share in the decision-making processes that relates to the shared matters which affect us. Democracy is about reaching consensus on how to best use our shared resources to achieve the best outcomes for our partners, children, colleagues, staff, and fellow citizens. Where there are shared resources in any cooperative environment, there remains no question: we need better shared decision-making tools and processes.”

Applications beyond the voting platform

Their roadmap is not limited to being a voting platform as they also plan to extend their scope by offering intelligence to candidates, blockchain fund raising platform for political parties/individual contestants and AI systems for information gathering and research analysis over the roadmap till 2020.

There are many incentives for using such systems – they can be cost effective since voting in a blockchain based democracy would cost magnitudes of time less than what it currently costs to hold elections while being more secure and robust. As an example, HST claims that the cost per vote would always be less than $0.5 whereas currently Federal elections cost government upwards for $10 per vote.

The accurate results of elections could be almost instantly released while everyone having a chance to check it’s authentic Currently, the technology is still in its infancy, but it matures alongside the young voters it will one day help, and looks to be a key part of our collective future.