The retail trading space continues to shift its focus towards cryptocurrencies, with many brokerages still lagging behind and trying to catch up. NewsBTC realized this trend early on, having already aggressively shifted its emphasis, capabilities, and personnel to covering the crypto-trading segment.

Despite this shifting emphasis, the cryptocurrency and blockchain-focused media company has continued to also make inroads into the FX space, culminating in multiple strategic accords over the past few months. This includes partnerships with foreign exchange news portal, FxPips and a new deal with Fintechist, which capped off a busy H2 for the group.

During much of 2017, NewsBTC has been a trendsetter in terms of its dynamic coverage of not only the FX arena but also cryptocurrencies. Indeed, the influx of initial coin offerings (ICOs), soaring crypto prices, and their steadfast adoption at brokerages has heralded a new era of trading and consequently analysis and media coverage. 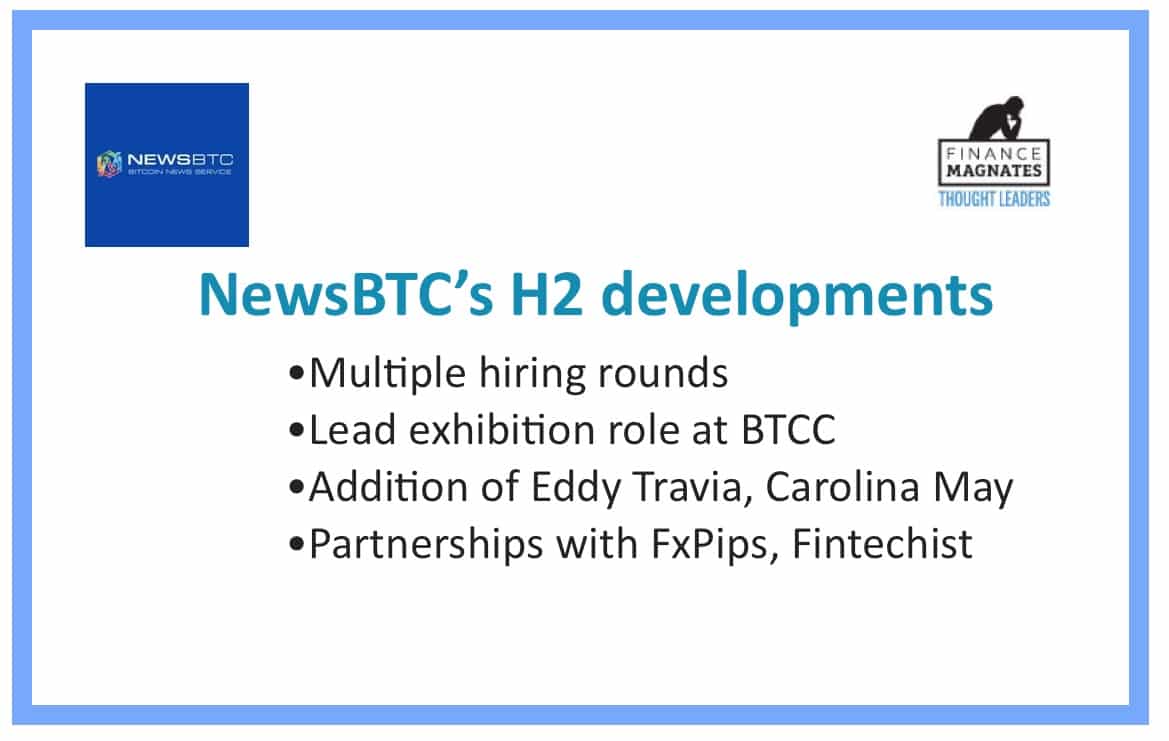 The most comprehensive news feed to date

As a result, NewsBTC has strategically positioned itself to be at the forefront of this development, which has been busy aggressively securing talent to bolster its the news and analysis capabilities. Over the past few months, the group has been hiring a wide range of skilled writers and experts multiple fields, making its news feed and information one of the comprehensive in the market.

“These are experts who have been following cryptocurrencies for a long time now, some dating back to 2014-15 when the crypto market wasn’t as important as it is today. They know how to connect the dots and read the signs using several sources apart from graphs and charts,” explained Carolina May, Strategic Advisor to NewsBTC.

In parallel, the group has also brought in veteran traders who are involved in both FX and contracts-for-difference (CFDs), expanding on its existing crypto coverage. While many venues have been strengthening their own respective cryptocurrency focus, NewsBTC has opted to bring in crypto experts and traders, which it believes is central to reporting on such instruments and trends.

“The amount of analysis we cover is more than anyone in the industry at the moment not only in quantity but in quality. NewsBTC is not just confined to BTC but also other crypto-fiat pairs include BTCJPY, for example, which given the recent developments in Japanese ecosystem is very interesting for traders’ needs. We are working on adding improvements to our current design and new tools to continue responding to our user,” explained Ms. May.

In total, NewsBTC’s growing team now constitutes one of the talented rosters, proficient in virtually every segment of the financial services industry. Its news coverage has also quickly developed one of the more versatile feeds available, focusing on all corners of the crypto and retail industry, including an emphasis on brokers, ICOs, and other developments.