London Summit 2018 is in the books with NewsBTC’s presence being felt during the entire event. With NewsBTC as the outdoor area sponsor for the summit, the cryptocurrency news outlet was strategically positioned all day long, as attendees and exhibitors flocked outside to smoke and enjoy drinks. 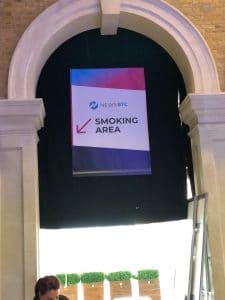 Smoking will kill you but apparently not any deals, as the area was a hot bed for activity on November 14. Industry executives aplenty were seen shaking hands and closing deals in the NewsBTC branded pavilion, which was aided by unusually nice weather during November.

Indeed, with the backdrop of Tower Bridge and the Thames, the area proved to be one of the most popular areas throughout the event.

The summit saw over 3,000 individuals in attendance, though filtered out over the entirety of the Old Billingsgate. Apparently NewsBTC did not get this memo however, as the outdoor area was literally jam packed throughout the day and served as one of the most consistently busy places.

Following multiple internal developments, expansions, and new areas of focus, the group has managed to keep growing. With more expansive news coverage than ever before and a growing team, NewsBTC is looking ahead to 2019 and beyond as its positioned itself to continue this trajectory.