An abundance of positive news from the Euro Area released earlier on Tuesday’s session have contributed a stronger outlook for the monetary bloc as the European Central Bank contemplates its next moves.

Although no shift in policy is imminently expected, the broad-based advance in key metrics including employment, inflation, and gross domestic product highlight the progress being made towards achieving the ECB’s goals. As a result, the Euro continues to gain ground versus peers after a shaky performance the last few days.

With respect to the Yen, the Euro is climbing on the session after the Bank of Japan reaffirmed its own position on monetary policy. Although there were some positive surprises in the form of an upgraded outlook, global uncertainty has been a significant force behind the most recent appreciation in the haven currency.

However, with the fundamental situation improving across the globe, the most recent pressure facing the EURJPY pair may soon give way to greater gains and new multi-month highs especially if the trajectory of economic activity is fulfilled.

An Abundance of Positive Data

When combined with the upgraded outlook from the Bank of Japan overnight, the latest gross domestic product figures from the Euro Area indicate that the monetary union is making continued strides in the direction of recovery.

Between the ultra accommodative policy measures including interest rates at 0.00%, negative deposit rates, and asset purchases, the European Central Bank has managed to revitalize growth to a degree. At 1.70%, expansion during 2016 was still a little more tepid than policymakers would prefer, however, other gauges of fundamental economic activity proved significantly more upbeat.

For one thing, as preliminary figures showed, inflation continues to experience a pickup on a headline basis. At 1.80%, Euro Area inflation is trending at the highest point since February of 2013. Although core inflation remained on hold at 0.90% while much of the effect on headline inflation was attributed to rising energy price, the headline figure is evidence of improvement. Furthermore, accompanying the data was the latest jobless statistics for December.

Unemployment at 9.60% marks the best reading for the Euro Area since 2009. With the economic rebound firing on all cylinders, the ECB’s asset purchase program may come to a sooner conclusion than previously anticipated.

While the fundamentals of the Euro Area continue to improve, paving the way for tightening policy down the road, comparable Japanese fundamentals remain scattered. Unemployment is till trending at the 3.10% mark, but inflation remains a sticky issue. With core inflation still in deflationary territory, it is difficult to foresee a significant change in the measure of consumer prices near-term.

As a result, no imminent changes are expected to Japanese monetary policy despite two dissenting voting voices. The main driver behind the most recent bout of Yen strength has much more to do with broader uncertainty than financial developments. Therefore, strictly from the policy and fundamental perspective, the Euro is set to outperform the Yen over the medium-term.

With the latest GDP and inflation data at its back, the Euro can continue to climb unencumbered against the Yen despite the shakier outlook for fiscal policy and geopolitics across the globe. Despite the Yen traditionally strengthening during periods of heightened market anxiety, as the figures show, strides are being made.

Furthermore, the Bank of Japan’s more upbeat and upgraded projections for 2016, 2017, and 2018 growth give credence to the idea that the near-term upward trend begun in the middle of January is sustainable over the medium-term. Although EURJPY is currently encountering some resistance at the 50-day moving average, the 200-day moving average is trending below the price action, acting as support against any prolonged downturn. 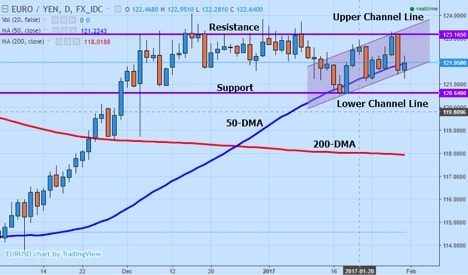 Besides the moving averages, the emergence of a bullish equidistant channel formation adds to the upside bias currently prevailing in the EURJPY pair. Ideally, bullish positions initiated at the lower channel line should target the upper channel line.

However, should EURJPY experience a candlestick close below the lower channel line, it could suggest a downside breakout in the pair towards support at 120.640. To be a confirmed breakout, the move must be accompanied by heightened trading volumes and momentum. However, barring a breakout, the level to watch on the upside is 123.165 before trying to make a run at the multi-month heights sitting at 124.000.

What Traders Should Watch For

With the remaining fundamental data points for the week proving inconsequential relative to the inflation, GDP, employment, and monetary policy decisions delivered by each respective country, the only headwinds facing EURJPY appreciation are political.

Many surprises lie on the horizon for investors…

With Donald Trump taking a heavy handed and bombastic approach to fiscal policy and government, many surprises lie on the horizon for investors. Additionally, Friday’s release of the Bank of Japan’s monetary policy meeting minutes combined with new rumors about Greece being back on the brink could sink the ongoing momentum higher.

However, should these issues come to resolution and display an expectation of a brightening outlook, any headwinds may quickly turn to tailwinds for the EURJPY pair.