There was no lack of activity during the first day of the Forex Magnates London Summit. As a result, one of the biggest complaints from attendees was that they wanted to take advantage of every second until they realized that they were starving from moving from event to event without taking time off to eat.

Following the morning brunch (yes, there was food there too) was the Networking Blitz. This was somewhat of a mystery box for the day. Best described as ‘speed dating’ for FX, twenty or so firms manned small tables and pitched their wares. No bright lights and large exhibition booths, just a single standing table. Each presenter had a stack of tickets for free drinks which they gave out to attendees who approached their tables. Well, that was definitely different. After taking 30 minutes or so to pick, the event was packed and networking was on (see below). 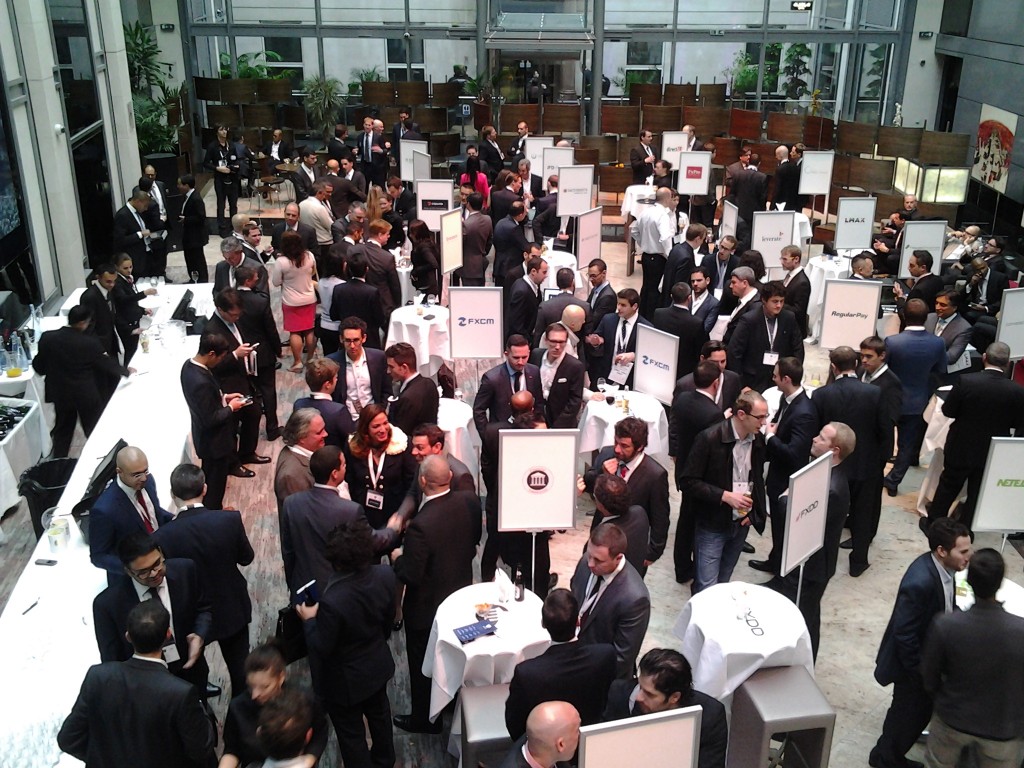 Coming into the Summit, consensus among the Forex Magnates’ team was that the panel had the potential to be among the best, or it could flop. Having a spectrum of panellists who were varied from firmly entrenched in the retail forex, all the way to the most institutional of institutional brought diversity. But could this diversity be woven together or not? that was the question. The final result was arguably one of the best panels that Forex Magnates had put together. More than that, the varied views did a great job of surmising the major trends facing the FX industry.

Is technology leading to higher volumes? The short answer from all panellists was yes, but there is more to the story. Explaining, Viral Tolat mentioned that more than just being a driver of volumes due to the advent of electronic trading, technology is leading to an advancement of distribution. Jakub Zablocki added that beyond tech, the overall industry decrease in spreads is also a major driver of volumes. But, this had led to a greater importance of having good technology to handle this order flow and the risks it brings. Speaking about relationships, John Beckert concluded that scalable growth was the result of advancements in technology. But, FX is still a people business that is driven by their creativity and client relationships, and this is what grows businesses.

Fragmentation: Answering about challenges brokers face, Andrew Ralich explained differentiation from the competition. This had led to brokers wanting to be able to market a variety of products and customize their offerings. For technology firms this means being able to handle the integration and standardization of multiple products, assets and platforms.

FX a leader in technology: Continuing the talk about fragmentation, this took us to why FX is becoming a leader in technology. Viral Tolat stated that people refer to FX being a latecomer to technology and electronic trading, but that we are seeing FX becoming a leader in connecting fragmented markets. Explaining where this is taking place, Harsha Bhat said that FX is a leader in handling multi-jurisdiction trading, that just doesn’t exist in the same ways with other asset classes. John Beckert added that while equities are viewed as the leader in technology, it is a little misleading. As a centralized market, technology in equities is based on getting to traders before everyone else. But FX is based on joining together a fragmented market within one central system.

Everyone is doing everything, adapt or die! Known for developing in-house, Trevor Young spoke a bit about OANDA’s open architecture future and launching third party integration. He mentioned that they have their core areas that bring value, but will be looking to offer third party products, where those offerings bring greater value. On this note, acquiring Currensee was part of this direction. Similarly, when discussing social trading, two of the more involved panellists were Harsha Baht and Viral Tolat who brought up the liquidity challenges that copy trading brings, and how they are developing products to handle these order flows.

Costs: Panellists mentioned that costs have fallen for new brokers to launch into the market. But, although costs have fallen, this had led to greater competition and decreased profits. As a result, decreases in expenses are now going towards handling lower margins. This is causing a situation where you have the haves and have-nots. Firms that are slow to adopt to the margin compression trend are seeing technology lead to higher overall costs as they need to fight harder to save their existing business. On the other hand, efficient firms are emerging that are able to grow their businesses by offering tighter pricing. (The wide spectrum of forex valuations in 2013, from premium IPOs, to firesales can be attributed to this trend of how brokers are handling their technology)

Also covered, were such items as regulations, systematic risk, and whether to outsource IT.

wow. more is covered in one day at an FM summit than perhaps all the FX news announcements in the world over the past 6-12 months.