Corlytics, a provider of regulatory risk intelligence, has recently conducted an in-depth analysis of global regulatory sanctions. The report discloses figures that provide beneficial insight regarding the current state of the financial industry, and the extent to which violations of regulatory restrictions have reached. As the door has closed on 2017, it is imperative to elicit substantive evidence of patterns that can induce clear conclusions pertaining to the influence of the global regulatory framework.

The underlying sentiment of the report is indicative of a rise in non-financial sanctions, including market bans, injunctions and jail time. The report specifies that there have been violations of market conduct leading to 139 market bans 2012. Moreover, between 2012 and Q3 2017, actions of misconduct directly resulted in 28 cases of imprisonment.

Corlytics Chief Executive Officer, John Byrne, provided Finance Magnates with an exclusive statement regarding the findings from the report. With regard to rising non-financial sanctions, he said: “Many global regulators have decided to make individuals responsible for actions taken either by them or under their watch, in an attempt to prevent market misconduct. This is seen as a more effective punishment as people are less likely to gamble with their own career and their own freedom, than they are with the cash reserves of the bank. Market bans are increasingly popular ending the careers and future earning potential of individuals, and imprisonment is becoming increasingly popular which is something that neither an individual trader nor senior manager wants to encounter. This opinion also seems to be borne out by the numbers. Non-financial sanctions, increased year on year to 2016. In 2015, there were 66 non financial sanctions – this number of non-financial sanctions coincides with a drop in the total value of enforcements into 2016. This seems to have been the peak for Market Conduct fines. By that stage, individuals understood the consequences of misconduct actions. 2016 saw the largest number of non-financial sanctions at 83. And interestingly, was the smallest total enforcement value over the period from 2012-2017.”

While non-financial sanctions are on the rise, monetary fines remain a prevalent source of deterring unlawful activity in the financial industry. Since 2012, worldwide fines stemming from market conduct violations have amounted to $26.41 billion. US regulatory bodies are responsible for 80% of these fines, 45% of which were issued to seven European banks. On a more detailed level, the US appears to have charged two US financial institutions with over $2 billion in penalties, while three European organizations accumulated the same amount, illustrating a stern approach by US regulators across the board.

When asked about the distribution of financial sanction by US regulators, Mr. Byrne commented: “There is a perception that European Banks are penalized by US regulators and a first glance at enforcement data would certainly seem to support this theory. However, when looking carefully at the data, it would appear that European banks violate regulations and receive resulting enforcement consequences. When US banks understand the potential financial and non-financial consequences of non-compliance, they act accordingly. The EU institutions seem to lag behind.” 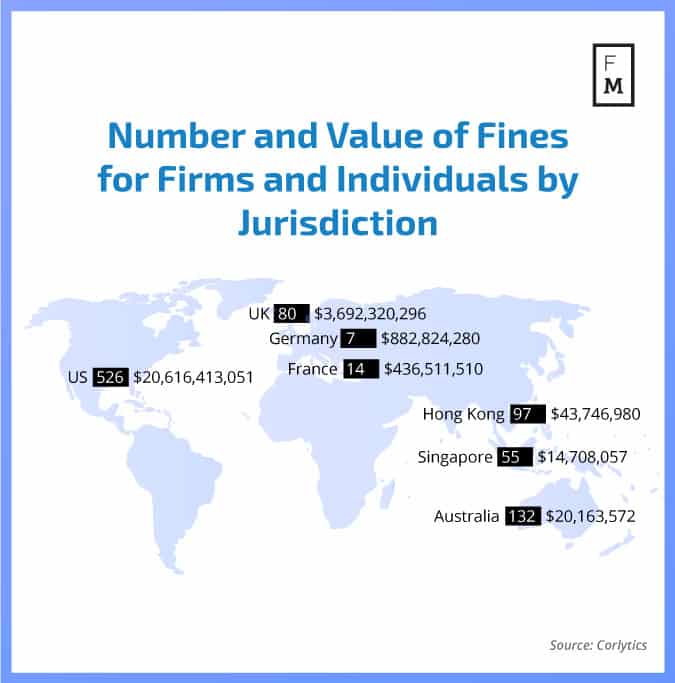 Market conduct associated fines are categorized as any acts that do not adhere to policy associated with “consumer protection, market conduct rules and ethical codes of conduct.” Within the US and other developed countries, market conduct covers issue pertaining to “corporate governance and incentives, organizational systems, competition and anti-trust.” With regard to the causes of monetary sanctions, 85% of all market conduct fines were attributed to market abuse and disclosure violations.

While the US remains the clear leader in fines appropriation, German regulators took the lead in the category of anti-competitive behavior, with a 35% share of distributed fines, while the US gave out 25% of the total fines for such violations. Meanwhile, the UK and France each contributed 20% of fines related to violations of anti-competitive policies and restrictions.

Further analysis of US fiscal penalties illustrates the sources of the distribution of fines. The Securities and Exchange Commission (SEC) and Commodity Futures Trading Commissions (CFTC) combines for 20% of the overall global enforcement actions, with the CFTC handing out $5 billion in fines. Meanwhile, the Department of Justice (DoJ) were tough on institutions and individuals alike, totaling $6 billion of global penalties. The SEC and New York State Department of Financial Services (NYDFS) each were responsible for over $1 billion in market conduct related fines. Relative to its US regulatory counterparts, the UK’s FCA combined to give out more than $3.1 billion in penalties during the same time frame. 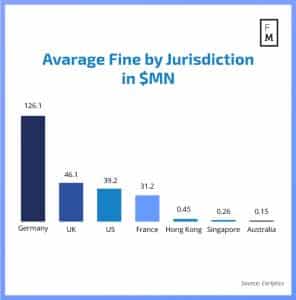 Looking ahead, Mr. Byrne offered Finance Magnates his personal views on regulatory enforcement trends for the upcoming year. “Corlytics is a world leader in determining regulatory risk impact. We believe regulatory enforcement will change in many areas over the year. In particular, we will see many regulators actively addressing crypto currencies and their derivatives. We will also see a significant focus in both data privacy and data security globally from regulators (GDPR).”