The Commodity Futures Trading Commission (CFTC) today announced its 2019 annual enforcement and compliance results, highlighted by a series of high-impact cases involving charges with manipulation, spoofing, and unlawful use of customer funds.

During CFTC’s 2019 fiscal year, which spanned October 1, 2018, to September 30, 2019, the agency’s enforcement actions secured more than $1.3 billion in restitution, disgorgement, and penalties. This figure is up 39 percent from the previous year, and also stands as the fourth-highest total in the agency’s history.

All in, the CFTC brought 69 enforcement-related actions, slightly higher from 67 in 2018, and pursued what it called significant and complex litigation in different cases. Out of this figure, 65 percent of all cases involved charges of commodities fraud, manipulative conduct, or spoofing. 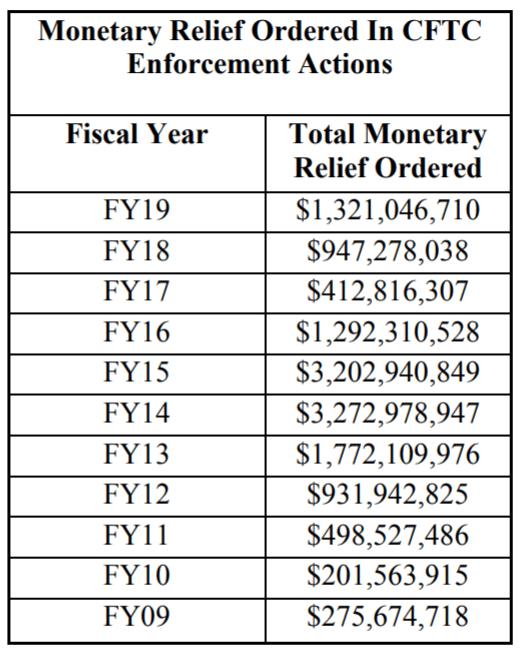 The report also highlights several initiatives by the CFTC’s Division of Enforcement focused on supporting its whistleblower program. Whistleblowing has become a staple of multiple US regulatory regimes, namely those of the US Commodity Futures Trading Commission (CFTC) and the SEC. Both entities have deployed programs or rewards to individuals in a bid to help support or streamline investigations.

The CFTC issued five whistleblower awards in 2019, totaling about $15 million, which was far down from the record $75 million it handed out during 2018 when five awards went to tipsters, including the largest award of $30 million. 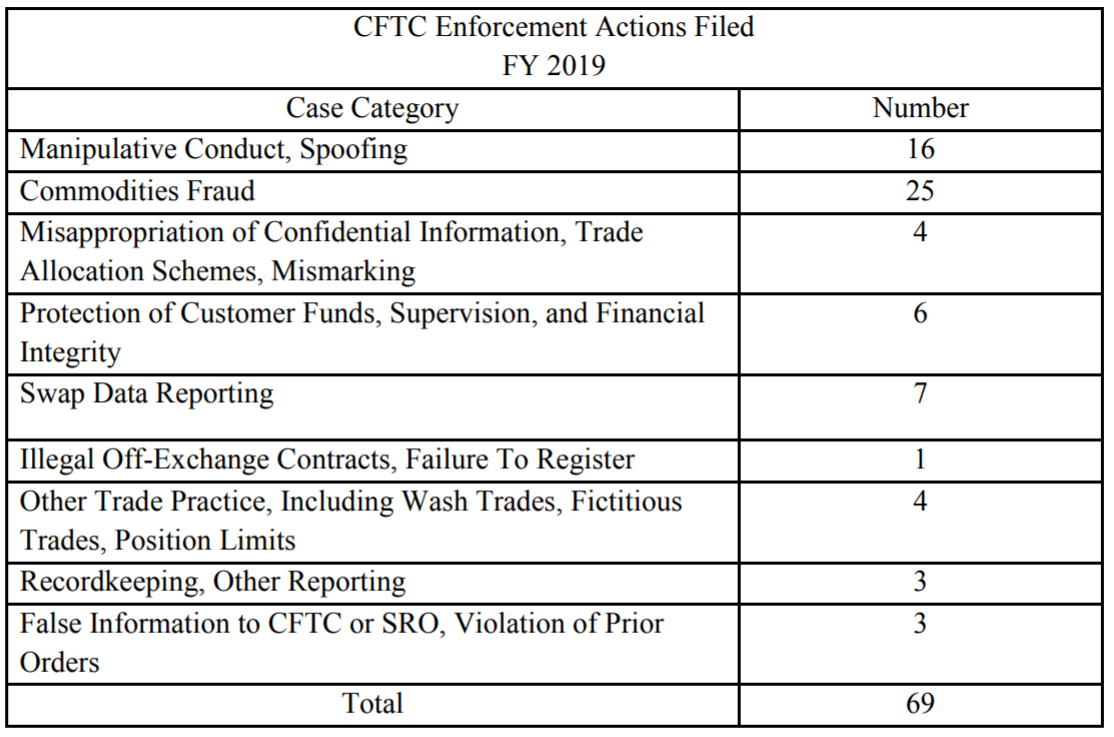 The report highlights a few enforcement actions against cryptocurrency schemes announced in 2019 as key milestones. The first was a Bitcoin trading firm, and its principal charged with a $147 million fraud. The US regulator for derivatives and commodities markets explained that it successfully litigated the cases involving digital assets that satisfy the statutory definition of a commodity.

“Notably, enforcement activity at the Commission shows no sign of slowing down as we enter the new Fiscal Year (2020). On July 15, 2019, Heath P. Tarbert was sworn in as the Fourteenth Chairman of the CFTC. Chairman Tarbert has made clear that, under his leadership, the CFTC will be tough on those who break the rules. He has carried through on that commitment, with the Commission having filed 48 enforcement actions from July 15 through September 30 (nearly 70% of the actions for FY 2019),” the report says.

Share this article
Tags: CFTC
Got a news tip? Let Us Know