Announcing performance figures for June, FXSpotStream has released that June average daily volumes (ADV) were 54% above the same period in 2014 as well as growing 24% from May. While the multi-bank FX and precious metals platform provider doesn’t report in-depth details of their volumes, they have revealed that daily activity is in the billions of dollars trades a day, and “multiple trillions” so far for 2015.

Along with providing a performance update, FXSpotStream also announced the launch of a new web-based HTML5 GUI. Using technology from SmartTrade, the new GUI adds to their existing downloadable platform and API connection that had been available for accessing FXSpotStream’s liquidity. 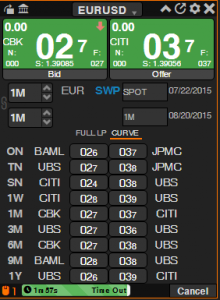 According to FXSpotStream CEO Alan F. Schwartz, the launch of the web-based GUI was based on meeting client demand. Currently, the majority of trades on the electronic platform are performed via API connections between clients and FXSpotStream. With the additional GUI, it is expected to provide customers with greater access to both placing trades and monitoring their accounts without the need of using the downloadable platform.

Commenting on the GUI launch and product expansion, Schwartz stated, “The launch of the new GUI continues the rapid expansion of the service this year where we have already added new order types to our API; added two more Liquidity Providers; Credit Suisse and Standard Chartered Bank; and opened our London office.”

Share this article
Tags: FXSpotStream / Smarttrade
Got a news tip? Let Us Know