Major ECNs in the foreign exchange trading industry have marked some declines in month-on-month figures. While the first full summer month has been much slower than the explosive June, when the Brexit vote triggered some unprecedented GBP moves, the numbers for July are quite solid considering the seasonality of the markets.

Pockets of volatility have impacted trading volumes on certain days with the most notable spikes related to the ECBs and the Bank of Japan’s rates decisions and to the disappointing GDP growth figures in the US which were announced on the final trading day of the month.

Just like Finance Magnates predicted in the aftermath of the Brexit vote, this summer is different in terms of trading volumes in the industry and that is primarily related to the unlocking of volatility at the end of June. Looking towards the month of August, the key factors that are going to affect trading volumes are the Fed’s outlook for interest rates and the prospective slowdown in the UK.

Fastmatch trading volumes have declined 24.6 per cent on a nominal basis to a total of $270 billion during the month of July. While the decline is material, the figure is still a whopping 46 per cent higher than in July 2015.

Fastmatch has continued delivering strong metrics in light of its recent effort to expand its teams globally with some key changes in the offering and key hires in recent months boosting the trading venue’s appeal. 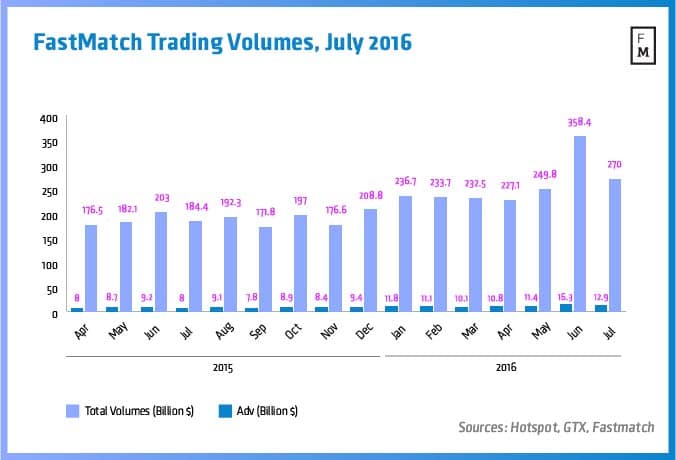 FXSpotStream has released its latest set of trading volumes to the public with figures for the month of July remaining solid. The company has reported that total trading volumes amounted to $412.6 billion which is lower only by 9.6 per cent when compared to last month’s figures which were greatly impacted by the Brexit vote.

The foreign exchange ECN (Electronic Communications Network) trading venue has marked Average Daily Volumes (ADV) at $19.6 billion, a figure that is higher by 39.6 per cent when compared to a year ago and lower than last month by merely 5.3 per cent. The only company that has registered such impressive year-on-year growth amongst major ECNs is Fastmatch. 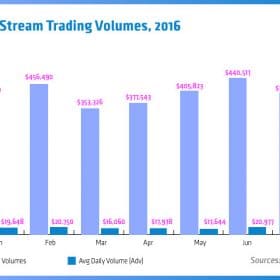 Considering the impact of the 4th of July holidays on these figures, which usually lead to a couple of days with slower trading activity, the performance of FXSpotStream in July has been quite solid. The metrics have continued to be impacted by pockets of volatility which has been the theme since the beginning of the year. 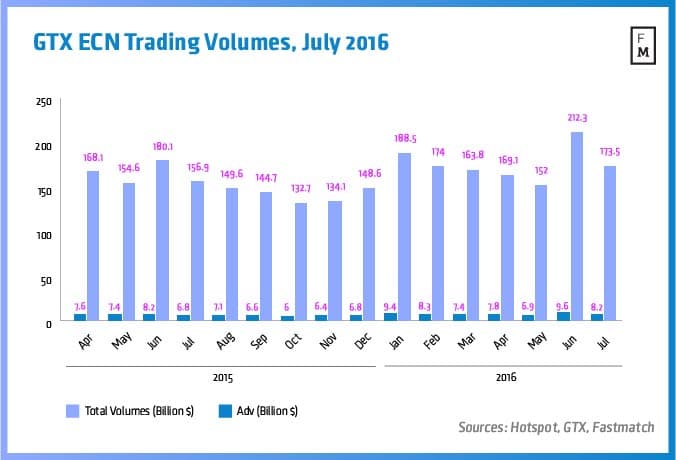 The foreign exchange trading venue operated by BATS Global Markets has reported that its July trading volumes declined by 13 per cent when compared to June to a total of $551 billion. The number was higher than a year ago by 2 per cent. 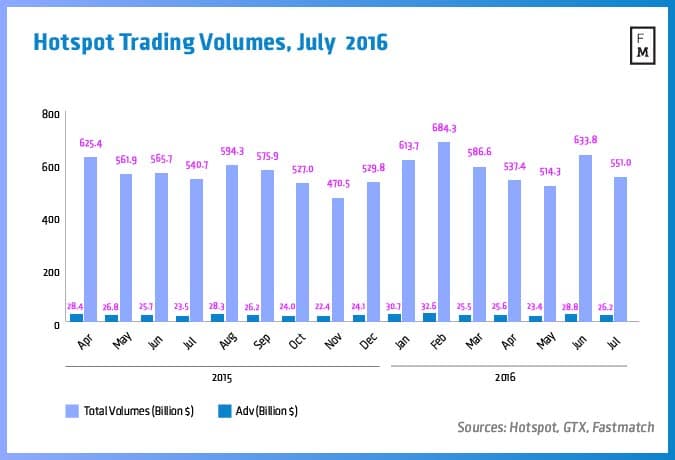 We are seeing trading volumes across the board broadly higher than in the same period a year ago. The notable difference for July trading volumes is that the totals are higher when compared to the months leading to June. Only January and February, which are typically very active, have netted higher volumes for major ECNs.

The prospects for August are for a repeat of the higher year-on-year performance, with some weight possible from the Chinese market once again. Money market rates in China in recent days have raised some eyebrows with volatility across local markets becoming jittery. Overall, the industry is probably looking at a decent month of August considering the pockets of uncertainty that are expected to increase trading activity.