The Bank of International Settlements has just released the preliminary results from its triennial survey of the foreign exchange market. The findings show that the global trading volumes in FX have declined by about 4 percent to $5.1 trillion daily. The previous survey’s result in 2013 showed about $5.4 trillion changing hands daily.

The main takeaway from the survey’s results is that spot trading has declined at the expense of an increase in FX swaps. This is the first decrease in FX spot trading since 2001, with FX derivatives markets not being affected by the shift in sentiment. 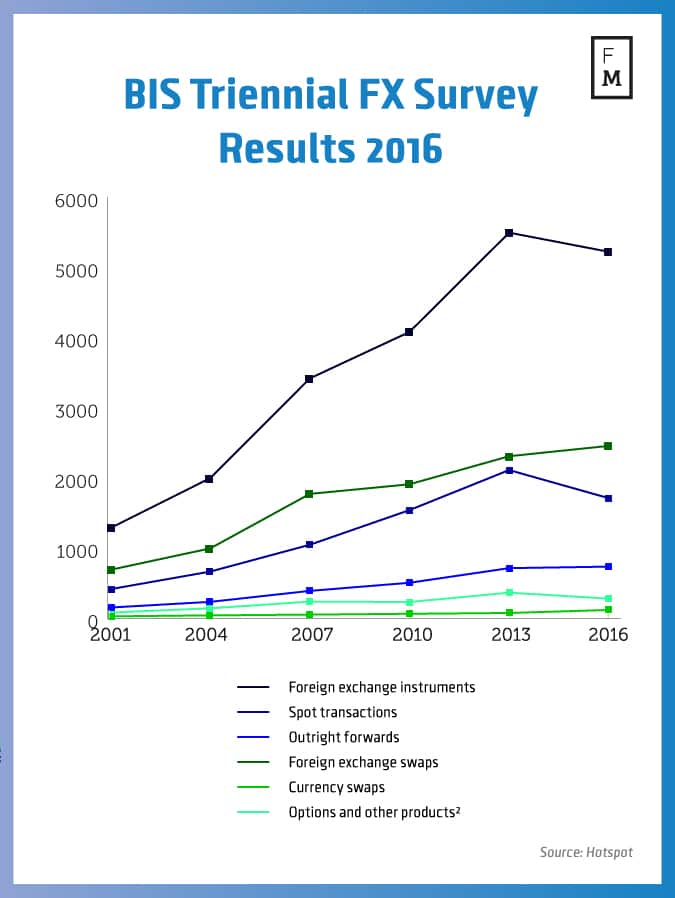 The decline could be in part due to the increased activity in April 2013 which was attributed to the rise in Japanese yen trading in the aftermath of the massive monetary easing unleashed by the Bank of Japan.

Looking at the most actively trading currencies, the share of the US dollar increased to 88 percent, which is higher by one percentage point. The euro remained in second spot with 31 percent, but declined by two percentage points. This marks a continued decline for the single European currency after it peaked at 39 percent in 2010.

The Bank of International Settlements (BIS) has highlighted the rise of emerging market currencies as the share of the Chinese yuan has doubled since 2013 to about 4 per cent with an average turnover of $202 billion daily in April 2016. This puts the Chinese renminbi in 8th spot amongst the most actively traded currencies in the world.

Inter-dealer trading has increased to account for 42 percent of total trading (up from 39 percent in 2013). Trading at banks which are not amongst the reporting dealers has accounted for 22 percent, while insurance companies, pension funds and other institutional investors accounted for 16 percent in third.

According to the survey results, global financial centers continued dominating the market in terms of market share – the top five were unchanged with the United Kingdom, the United States, Singapore, Hong Kong SAR and Japan accounting for 77 percent of global foreign exchange trading. The figure was higher from 75 percent in April 2013 and 71 percent in April 2010.

Share this article
Tags: Bis
Got a news tip? Let Us Know