The first earnings report of BATS as a publicly traded company has become a record for the company. At a time when global markets have been relatively jittery and a number of companies in the financial industry have faced a challenging environment, BATS Global Markets reported that the company’s adjusted earnings have grown 77 per cent when compared to a year ago.

The company has reported that its earnings totaled $30.1 million, with adjusted earnings of $35.6 million. The latter figure represents a 77 per cent increase when compared to a year ago, when BATS Global Markets registered $20.1 million. 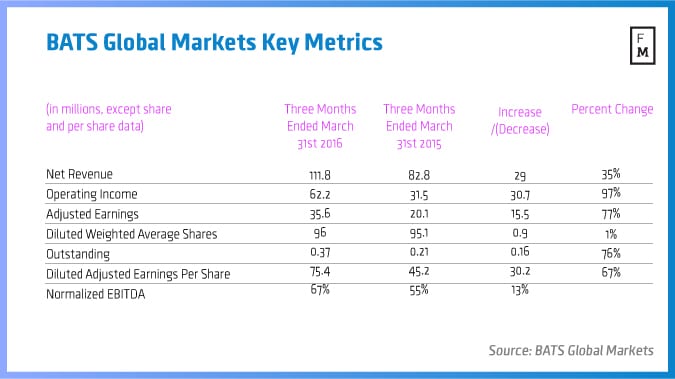 On a per share basis, adjusted earnings excluding tax-adjusted amortization and one-time costs totaled to $0.37 per diluted share when compared to $0.21 a year ago. The firm has also reported record net revenues totaling $111.8 million which is an increase of $29 million or 35 per cent when compared to the same period last year.

The company’s foreign exchange business Hotspot has gradually been gaining market share according to BATS Global Markets. A company spokesperson has confirmed to Finance Magnates that the FX subsidiary’s estimated spot FX market share of 11.8 per cent was against the firm’s major competitors EBS, Reuters and Fastmatch.

According to the earnings report, the market share of Hotspot has been consistently increasing every quarter since the completion of the acquisition of the electronic FX trading venue by BATS last year.

While the average daily volumes transacted through Hotspot in the first quarter of 2016 totaled about $29.4 billion, which is lower than a year ago by 6.3 per cent, the net revenues from the business increased more than three times to $10.4 million, when compared to last year’s $2.4 million. The net loss from foreign exchange business of BATS totaled $0.9 million in the first quarter of 2016, when compared to a loss of $4 million in Q1 2015.

The normalized EBITDA for the FX segment of BATS Global Markets totaled $4.1 million. The figure is over 4 times higher than Q1 2015’s $0.8 million.

BATS Global Markets has highlighted in its report that the firm continued increasing its market share in the US equities segment with the figure rising from 20.8 per cent a year to 21.3 per cent in Q1 2016. The European market share totaled 23.5 per cent, which is a touch lower than last year’s 23.7 per cent. The U.S. options segment increased substantially to take 10.2 per cent of the market, compared to 8.8 per cent last year. 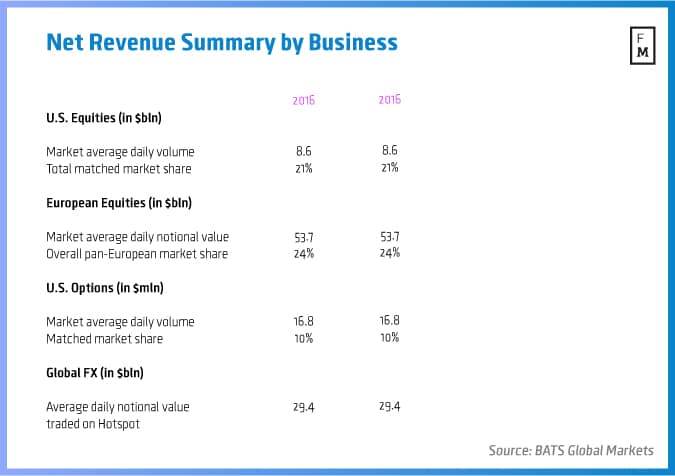 Commenting on the results of the company, which have beaten the consensus earnings estimates by analysts by $0.07 per share and by $4.8 million on the revenues side, the CEO of BATS Global Markets Chris Concannon expressed satisfaction with the company’s progress throughout the past year.

“The first quarter was further evidence that our scale and low-cost operating model continue to successfully deliver positive financial results, all while we successfully executed our IPO on our own market,” he said.

The Board of Directors of BATS Global Markets has also declared a regular quarterly cash dividend of $0.08 per share on the company’s outstanding common stock. The amount is payable on September 28th, 2016, to all recorded shareholders of the company at the close of business on September the 14th, 2016.