Nine out of 20 track European equities are supplemented by, among others, PowerShares EQQQ Nasdaq 100 UCITS ETF, a replication of the NASDAQ 100 Index, which ranks 13th and has a turnover of CHF 363.8 million (USD 372.9 million). 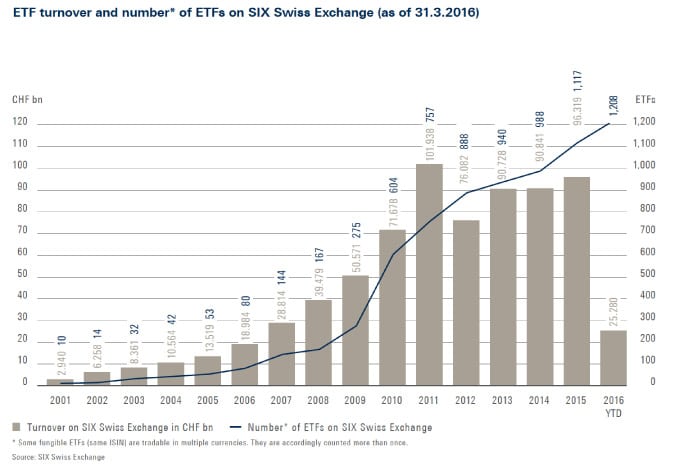 High volatility continued on the markets in the first quarter due to increased nervousness and fluctuations, especially in terms of commodities prices which have in some cases seen a dramatic fall. In addition, a weakening economy in several emerging countries and increased political challenges in the Middle East have caused many investors to turn more to investments in precious metals. This was reflected in increased trading turnover for both ZKB Gold ETFs in CHF and USD, which closed the first quarter with a turnover increase of 12.5% and 16.1% respectively.

During the first quarter of 2016, a total of 93 new ETFs were listed on SIX Swiss Exchange, encompassing 1,208 products which included 16 actively managed ETFs.

The products are listed on the stock exchange by 21 providers, with liquidity provided by 23 official market makers. In March, the Swiss Exchange welcomed new ETF issuer, Nomura NEXT FUNDS Ireland plc. The asset manager from Japan has four proprietary ETFs listed in various currencies on the Nikkei 225 and JPX Nikkei 400 and is also responsible for market making for the products. The four tradeable ETFs offer investors the opportunity to invest in the Japanese equity market with a currency hedge.