Cinnober, a financial technology specialist firm headquartered in Stockholm has reported that it has been selected by Africa’s largest financial trading venue. The Johannesburg Stock Exchange (JSE) will use Cinnober for the development of its new trading platform. The move comes as the century old exchange strengthens its position as a leading global trading venue.

Cinnober will extend its proven exchange technology to the South African exchange; it will be based on Cinnober’s TRADExpress Real Time clearing system. The new multi-asset platform will integrate clearing and settlement to enhance the overall trading structure.

The JSE an established exchange that dates back to 1887 which has a market capitalisation just shy of $1 trillion, there are over 470 listed companies traded.

The new Cinnober trading platform will replace JSE’s existing terminal that is operated by the London Stock Exchange, the platform, TradElect, was introduced in 2007 by the exchange.
The JSE offers a wide range of financial instruments including; stocks, bonds, derivatives, interest rate futures and currency futures. Riaan van Wamelen, the exchange’s CIO commented about the new development in the press briefing: “Modern clearing requirements and the evolving regulatory landscape result in significant technology demands for exchanges worldwide.

The project we are embarking on seeks to process all asset classes from all markets on a single integrated solution and will enable our strategy for growth. We are excited to partner with Cinnober in order to prepare for the future.”

South Africa’s reign as the sole derivatives trading venue in Africa came under fire when neighbour, Zambia, launched its currency futures offering the Bond and Derivative Exchange (Badex) completed its first live trade earlier this month.
Cinnober has been expanding its global footprint among developed and emerging market exchanges; it recently deployed its systems in the UAE as the DGCX replaced its trading technology. 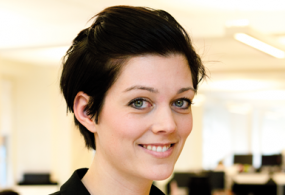 Veronica Augustsson, pictured CEO of Cinnober spoke about the firm’s selection by JSE in a statement: “This is a major milestone for Cinnober and we’re very proud that the largest African marketplace has signed up for our integrated clearing platform for their complete suite of six asset classes. JSE is an important national exchange with significant influence in the region, and places high demands on modern technology with high quality and true real-time capacity.”

South Arica is an established market place for financial trading, the country’s main financial watchdog regulates firms operating in the OTC and exchange traded markets. Margin FX and CFDs are popular among South Africa’s investor base with several international and domestic firms offering the products.