The exchange, whose share holders include the CME, saw volumes increase by 6% from a month earlier and a staggering 36% from figures published in 2012. The exchange underwent restructuring in 2012 and appointed a new CEO. Since his appointment Christopher Fix has taken the exchange to new highs with growth in volumes in 11 of the past 12 months and the sign up of three new members including; RBS and Mitsubishi Corporation.

Christopher Fix, CEO of the DME commented about the new record in trading volumes in a statement to the media, he said: “At a time when many exchanges are seeing their volumes squeezed, DME continues to buck the trend. This record is testament to the market’s desire for transparent pricing for the East of Suez market, something our DME Oman contract is unique in offering.

“With year on year volume growth of 15% in the first seven months of 2013 and an expanding membership base – particularly from Asia – DME is now a critical part of the global crude oil trading complex, at the heart of the East of Suez crude oil corridor.”

The GCC is home to an estimated 45% of global energy reserves, oil and gas. However the region lacks a recognised commodity exchange for participants to hedge their exposure and manage risk. The Dubai Mercantile Exchange acts as an ideal venue for local participants to trade close to home. The DME oil contract is still in its infancy and requires more participation to increase liquidity and make it more attractive when compared to Brent Crude or WTI.

ADS Securities, an Abu Dhabi based broker offers trade execution in the contract. Marc Aspinall, Head of Global Sales at the brokerage spoke to Forex Magnates about the contract, he explained: “There is clearly interest in Dubai Oil contracts as this is one of the only ways for local traders to put a regional oil (Oman) investment in their portfolio, but Dub Oil can be highly illiquid, with spreads as wide as 20 cents intraday compared to 3 cents for US and UK crude. Therefore, we find that regional investors, as well as those in Asia and Europe, tend to go for US WTI. This is an extremely popular CFD which is trading very well for us – demand is very strong and we can see this increasing especially with Saudi looking to re-price next month and the changing dynamics in the hydrocarbon marketplace.” 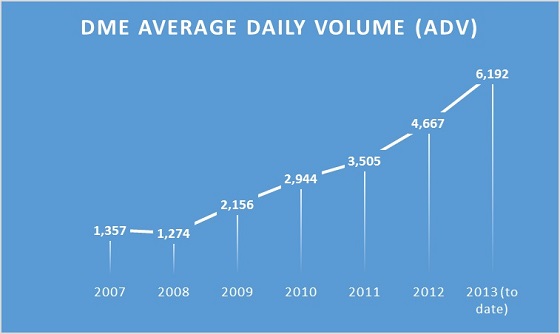 what is GCC stand for?