The Moscow Exchange (MOEX) posted its second quarter financials today. During the quarter, revenues rose 21.0% year over year to around $190 million (RUB 6.3B) and 14.2% since Q1. Net profit growth was even more impressive, as bottom line figures rose 51.6% from the same period last year. During the quarter, the MOEX reported net profit of $99.5 million (RUB 3.3B), as operating margins rose. On the news, shares are higher by 2% today to RUB 60.15.

On the volume side, the MOEX stated that total activity rose 31% from the same period last year to around $3.64 trillion (RUB 120.8T). In terms of individual units, Fixed Income outperformed other divisions, as trading increased 87% YoY. The activity in bond trading led to FX Swaps trading to rise 96%, even as Spot volumes were flat. On the discrepancy, the MOEX stated that Swaps gained “on the back of higher demand for interest rates products”. Overall in FX, the division reported total volumes of $1.24 trillion (RUB 41.2T). On the down side, equity volumes sank 31% compared to last year and mark  a continued decline taking place among stock trading activity. 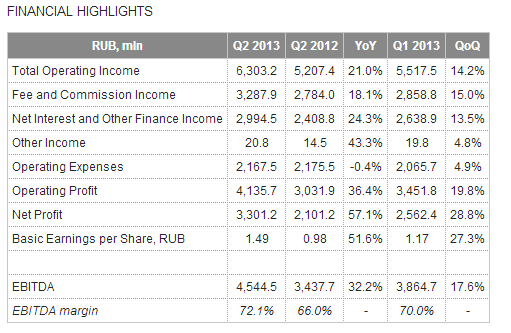 In their public statement, Alexander Afanasiev, Chief Executive Officer of Moscow Exchange, stated “Strong operating and financial results in the first half of the year, demonstrate that the strategic initiatives realized in recent months are in the right direction and focused on continued growth over the long term. For example, we are on track to complete the transition to T+2 settlement in the Securities Market, we launched a number of new products and we have attracted several Russian companies incorporated abroad to list on our markets. We became more attractive to local and international market participants due to successful reforms of the domestic financial infrastructure as well as our openness to change and innovation.”

Evgeny Fetisov, Chief Financial Officer of Moscow Exchange, added, “Our financial results were excellent in the quarter with a 57.1% YoY rise in net profit to RUB 3.30 bln, driven by a 21.0% YoY increase in total operating income while costs were controlled, declining 0.4% YoY. The largest growth line in income  again was fee and commission income, which grew in every one of our business segments and was up 18.1% YoY and 15.0% QoQ to RUB 3.29 bln.”

Share this article
Tags: moex / Russia
Got a news tip? Let Us Know